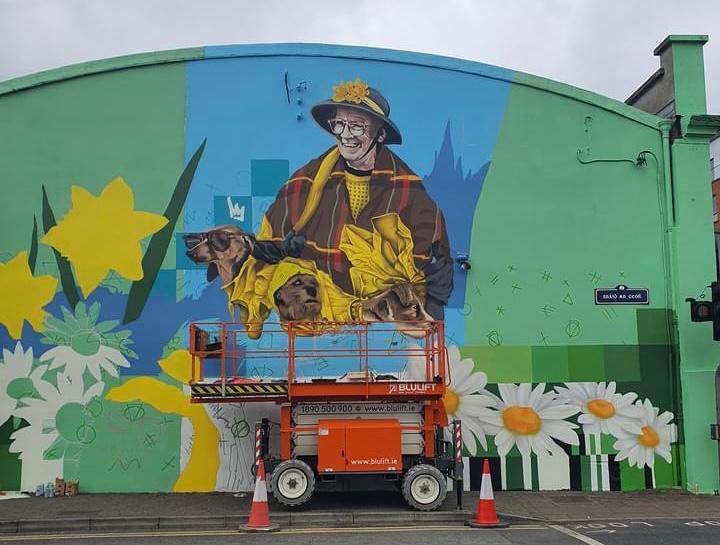 A mural commemorating Limerick’s beloved Dodo Reddan has been painted on the Saint John’s pavilion wall by talented artist Ominous Omin, an Irish Graffer, in collaboration with Draw Out. Dodo has been immortalised in paint in St John’s pavilion and her memory will not be forgotten.

Limerick City and County Council has funded the mural which is located at Sráid an Ceoil, St John’s Pavilion in Limerick city centre and collaborated with Draw Out to bring to life the tribute to one of Limerick’s most recognisable people.

Draw Out selected artist Omin to complete the mural. He was selected as a result of his technical ability and larger than life approach to portraiture. His work is full of vibrancy, joy and humour.

Dodo lived an iconic life as one of the city’s most colourful and memorable people. Dodo, whose real name is Nora Quirke, embodied everything that is great about Limerick – kindness, passion, determination, generosity, and of course, the love of rugby.

Dodo was a huge advocate for helping those less fortunate than herself, both animal and human. Well known for her pram full of pet dogs which she was rarely seen without, Dodo was an animal lover who would rescue and take in dozens of dogs throughout her life. She would also distribute food to the homeless, give toys to the city’s poorest children, and use her columns in the Limerick Leader to give a voice to the voiceless.

Dodo’s other love was rugby, more specifically Young Munsters RFC and she naturally became an iconic mascot for the club, appearing at every game with her pram of dogs, dressed to the nines in the team colours of black and amber. One of Dodo Reddan’s most memorable ventures was her journey to Lansdowne Road in Dublin, for the 1993 League Final between Young Munsters RFC and St Mary’s. The story goes that she had to travel in the goods compartment of the train with her pram-full of dogs as she was not allowed to bring them into the passenger carriages. Arriving in Dublin, no taxi or bus would carry her, so she walked her pram of dogs all the way to Lansdowne Road, arriving just in time to witness Young Munster’s historic victory. The crowd roared with glee at the sight of Dodo and her dogs, and her appearance has been documented as a fundamental memory from that day.

Speaking about Dodo, one Twitter user wrote, “Dodo Reddan was a true legend. Her regular appearances with all her dogs kitted out in black and amber was a fantastic sight. Fondly remembered.” Another added, “Can a Dodo Reddan mural be next? Strong Limerick woman, amazing animal lover and saver, and rugby obsessed.”

This request was answered by Draw Out, the Limerick-based Urban Art initiative.

This is blowing our minds its so good. What an impact it makes as you enter the city centre.
Feeling so proud to be from Limerick !! @ominous_omin pic.twitter.com/DQA4uCagiz

Draw Out was created by Catherine O’Halloran and uses the most creative resources to reinvent space both visually and functionally in Limerick’s urban landscape since 2012. Large-scale murals have been painted throughout the streets of Limerick, drawing local and national coverage of the project over the years.

Draw Out brings the best street artists from around the world to Limerick to re-imagine and transform the city’s derelict sites. Their vision is that we, as a city, begin to use space and the urban environment in an entirely new way, seeing beyond the limitations of function to create bold examples of the most innovative and contemporary Urban Art.

Draw Out works in partnership with Limerick City and County Council Culture and Arts Department and numerous other partners to procure and commission Urban Art in all its diversity of artistic expression for the revival of Limerick’s internationally recognised urban art festival. Embracing the fastest growing global art movement of recent years, the Draw Out Project has literally put Limerick city on the global map.

OBSESSED with the beautiful new Dodo Reddan mural going up in Limerick City, adding to our growing collection of remarkable women on walls, courtesy of @DrawOut

Catherine O’Halloran, Creative Director with Draw Out said, “Draw out are delighted to produce a mural featuring such an iconic and unique female figure, as Dodo Reddan. We were excited to develop this concept and bring the mural to life in a way that truly reflected the essence of such a vibrant and compassionate character. Our hope is that this work can do what only great portraits seem to master, reacquaint us with the magic of her spirit and inspire a new level of appreciation for a life so well lived. What an incredible reaction so far. We couldn’t be happier with this showstopper.”

For more information about Draw Out go HERE

Dodo Reddan Mural pictured at the top of William Street