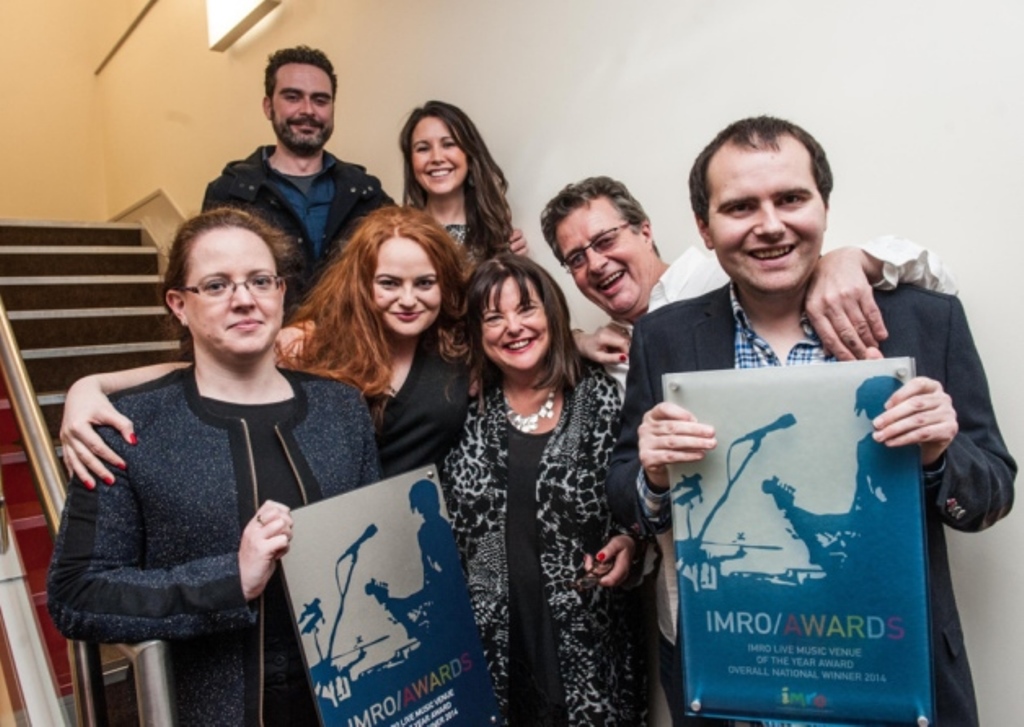 Pictured above: Members of staff from Dolan’s and UCH with their awards. Front – Sinead Hope, Sarah, Valerie, Mick and Neil Dolan. Back – Paul Boland and Emma Foote. Picture by: Ruth Medjber.

Dolans, on The Dock Road, who recently celebrated 20 years in business, was crowned National Live Music Venue of the Year 2014 at the IMRO Awards in Dublin on Tuesday.  Awarded after public vote, it is amidst the top honour in the industry, and Dolan’s saw off competition from 24 venues around Ireland to accept the award. Having celebrated the 20th anniversary with a concert with The Waterboys in December and the opening of their new venue, Kashah Social Club, it couldn’t be a better time to be awarded such an honour.  Mick Dolan said “We are thrilled, fantastic. To beat all the big boys, if you like, Vicar Street, the whole lot, and to come out top of the pile, is fantastic. We are absolutely over the moon. There has been a great reaction from people; the goodwill is phenomenal, from people in the business and everything – just fantastic.’’

Mick went on to say ‘’It (the award) has a high profile and is a big platform for us to get the name out there and I think with the other venues as well, the Big Top is really on the map now. We have done a lot of work in the venue in the last year as well – a new PA, and we upgraded everything so it is the perfect year for it. And last year was the 20th year, so it is special.’’

Along with Dolans, The University Concert Hall won at the IMRO Awards, winning IMRO Munster Live Music Venue of the Year. Manager of the UCH, Sinead Hope, said they are ‘delighted to be part of Limerick’s great success at this year’s IMRO awards. It is the first time UCH has won and it’s great that it is in recognition of 2014, when we were so busy with City of Culture events such as Van Morrison and Limerick’s Dream Will Do.’’

Sinead continued saying ‘’People associate UCH with a lot of different art forms – for some people we are the go to place for Orchestral music or Opera, for others UCH means big name, stand-up comedy or family time at the Panto, but every year there is a strong backbone of live music to the UCH programme and 2014 gave us some great nights. The award is also a lovely way to recognise the dedication of all the UCH staff who work so hard throughout the year.’’

From Print to Postcard Limericks ghost stories at The Park Kiosk