By Richard Lynch on December 12, 2019@richanthon 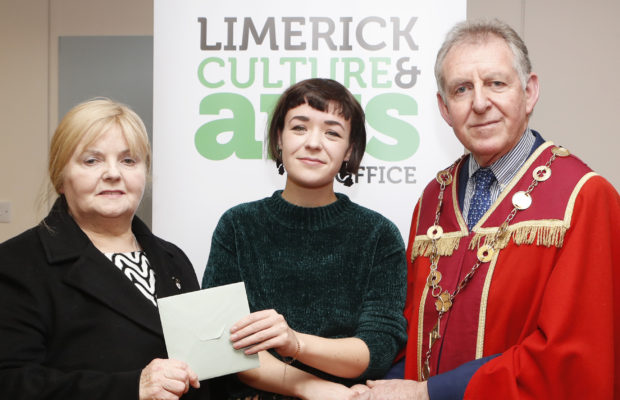 Eileen O’Riordan was the guest of honour as Limerick City and County Council presented a number of bursaries to artists including one to Emma Langford, who is the first person to be awarded The Dolores O’Riordan Music Bursary Award.

At a special private event, Dolores’s mother Eileen attended to present the bursary to Emma Langford.

Limerick has outstanding artistic talent and these bursaries are designed by Limerick City and County Council and approved by the elected members to ensure that creative people continue to live and work in Limerick and showcase their creativity to the world and providing them with opportunities to connect locally and internationally through their work.

Originally from Cratloe, composer Fiona Linnane has been based in County Limerick for 10 years. In 2000, she graduated from University College Cork with a Bachelor of Music and continued her studies with a Master’s in Music Technology from University of Limerick (specialising in electro acoustic composition). She is the director of new music ensemble CoMA Limerick and is represented by the Contemporary Music Centre, Dublin. This bursary will allow her to complete the song cycle “Songs from Kate O’Brien” (music: Fiona Linnane, lyrics: Mary Coll). To compose four new songs for Soprano, to revise and edit the existing eight songs for publication and performance, and to consult with Soprano Roisin Walsh during composition.

Gavin Hogg has been a practising artist for nearly 30 years. He studied in Limerick School of Art and Design from 1983-87, going on to complete a Master’s Degree in Birmingham in 1988. He has exhibited widely and won numerous awards (EVA award winner’93) and achieved wide critical appreciation for his work. Hogg’s work is included in many public and private collections, including the Arts Council of Ireland, University of Limerick, Office of Public Works and the New York City Public Library (print collection). This bursary will allow him to build a website incorporating video exploration of nine new paintings, accompanied by commentaries by the artist, describing his creative process. Professional framing, in order to present work to audiences.

Mary was founder Artistic Director of Daghdha Dance Company (1988-1999). Throughout her career, Mary has created a substantial body of critically acclaimed solo and ensemble choreographies that have been performed at national and international venues and festivals including London, Berlin, Munich, Paris, and Mexico. The screen adaptation of her dance-theatre work ‘Territorial Claims’ was selected for screening at the Lincoln Centre’s Dance-for-Camera Festival in New York City. To create a work-in-progress entitled “The Hood” through a collaboration involving Jo Slade (poet/visual artist). Guided by mentor Guy Cools, using the theme of the contemporary ‘Hoodie’ to explore (through text/ movement/dance) the mystery and the fear of that which is not known: the other.

From Limerick, Helena has published four novels under the pseudonym, Sarah O’Brien, with co-writer, Trisha Rainsford. She has also written three novels under her own name and is currently writing a play called the Red Army with local theatre practitioner Marie Boylan. This bursary will allow Helena to write a collection of short stories with a water location, sometimes subtle, sometimes more obvious, offering a snapshot in time of present-day Ireland and, by extension, Limerick, and our summer pilgrimage en masse to the Clare coastline.

Mary studied graphic design at Limerick School of Art and Design and taught there as well as Mary Immaculate College, training the next generation of art teachers. She established Tabula Press Fine art publishing in 2006 and since 2014 has been engaged in fine art practice working in mixed media compositions and small sculptures. This bursary will allow her to hold a solo exhibition MEMORABLE, at the LSAD Gallery, to honour the lives of the women incarcerated in Ireland’s Magdalene Laundries.

Ciara is a young artist who moved to Limerick to study art. She is currently artist in residence in Ormston House and was a co-founder of SpaceCraft Studios in Limerick a new studio for young artists. This bursary will facilitate the development of a new interactive installation, with electronic, sensor and movement elements. To collaborate with computer engineer, James Poole and to invest in materials and equipment.

This bursary scheme, in its second year, was first proposed in light of the development of Troy Studios with the aim of supporting professional Limerick-based filmmakers, established and emerging in all genres, to foster and support the development of original film production.

We were delighted to receive applications for film projects at all stages, whether in the initial phase of research and development or at the later stages of production.

This year’s recipients are:

Film synopsis: On the anniversary of their childhood friend’s disappearance, Ciara and Robert meet to go on a hike to their old teen hangout to honour their friend’s memory. On their journey, they are stalked by a restless spectre and are forced to confront their darkest desires when they reach their destination.

Grace Quilligan is a graduate of the National Film School in IADT, majoring in direction and minoring in production. She is an award-winning freelance filmmaker.  With principal photography to be shot entirely on location in Curraghchase and Shanagolden, County Limerick.

‘Imbas Forosnai’ is a short film written by spoken word artist Shane Davis, directed by filmmaker Shane Serrano, with the consultation of Irish archaeologist and folklorist Billy Mag Fhloinn. ‘Imbas Forosnai’ was an ancient Irish pagan ritual used for prophetic purposes or to seek advice from the Otherworld.

Founded in 2008, by Shane Serrano, Crude Media is an independent film and video production company operating from Limerick. Crude Media has become a recognised name in Limerick and across the country, producing over 600 pieces for the web and television.

Made in Limerick Creative Ireland Grant

Originally from Tyrone, singer Kathleen Turner has adopted Limerick as her home since she moved here in 2006 for what was originally only supposed to be 10 months. Kathleen describes herself as a singer, songwriter and community musician, who fuses her music with a bit of folk and a bit of soul. For independent songwriters, music videos are an invaluable format for presenting 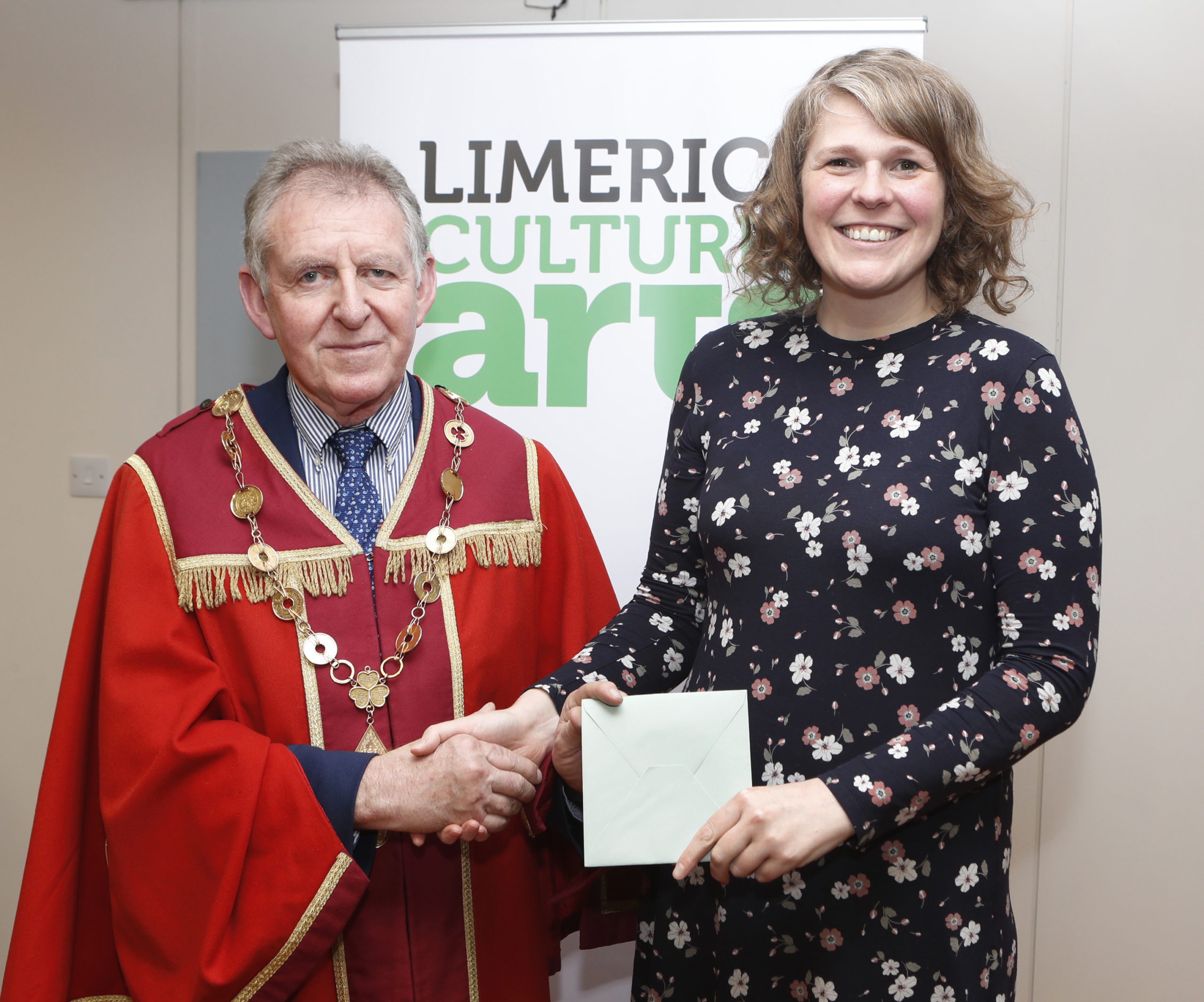 new work on a variety of platforms. These are especially valuable when helping to visually communicate the lyrical and musical content of a song. This bursary will allow Kathleen Turner to create two bespoke music videos to accompany two original tracks from her first full-length album, Like a Lion, which is due for release soon

Cian is an Irish director/producer. He was born in Kerry but has spent most of his life living Limerick. Cian attended Glenstal Abbey School where he spent his teenage years learning filmmaking and submitting to Fresh Film Festival. Now a graduate of National Film School IADT, he has developed a strong portfolio of both documentary and fiction based film. This bursary will allow Cian to make an exciting short documentary film called Sit Down And Shut Up’ about the David vs Goliath tale, which was the 1981 European Cup match between Limerick and Real Madrid. This is a film about Limerick of the past, the opera of football and a portrait of an older generation of Limerick’s heroes.

Dolores O’Riordan, singer, songwriter and lead vocalist with The Cranberries, was one of Ireland’s most enduringly popular artists.

Limerick City and County Council in discussions with Dolores’ mother Eileen and her family wanted to find an appropriate way that Limerick can remember and commemorate the global superstar.

Following discussions, it was agreed that The Dolores O’Riordan Music Bursary be established to support a Limerick professional musician to develop their career. Music was such a rich part of Dolores’ life and she brought great attention to Limerick and the creativity that exists here, so it was fitting that in October 2019, Limerick City and County Council issued an Open Call for Limerick-based professional musicians to submit applications for the bursary of €4,000, to develop their artistic practice.