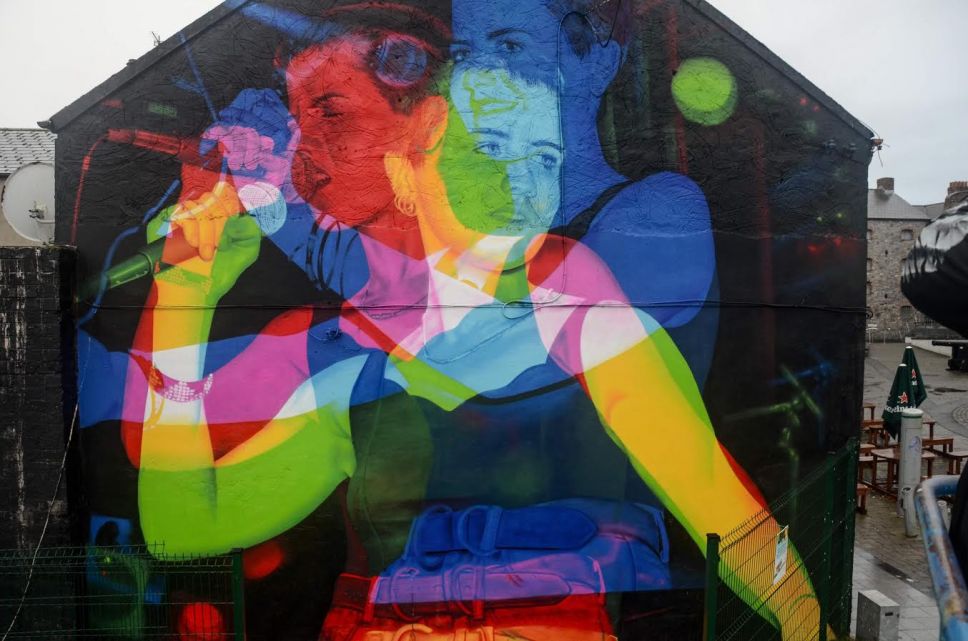 After several weeks of work, the mural for the late Dolores O’Riordan has been completed near King John’s Castle in the Medieval Quarter of the city.

The piece was created through a collaboration between the urban art festival Draw Out and the Dublin street artist Aches. The piece is part of many artworks that celebrates the influential women of Limerick, both past and present.

The artist Aches pictured with Wally Cassidy after the completion of the special mural. Mural pic by Wally Cassidy

The Dublin street artist  Aches has overlayed three separate images of Dolores performing onstage back in 1993, using a special style which he calls ‘glitch graffiti’. Aches is well-known for his unique style, such as a mural of Savita Halappanavar in Portobello, which he painted the night before the Repeal The 8th referendum.

According to the organizers of Draw Out, the Dublin-based artist chose to paint Dolores as a young woman in order to immortalize her at the peak of her career in a way that feels both positive and respectful.

Catherine O’Halloran from Draw out said, “Aches has surpassed the level and blown every other artist in the country away! This guy is the best we have to offer at the moment and Ireland’s superstar. What a talent and a gent. We will be forever grateful. Thank you”.

Limerick City and County Council has provided funding for the series of murals depicting strong and influential women across Limerick city to be created by Draw Out. The first piece unveiled was a beautiful and powerful depiction of Constance Smith in the Medieval Quarter of Limerick, which was revealed earlier this month.

Draw Out is a local, urban-art initiative created by Catherine O’Halloran that uses the most creative resources to reinvent space both visually and functionally in Limerick’s urban landscape since 2012.

Various sites throughout Limerick are in the process of being painted and will be presented to the public over the next few weeks.

In other Dolores news, after 30 years The Cranberries finally received a nominee for Best Rock Album on Wednesday, November 20 when their final album, ‘In The End’ was announced in the run-up for a Grammy.  The announcement comes almost 2 years after the death of lead singer Dolores O’ Riordan and features vocals recorded of her prior to her death in January of 2018.