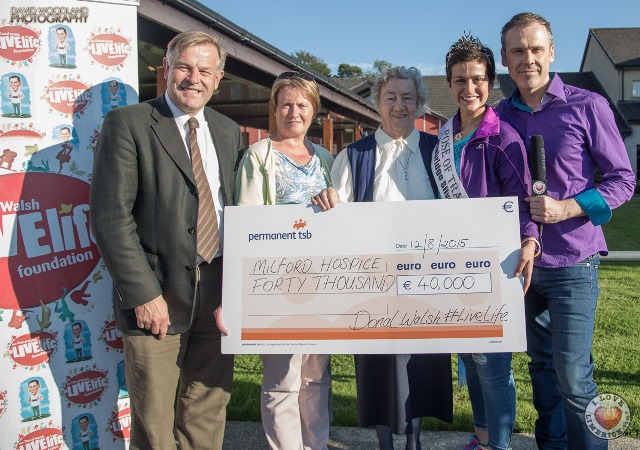 The 2014 Rose of Tralee Maria Walsh with Richard Lynch. Photo by David Woodland.

Exactly halfway through her 242km Trek2Tralee fundraiser journey from Mayo to Tralee, 2014 Rose of Tralee Maria Walsh stopped off  in Limerick where Elma Walsh made an amazing €40,000 Milford Hospice donation on behalf of the Donal Walsh #LiveLife Foundation.

Speaking to Elma who now carries her son’s mental health awareness and anti-suicide messages she said: “Today we have the pleasure of giving €40,000 to Mildford Hospice from the Donal Walsh Foundation. In the foundation we don’t ask anybody for money, people have given us money from various different fundraising events so there was quite a bit of money building up from Limerick school fundraisers, Munster Rugby and the Adare Manor golf fundraiser which raised €20,000. We have given €5,000 to Pieta House and €5,000 to Console Limerick and now it is the Hospice’s turn. Donal’s foundation was set up because people sent us so much money and because Donal spoke out on television about hospice care and mental health so they are the issues we follow up on.” Speaking about Donal, Elma continued: “Donal was just a normal young fella in all honesty and when he was 12-years-old he got cancer in his leg and he fought it very well for three years but unfortunately after that it came back in the lung and a short while later it became terminal. He knew that his would be a short life here, he was terminally diagnosed in October 2012 and he lived until May 2013. Before he went, he was on television as he was invited on by Brendan O Connor and it was there that he spoke out on his platform about his anti-suicide message and the care facilities in hospitals and hospice’s and he wanted them improved for teenagers especially, he was an ordinary 16-year-old boy who saw the devastation suicide caused to families and he wanted to try and stop that.”

A heartwarming moment with Maria Walsh and Elma Walsh from the Donal Walsh Foundation . Photo by David Woodland.

“The foundation is primarily to help teenagers. We are giving this money to Milford Hospice because they are doing and extension and we want to make sure there is going to be a teenage section included for ill teenagers who come to Milford for care.”

Pat Quinlan CEO of Milford Hospice said “To see the Donal Walsh Foundation donate to Milford Hospice is a godsend. We have made a decision in Milford to build a brand new, purpose-built, hospice unit to serve the Mid-West and the unit will consist of 34 single rooms, at the moment our rooms and shared so we are trying to create the situation where every patient can have a private single room. It is a major project that we have undertaken, there is a large element of fundraising involved to raise the money we need so we are very fortunate that the Donal Walsh #LiveLife Foundation, through Elma, has kindly made a donation of €40,000 towards the project.”
The 2014 Rose of Tralee Maria Walsh was on hand to support Elma and the Donal Walsh #LiveLife Foundation with their donation. Her last project of her year as Rose of Tralee is a Trek 2 Tralee event where she will be running, cycling and walking 242 kilometres to raise funds for three worthy Irish charities, the Donal Walsh #LiveLife Foundation, Barretstown and Development Perspectives.
Maria, who is currently taking part in her last project of her year as Rose of Tralee while actively fundraising for Donal’s Foundation said: “It’s great we are 121KM out of 424KM so we are exactly half way and it’s great, there’s no better place to be than Limerick for the halfway mark.”
Speaking about her motivation for taking part in the 242KM trek Maria said: “The motivation for this has come in many different ways I chose three specific charities to empower me, I felt that they really empower their communities; Donal Walsh #LiveLife Foundation, Barretstown and Development Perspectives. We had Bobby McCormack from DP with us today, we met Elma Walsh from Donal’s Foundation and all of those energies really help. You are always chatting to people from the charities involved, pulling stories and energy from them. Jim Breen the inventor of Cycle Against Suicide is also here and part of our trek as one of our cycling mentors and he has a great group of Cycle Against Suicide with us too so all of that combines and gets you 121KM right over the line.”
Maria will be taking part in a huge host of events over the International festival happening this weekend August 14-18 including a Tandem Skydive on Sunday into the town ark to kick off the air show.
Speaking about her experience as the International Rose of Tralee Maria said: “What am I going to miss the most? Meeting people. I love people so it is easy work for me. The crown and sash becomes a bit of your armour and you get so used to it but: armour no more!”
The International Rose of Tralee festival takes part this weekend starting from Friday August 14 and continuing until Tuesday August 18 when a new Rose will be crowned.
Follow and donate to Maria’s Trek2Tralee here.
Follow Maria Walsh on Twitter and Facebook here and here.
Donate to the Donal Walsh #LiveLife Foundation here.
Follow Donal’s Foundation on Twitter and Facebook here and here.
Visit the Milford Care Centre Website here.
Follow Milford Care Centre on Twitter and Facebook here and here.

Photos by David Woodland for I Love Limerick. All Rights Reserved.