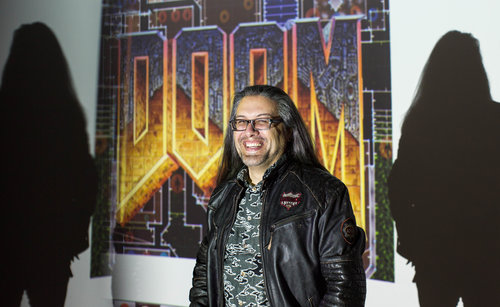 DOOM Programmer Speaks to sell out crowd in Lero

Lero, The Irish Software Research Centre was the host to Programmer and Game Designer John Romero.  In a sold out talk at the software centre Romero talked about his iconic works, from Wolfenstein 3D, DOOM and Quake.

The talk took place on Friday 5 February, in Lero situated in the Tierney Building at the University of Limerick. The 25 minute talk was followed by a Q&A with John Romero.
John Romero is an award-winning game designer, level designer and programmer whose work spans over 130 games, 107 of which have been published commercially, including the iconic works Wolfenstein 3D, DOOM and Quake. Romero has worked in the mobile, hardcore, mid-core, casual and MMO space. Romero has co-founded eight successful game companies including the likes of id Software, Gazillion Entertainment and, most recently, Loot Drop which is celebrating its 5th anniversary in 2015. He is considered to be among the world’s top game designers, and his products have won well over 100 awards. One of the earliest indie developers, Romero began working in the game space in 1979 on mainframes before moving to the Apple II in 1981. He is a completely self-taught programmer, designer and artist, having drawn his inspirations from early Apple II programmers. Romero co-owns Loot Drop and Romero Games.

id Software burst onto the gaming scene in 1990 with their side-scrolling hit, Commander Keen. The next six years would see id Software pioneer a new genre, the first-person shooter, with their hit game Wolfenstein 3D. id’s games were made in record times with some games finished in one month.

At the talk the audience heard of how id Software began from a small team of three people until the shipping of the massive hit Quake in 1996, and the programming principles that helped them ship fast with solid code.

International Womens Day 2016 Lunch in Assocation with the Hope Foundation