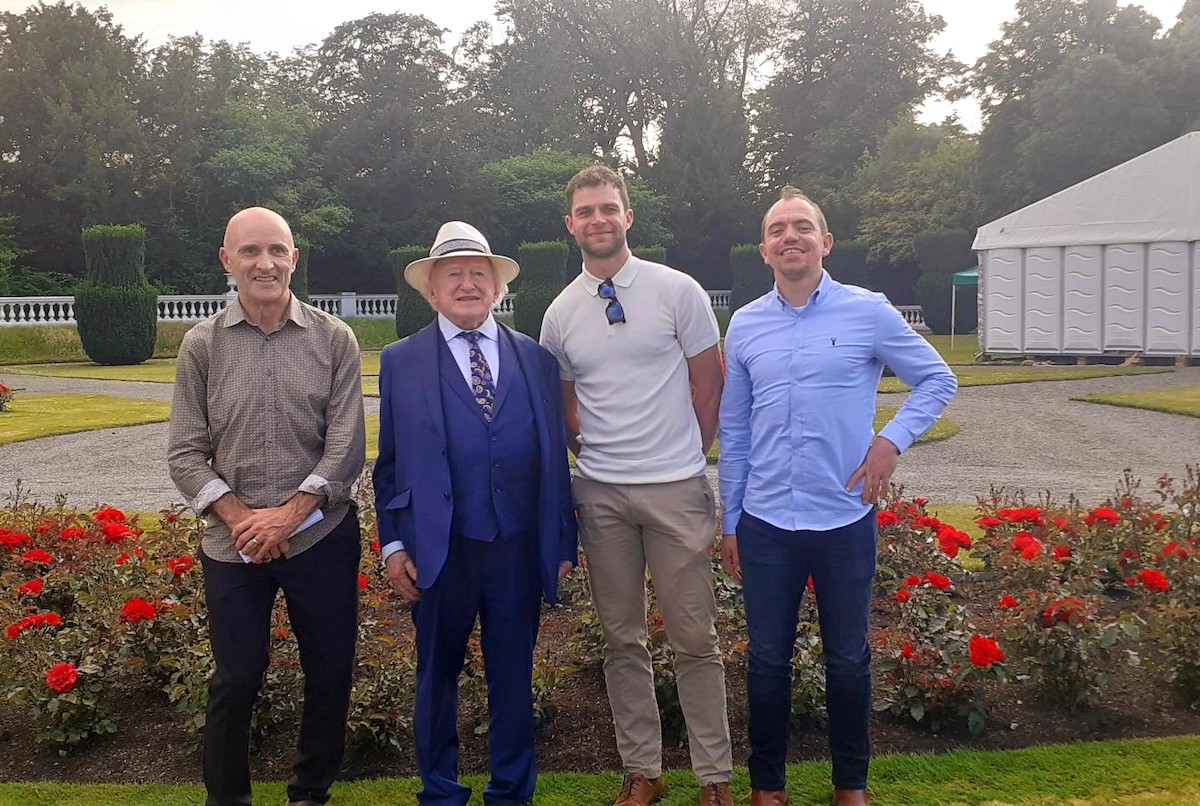 Ahane Co. Limerick native Noel Richardson joined President Higgins at the Áras on June 23rd at an event calling for a culture change in more actively engaging men in gender equality issues nationally and globally. Speaking in the context of the UN’s ‘HeforShe’ campaign, President Higgins stressed how important he felt it was to use his office to convey a simple but vital message: that men must stand in solidarity with women if women’s rights are to be fully achieved. As a global ambassador for the HeforShe campaign, he called on people around the world to stand together as equal partners to craft a shared vision of a gender-equal world, and to specifically undertake the challenge of engaging men and boys to promote gender equality, and to combat gender based violence.

Dr Noel Richardson is the founder of the National Centre for Men’s Health at the South East Technological University (SETU). He is well known as a pioneer in the area of men’s health at a research, policy and advocacy level, and is also respected for his achievements in the area of athletics as a coach and former international athlete.

“It’s clear there are major issues that need addressing but change is afoot and I think the President’s rally cry is part of this movement” said Dr Richardson.

“I think the vast majority of men are in favour of a more equal and inclusive society for all. However, men now need to step up to the plate and demonstrate more tangible commitments towards accelerating gender equality. Men need to be part of the conversation from the outset and to actively engage in solutions to address gender-based inequalities and challenges in society. An important part of this is continuing to reconfigure masculinity practices that enable men to assume a more prominent role in caring and household responsibilities, including the care of their own health. I think the moment is arriving where we now finally understand what needs to happen and how, it’s just a question of leadership and determination to work towards a more equal and fairer society for all.”

Noel was joined at the Áras by his colleague Conor Hammersley, a PhD scholar based at the National Centre for Men’s Health at SETU in Carlow was one of the invited guests at the garden party event hosted by the President. Conor, a panelist of the 2019 All-Ireland winning squad and from a well known GAA family in Clonoulty, has been researching the area of men’s health and masculinity for the past 3 years and is a leading voice for change. His work was recently honoured by the awarding of a prestigious Fulbright scholarship that will see him travel to New York where he will continue his research with leading experts at Columbia University. Conor was joined by his brother Kieran at the event.

Speaking about his trip to the Áras, Conor says the President’s call to action puts a timely spotlight on issues that need greater attention.

“A more equal society is one where everyone benefits – there is an alarming rate of male suicide in Ireland, with many men not presenting with the challenges that they face. Much of this is associated with the performance of ‘man’ – in that, men often feel the need to project themselves as strong, self-sufficient and removed from help-seeking. Often this suppression of emotions presents itself in other ways such as substance abuse, (gender-based) violence and self-harm.  It was great to hear the President speak out and encourage men of all backgrounds to be active agents of change. He rightly outlined the critical role of men in shaping healthier societal norms. My own research has shown me that there are sub-populations that are more at risk than others – hence, why we need targeted interventions of support. By contesting hyper-masculine norms and creating change, everybody benefits, men, women, and society as a whole. It leads to better and more equitable outcomes for all – including men.”

Speaking after the event at the Áras, author, campaigner and former member of the Council of State, Ruairí McKiernan, congratulated Dr Noel Richardson and Conor Hammersley on the growing recognition for what he called ‘their tireless dedication to shaping a new understanding of men in society’.

“I’ve followed Noel and Conor’s work for years and it has helped shape some of my own work, especially when it comes to men’s mental health and the need for love, respect and equality across all genders. I think the writing is on the wall when it comes to taking action in a range of areas, including challenging misogyny in society and the unacceptable levels of violence against women and trans people, and indeed violence in our world in general. We’re at a point now when men are realising we need to open up more, to share more, to face up to our challenges, and be able to see vulnerability as a strength. It’s also about shifting the narrative to listen to men, to involve them, to create systemic change that is more compassionate and equal for all.”