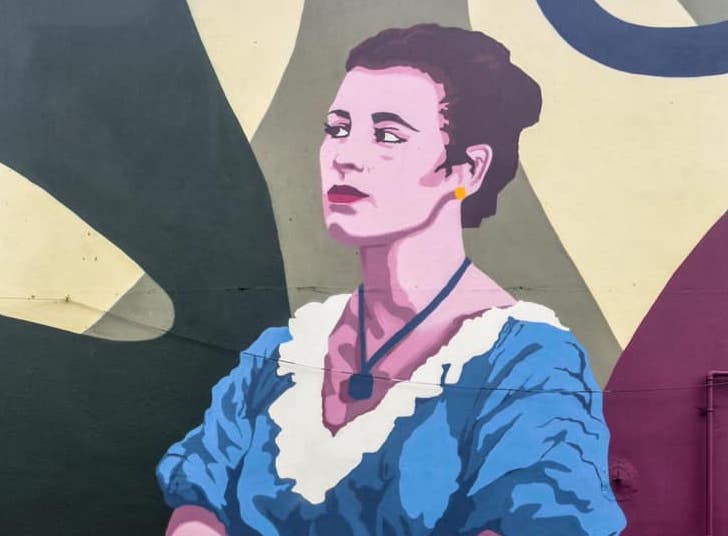 Draw Out Urban Exhibitionist: The first piece unveiled in a series of staggered reveals is a beautiful and powerful depiction of Constance Smith in the Medieval Quarter Limerick. Photo credit: Wally Cassidy

A mural depicting the world-renowned Hollywood actress and Limerick native, Constance Smith, is the first in a series to be unveiled by Draw Out Urban Exhibitionists in conjunction with Limerick City and County Council.

Limerick City and County Council has provided funding for the series of murals depicting strong and influential women across Limerick city to be created by Draw Out. Draw Out Urban Exhibitionist

The first piece unveiled in a series of staggered reveals is a beautiful and powerful depiction of Constance Smith in the Medieval Quarter of Limerick on the gable end of Limerick’s Treaty City Brewery on Nicholas Street, a location that was chosen as the perfect spot for this memorial piece.

Constance Smith was born in Limerick in 1928, who became a significantly prominent actress in Hollywood as a successful feature film favourite. She fought for her position to be recognised as a leading-role star and although her life was troubled, her tenacity is what defined her and garnered her a reputation for being strong-willed and fierce and for always staying connected to her Limerick roots by refusing to change her name just to please the film industry.

Draw Out is a local, urban-art initiative created by Catherine O’Halloran that uses the most creative resources to reinvent space both visually and functionally in Limerick’s urban landscape since 2012. Artists such as Maser, Askew One and Best | Ever to mention a few, simultaneously created large-scale murals throughout the streets of Limerick, drawing local and national coverage of the project over the years.

This year Draw Out is celebrating the influential and powerful women in Limerick, past and present, looking at how these women represent Limerick. By highlighting and celebrating their place in history, these murals will help the public and visitors to Limerick understand the effect these women had on their contemporaries but also understand how they have shaped the landscape for future females.

The way the artists interpreted what women in Limerick represent has been so varied and broadly researched and we are proud to facilitate such an honouring representation of the spirit of female power and influence in a city steeped in uniqueness and spirit.

The Constance Smith mural was honoured by two artists from Ireland’s thriving artistic collective SUBSET. SUBSET is a Dublin-based artistic collective made up of painters, photographers and videographers who use their voice to create impactful and memorable artwork across various mediums with social commentary running through each piece.

Draw Out are honoured to have hosted such a prestigious and talented collective and that SUBSET put thought and effort into their research of Limerick, inevitably choosing to honour such an incredible woman from our past.

Various sites throughout Limerick are in the process of being painted and will be presented to the public over the next few weeks. Draw Out are extremely excited to see the reactions to the following projects, what they depict and how they are processed by the people of Limerick and beyond.

Draw Out works in partnership with Limerick City and County Council Culture and Arts Department and numerous other partners to procure and commission Urban Art in all its diversity of artistic expression for the revival of Limerick’s internationally recognised urban art festival.