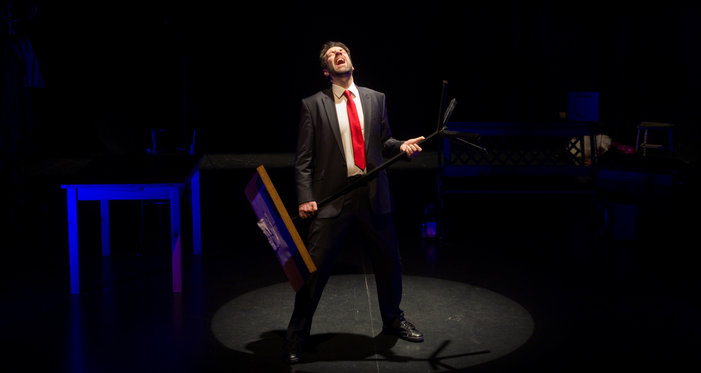 The one man play Drinking in America is coming to Dolan’s Warehouse on Thursday 7th and Friday 8th September. Presented by Bottom Dog Theatre Company the play is written by Eric Bogosian and Patrick J Byrnes.

Drinking in America, by New York playwright Eric Bogosian, is a Drama Desk award winning one-man play from the 1980s but which had yet to be performed in Ireland. It received its Irish premiere from Limerick’s leading theatre company this February.

Drinking in America also sees the return to the stage of Bottom Dog’s Artistic Director and actor Liam O’Brien, playing 12 distinct roles in his most challenging performance to date. In an acting career that has taken him worldwide with the likes of Edward Hall’s Propeller Shakespeare company, the West End production of the Rat Pack and of course several years starring in ITV’s Emmerdale as curate Ethan Blake, Liam has focused largely on producing and directing for Bottom Dog since 2012.

Five years since he last performed in a Bottom Dog show, O’Brien said the time just felt right to get back on stage in Limerick. His success in applying for a small theatre bursary from Limerick Arts Office, also allowed him to contract New York director Patrick J. Byrnes and musician Stephen Ryan (windings/giveamanakick) to collaborate with.

O’Brien said “It felt like an exciting opportunity for both myself as a performer but also for Bottom Dog. To try something new. To showcase a play never seen here. And we kicked off the 9th season with something dynamic by working with a new director and involved Steve (Ryan) much deeper in the creative process than we ever had before. We’re grateful to the Arts Office for their support in originally facilitating these collaborations and now we’re back but Upstairs at Dolan’s to launch a nationwide tour. We are doing it entirely without funding this time, so we are hoping the Limerick crowds who missed it earlier in the year or enjoyed it might come again to help us get the show on the road – and continue to showcase Limerick’s vibrant theatre artists across the country as we’ve done for the past 9 years.”

Choice prize nominated musician Stephen Ryan who previously wrote original music for the company’s The Revenger’s Tragedy, What Happened Bridgie Cleary and The Bachelor of Kilkish composes again. This time he also performs live on stage, adding an exciting onstage dynamic with Liam as he interacts sonically with the various characters and scenarios – itself another first for the play in production.

Drinking in America, described by the New York Times as “a breakneck, hair-raising comic tour of the contemporary American male psyche”, features O’Brien in a multitude of different parts from a grasping show-biz hustler; a latter-day Willy Loman on the road to a ghetto junkie. Though the material was written and performed first in the mid-1980s, O’Brien cites the rise of Donald Trump as one of the main reasons for choosing to perform it.

“When we first looked into producing the show, Trump had been nominated as the Republican candidate for president. The play had been sitting on my shelf for a decade. I loved it but often thought perhaps it was too dated to perform. But then I started hearing the words Trump was using. I was seeing the kind of vitriol he was generating. I was witnessing all the sorts of negative addictions – both literal and metaphorical – that I thought America had left behind, rising back to the surface. So there sat a play which hadn’t felt that relevant over the years, feeling more immediate than ever. Since we last staged it, you only have to watch what’s happened in Trump’s America to know that sadly the world has turned a dark corner, and this play very much touches on that”.

Director Patrick J. Byrnes had worked on one of Bottom Dog’s famed rehearsed readings briefly in 2011 and was a natural fit for the show which was written by one of his contemporaries while growing up in New York in the 1980s, Eric Bogosian. Patrick is an accomplished director and actor himself, and most recently was seen in Oliver Stone’s award nominated film, Snowden.

Playwright Bogosian originally starred in his own one-man plays, but Drinking in America has since been performed by other actors in Brazil, Italy and Poland but not yet in Ireland. Bottom Dog was delighted to host the Irish premiere in Limerick city at the Belltable in February. They will embark on a nationwide tour of 10 venues including Dublin in October.

Talented Luka Bloom to perform at the Belltable this September