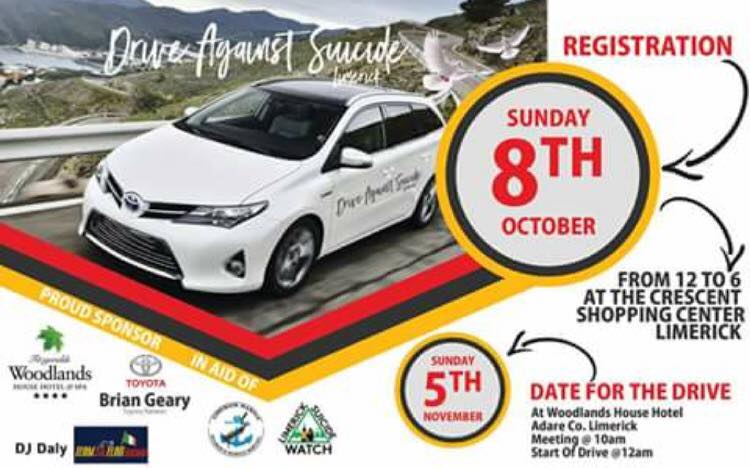 Registration for this year’s Drive Against Suicide Limerick will be taking place from 12-6pm this Sunday October 8 at the Crescent Shopping Centre.

Drive Against Suicide Limerick will be taking place on the 5th of November.
The cost of registration is €20 per car and there will be refreshments on the day.

Drive Against Suicide Limerick would like to thank their sponsors Brian Geary Toyota, DJ Daly Car Flag Ireland and Fitzgeralds Woodlands House Hotel, Adare for all their support.

All proceeds from Drive Against Suicide Limerick go towards Limerick Suicide Watch and Limerick Marine Search and Rescue Service.

The Limerick Marine Search and Rescue, last year, celebrated their 30th year running since establishing in 1986. The organisation has since grown to a full-blown headquarters at Atlas Avenue on the Dock Road housing state of the art equipment to help keep the people of Limerick safe in unpredictable waters. It also holds pontoons along the waters of Limerick equipped with boats which were established with the help of donations. As a result from these, Limerick Marine Search and Rescue are incredibly responsive in an emergency call due to their quick accessibility to the water.

Limerick Suicide Watch is a Limerick based suicide prevention group formed in 2016 that patrol between the four bridges in the Limerick City Area. The group’s main focus is to keep eyes on the river, identify and provide support to those in distress and may be contemplating suicide. The Limerick Suicide Watch patrols run on Mondays, Tuesdays and Thursdays from 9 pm until 1 am and Saturday from 12 until 4 am depending on the activity at that time. During the year, Limerick Suicide Watch is also out on patrol for other key times, for example, Leaving Certificate and Junior Certificate Results, Bank Holidays, Christmas, New Year Period and other main events during the year.

Make sure to come along get registered for Drive Against Suicide Limerick and support these worthy causes.

Shine Out of Darkness exhibition for Opening Doors Appeal