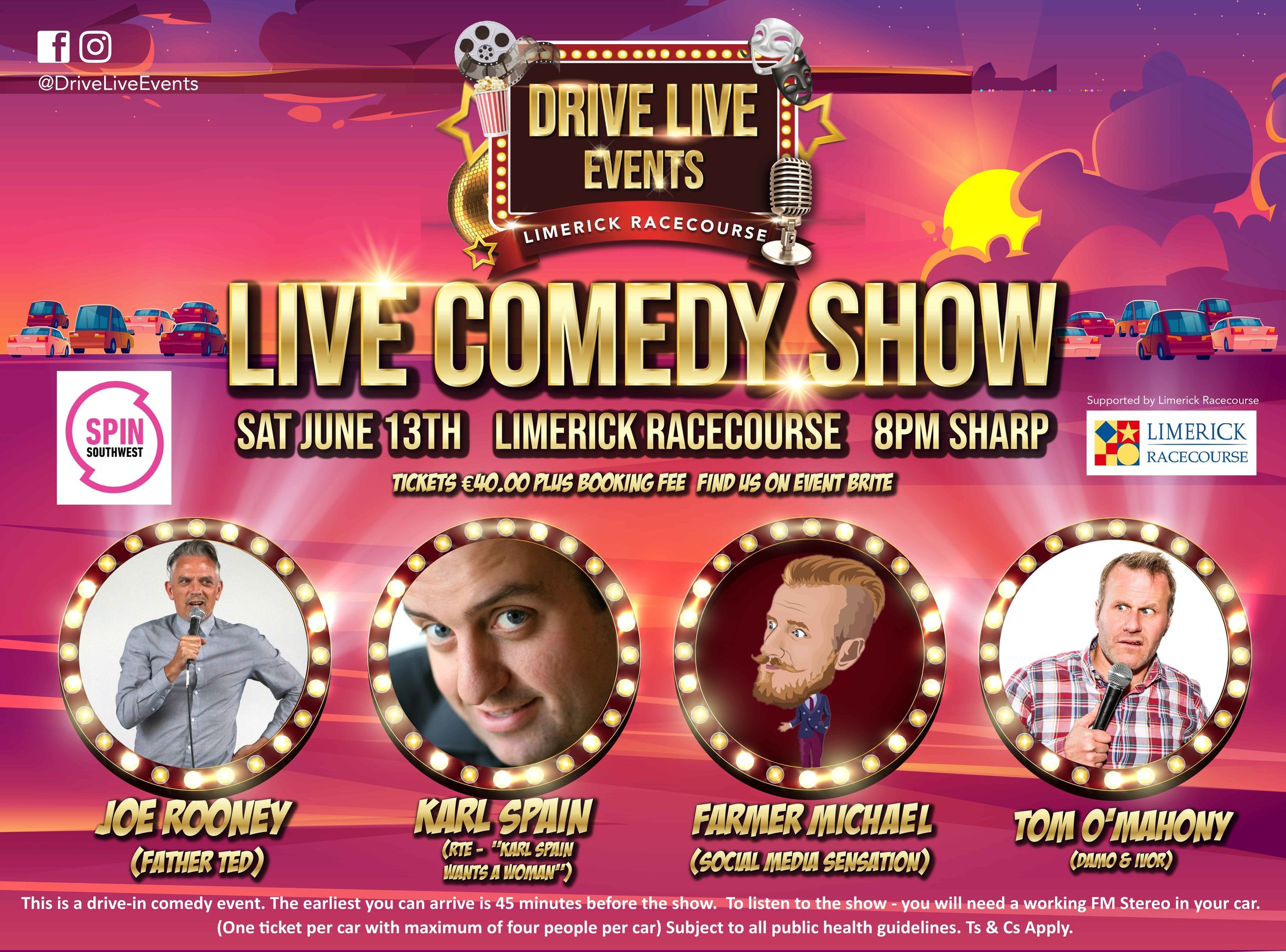 Drive Live Events comes to the Limerick Racecourse this June with films, comedy and music for families.

Also taking place are the screenings of some movie classics including ’Back to the Future’ and ’The Goonies’ with many more on the way. To kick it off at Limerick Racecourse first is the comedy show with Joe Rooney, Tom O Mahony, Karl Spain and Farmer Michael.

Joe Rooney is a successful actor and writer having acted as Father Damo in Father Ted and Timmy in the long-running RTE sitcom Killinaskully as well as a host of short and features films. He has been selling out stand up shows for years with his racy sense of humour.

Tom O Mahony came to attention as Tarquin the toff on Damo & Ivor, and later as oddball neighbour Paddy d’Pervert in Bridget & Eamon, as well as his unreal stand-up show. Limerick’s own, Karl Spain who has delighted comedy audiences for years with his razor-sharp wit and sense of mischief will be joining the comedians.

Line up for the Drive Live Event.

Social media sensation, Farmer Michael, Stevo has gathered a following of over 500,000 people worldwide and over 100 million views on some of his hilarious sketches.

The staff will allocate parking in front of the screen on a first-come, first-served basis, you will have a clear view of the screen from any location of the movie complex.

There will be designated parking areas for people with disability and visually impaired. Please notify ticket staff members at the entrance if you require any assistance parking near toilets, near an exit or if you need to leave the venue early.

For certain events, there may be age restrictions. In this case, you may be required to show some identification for age verification. Toilets and disabled toilet facilities, bins and first aid are provided to cause little disruption to event-goers.

The ticket is valid for one vehicle, driver and up to four passengers. Vans, large vans, camper vans, high roof vans, trucks, minibuses or coaches are not permitted and will be refused entry to any event.

You must have a functioning FM stereo in your vehicle. Details of FM frequencies will be advertised upon arrival to the event location and on the screen.

Drive Live creator Kevin Rowe said: “Our main business in events over the years has been working in venues and hotels across Ireland. With that on pause now we have decided to bring entertainment to people in a new and safe way. Family-friendly movies and some comedy hopefully will give people a much-needed laugh”.

More information on tickets and dates can be found on Drive Live Events social media channels and Eventbrite. All events are subject to government health policies.