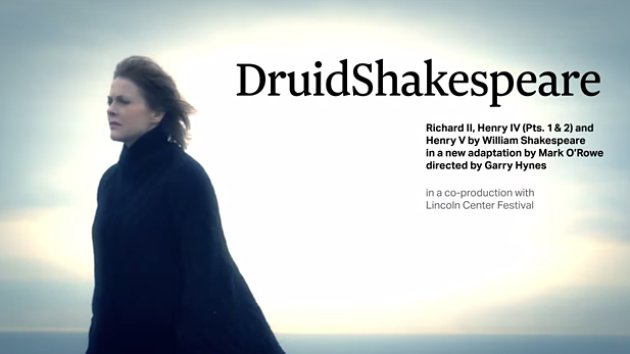 DruidShakespeare tour will be on national tour and performances of the play will take place this June in the Lime Tree Theatre from June 23 to June 27.

In a co-production with Lincoln Center Festival

An epic story of families, wars and the making of nations

DruidShakespeare is an exploration of English history through an Irish lens. As Shakespeare was writing  Richard II, Henry IV (Pts. 1 & 2), and Henry V English forces were being sent to Ireland to quell rebellions and these expeditions are referred to throughout the plays.  Adapted by one of Ireland’s most exciting writers, Mark O’Rowe, DruidShakespeare distills the narratives of these four works into a unified dramatic action. Shakespeare’s language has been preserved as has the chronology of the plays but O’Rowe’s adaptation removes ancillary characters and streamlines the narrative to harness the drama of these epic works. DruidShakespeare will be presented by a 13-strong cast, including members of the Druid Ensemble, the bedrock of the company.

Please note: The performance is 6 hours in length

The performance will run in its entirety on Friday and again on Saturday including two intervals and a lunch break.

Find out more about upcoming events and news from the Lime Tree Theatre here.