By Richard Lynch on November 17, 2020@richanthon 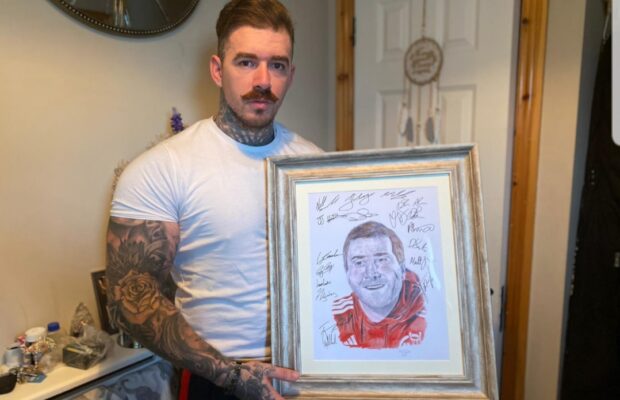 Eamonn Baggott has decided to take part in Movember this year to raise awareness for men’s physical and mental health.

Eamonn, an Irish fitness and fashion model based in Limerick has set up a donation page with Movember and will also be auctioning off a painting he did of the late Munster rugby coach Anthony ‘Axel’ Foley. The portrait has been signed by most of the Munster team and is framed. Forty two-year-old Anthony Foley passed away in Paris on Sunday, October 16, 2016 ahead of the province’s opening Champions Cup fixture against Racing 92.

Former St Munchin’s College star Anthony Foley played all 48 games in Shannon’s famous four-in-a-row of All-Ireland League title from 1995 to 1998. He also made 201 appearances for Munster and won 62 caps in the green of Ireland.

Eamonn, like many other people, has been affected by the loss of family members due to cancer or mental health and so has decided to work with Movember to raise funds and support for men’s physical and mental health.

Eamonn believes strongly in the cause saying, “Movember is an amazing charity for mental health and cancer in men. I have lost two uncles to cancer in the last few years and also friends to mental health problems so I want to honour their memories by raising money and awareness for this wonderful cause.”

Movember is a leading charity that is changing the face of men’s health. From a humble beginning, the Movember movement has grown into a truly global one. Movember has made epic progress in men’s health, they credit this to the five million people who have raised money with them since 2003.

Movember is carried out over the month of November. There are many ways you can take part in Movember. You can take part in growing a moustache without shaving at all for the whole month, this is a common way for men to raise money for Movember, and everyone has a lot of fun watching their progress while they try to grow out their beards.

We at I Love Limerick wish Eammon well on his fundraising journey!

If you would like to donate to Eammon’s Movember page, go HERE