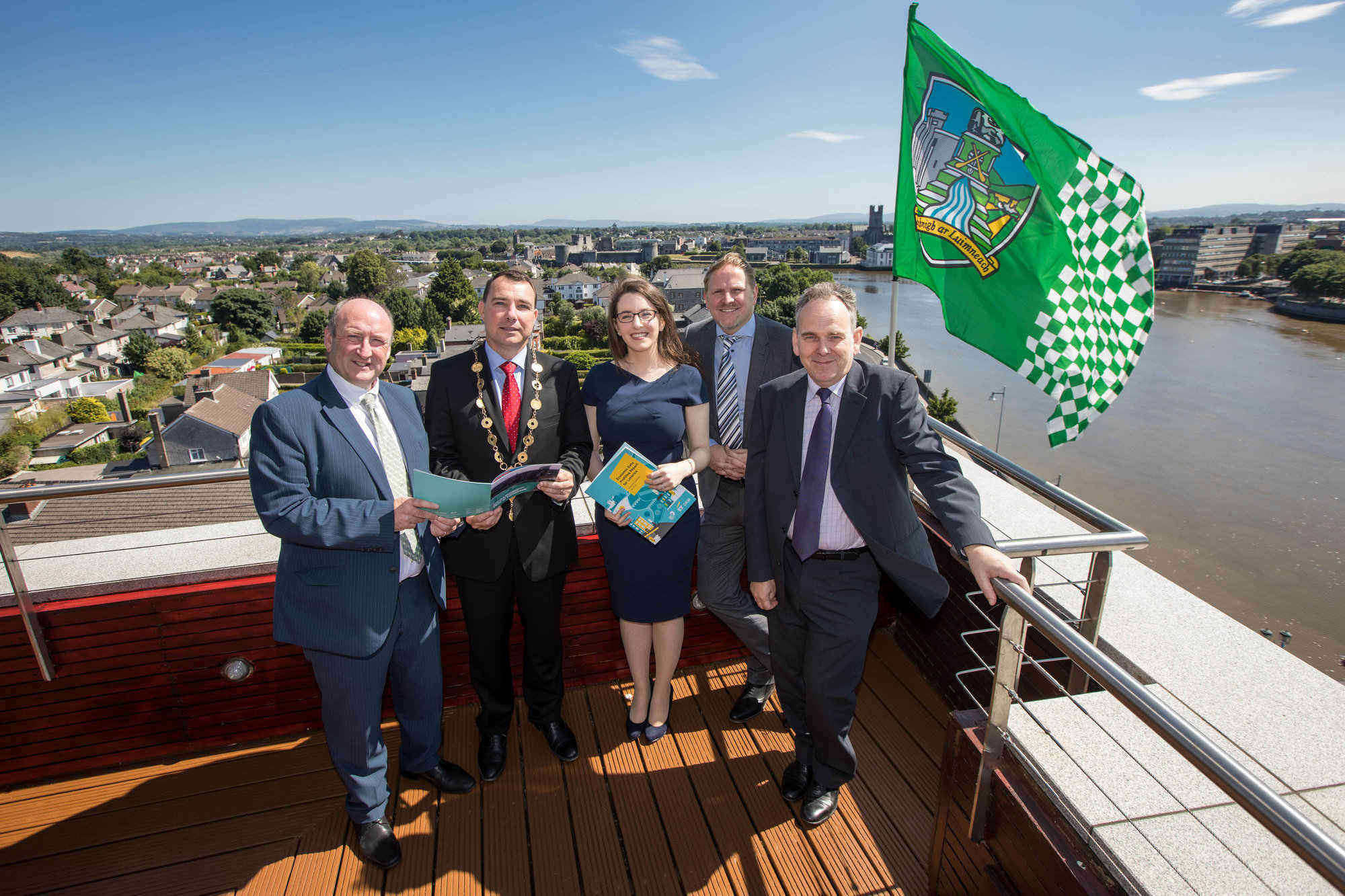 Limerick’s resurgence has been reaffirmed today with a major report from EY-DKM Economic Advisory, confirming its status as one of the nation’s fastest-growing economic hubs.

An Economic Data Profiling Report for Limerick commissioned by the Marketing and Communications Department of Limerick City and County Council has quantified Limerick’s dramatic resurgence, with 12,000 jobs created over the period from 2013-2017 and €2billion worth of projects submitted for planning permission since 2009 just among the key statistics.

According to the authors, the key opportunity for Limerick is to position itself as an attractive destination for FDI in light of Brexit. Conversely, the report also identified areas that need to be addressed if Limerick is to achieve its potential, such as hollowing out of the city center and tackling social issues particularly unemployment blackspots.

The report was commissioned in May of last year to determine a comprehensive Economic Profiling of the city and county and review its performance five years after the launch of Limerick 2030, a long-term economic and spatial strategy – the first of its kind developed by a local authority in Ireland – aimed at guiding the economic, social and physical renaissance of the city, county and wider region.

Launching the report today (Monday), Mayor of the City and County of Limerick, Cllr James Collins said: “Limerick is the urban success story of the recovery and this report confirms that while realising there continues to be ongoing challenges. The key barometer for any region is jobs and in Limerick, we have had 12,000 jobs created in less than five years with, 5,000 private sector jobs in the city and suburbs alone.

“That’s unprecedented growth for Limerick but the true definition of Limerick today is that we want to go again and this report is part of that process.  This is about taking stock of where we are, analysing what we need to focus on and moving forward with the ambition to be the best city in Ireland to work, live and play in.”

Ciara Morley, the Senior Consultant with EY-DKM Economic Advisory, said: “Today’s report is really showing us that the future for Limerick city and county is incredibly positive. Limerick City and County Council, and its stakeholders have taken major strides over the past number of years in tackling longstanding issues in the county. The labour market has shown strong signs of improvement and the revitalisation of the city center is well underway with the development of key projects under Limerick 2030.

The key opportunity now for Limerick is to position as an attractive destination for FDI in light of Brexit. Relative to the other Irish cities Limerick is already in a strong position with its competitive cost of living and doing business but there is no doubt that the supply of high-quality office space coming on-stream and the Council’s ability to address infrastructural issues such as transport and broadband connectivity will only act to enhance Limerick’s offering to international markets further.”

Chief Executive of Limerick City and County Council Conn Murray said: “We’ve made quantum leaps since we launched our economic and spatial strategy, achieving a level of success that few would have believed. We were coming from an extremely low base and a huge amount has gone into getting us to where we are. But we’re not going to be patting ourselves on the back as there’s a long way to go.

“The momentum we’ve built up is going to drive us forward and this report, while quantifying our success to date, is also about identifying the direction we need to take so that we can continue to grow the city, county, and region. Much of this is in our own hands but one of the standout strengths identified in this report is the level of collaboration between all stakeholders, from the government to regional partners, and that will be essential to bring Limerick to the next level.  There would be no point in this report either if we did not identify areas we need to continue to work on, particularly unemployment blackspots and tackle these issues if we are to move forward with the purpose Limerick needs.”

The report looked at Limerick’s performance over recent years and the current outlook, as well as delivering a forward-looking Predictive Analysis, a detailed assessment of investment in Limerick in key sectors, as well as benchmarking Limerick against comparable international cities, namely Dundee and Norwich (UK), Portland (U.S), Alborg (Denmark), Montpellier (France), Groningen (Netherlands) and Vancouver (Canada).

Among the key findings by EY-DKM Economic Advisory were that Limerick is the most affordable urban area in Ireland in which to both rent and buy residential property. Coupled with its disposable income being higher than the national average, this gives Limerick a distinct advantage. The relative affordability of office space in Limerick compared to other cities was cited, as was the level of collaboration, joined-up-thinking, and engagement in the city and wider community, plus the engagement between business, third-level and statutory bodies.

With regard to benchmarking, the report found that Limerick has a younger population age profile than the international benchmarks, which is viewed as a positive in that the city can have greater economic participation for longer into the future. The relative diversity of its sector employment is a strength for Limerick, mitigating risks of over-dependence on a single sector/company.

The EY-DKM Economic Advisory report found that while Limerick will not be immune from the threats from BREXIT, the city’s competitive cost of living and doing business, relative to other locations in Ireland, leave it well-placed to capture certain types of “back-office” type activities, both from the UK and further afield, and relocating from Dublin.  Industry collaborations such as ‘Limerick for IT’ and ‘Limerick for Engineering’ are examples of industry-led initiatives that are a “standout feature” compared to other cities.

Neil Gibson, Chief Economist, EY Ireland commented: “The EY Brexit Tracker has shown that 21 Financial Services companies based in the UK have decided to move Dublin since the Brexit Referendum. Ireland’s economic growth is projected to remain strong and Limerick should be well positioned to continue to grow and attract investment in what will be a very competitive environment. It is important that the stakeholders in the region continue to work together to make the most of the competitive advantages they have.”

The relative affordability of office space in Limerick compared to other cities in Ireland was identified as another strength. The report found an existing under-supply of high-quality office space but this will be presently addressed by the under-construction city center LEED Gold Gardens International development and the Opera Site – the largest single development undertaken outside the capital and which will go to planning in the autumn.

Other strengths identified include the city’s positive social/lifestyle factors, a supportive business environment, its central location and strong connectivity through Shannon Airport, its historic infrastructure, tourist attractions, and sport.

It also notes Limerick’s growth through “positive disruption” in having taken some bold decisions in response to the major loss of jobs during the economic crisis. Other areas highlighted as positives are its network of secondary schools; 23,300 third level students across UL, LIT and Mary Immaculate College; its road connectivity, with Limerick set to become the only city outside the capital to have direct motorway links to two other cities – Galway and Cork; the proximity of an international airport, Shannon Airport, just 20 minutes away; and its marine connectivity with Limerick served by two ports, Limerick Docks and Foynes Port.

The report from EY-DKM Economic Advisory also identifies areas that need to be addressed, including revitalising the city centre core, though this is being tackled presently with the completion of the state-of-the-art Gardens International and Opera sites as well as the Docklands Strategy for redeveloping non-core port authority assets just off the city centre and the €9m upgrade of O’Connell Street.

It cites the number of areas of social deprivation, and unemployment blackspots, that exist relative to the other main cities in Ireland, though the proportion of the total population living in these areas is falling steadily. While city broadband coverage is strong, rural broadband challenges exist and the city is seen as an underperformer in tourism terms, though its current hotel occupancy rate of 75% is much improved from the city’s occupancy rate of 61% recorded in 2014.

Regarding unemployment, across Ireland’s five cities of Dublin, Cork, Limerick, Galway, and Waterford, the greatest improvement in the unemployment level was actually observed in Limerick with a 6.5 percentage point decline in the rate between Census 2011 and Census 2016.