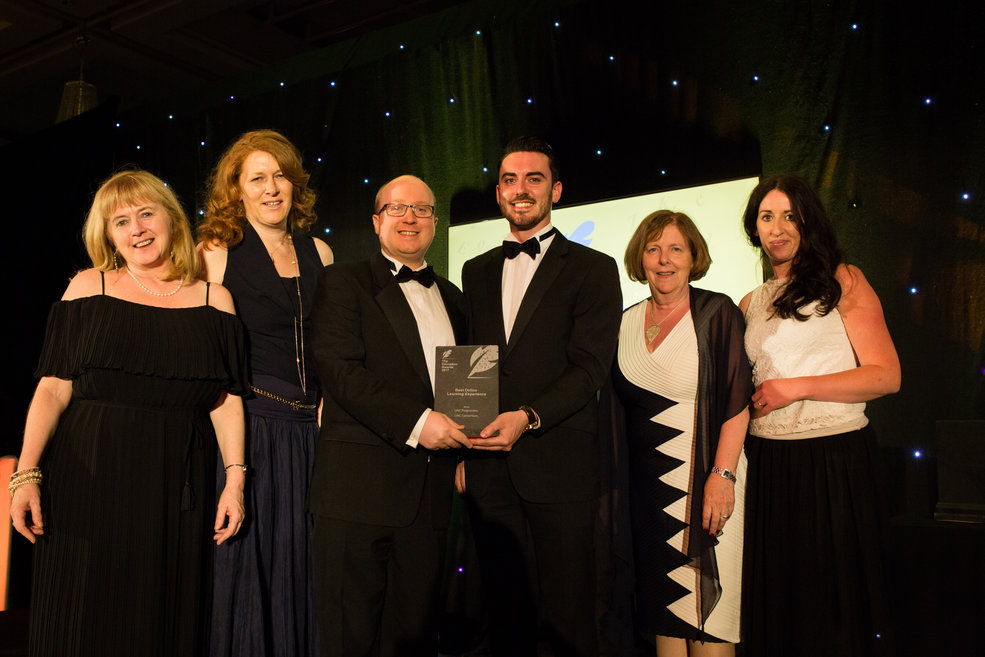 Double Win for MIC at the Education Awards 2017

Double Win for MIC at the Education Awards 2017

It was a double win for Mary Immaculate College MIC as they picked up two coveted prizes at the Education Awards 2017. MIC was named the winner of the International College Achievement Award and was part of the winning consortium that won Best Online Learning Experience for its Leadership in Inclusion in the Early Years (LINC) Programme at the ceremony held at the Ballsbridge Hotel, Dublin.

The Education Awards 2017 recognises, encourages and celebrates excellence in the third level education sector on the island of Ireland from both State and privately funded institutions. The award categories at the Education Awards 2017 are designed to highlight the key areas that impact upon student performance and provide opportunities for educational institutions, their employees and contributors to have their achievements recognised across the various important facets of their operations.

In accepting the award Fintan said “I am delighted to have accepted the Best Online Learning Experience Award for the LINC Programme which recognises the positive effects of the collaboration between all three members of the consortium. It is a testament to the work of the full team – from our programme designers to our tutors and support staff who have brought a wide range of academic, instructional design, ICT, and student support expertise to the programme.”

He went on to say that the award further acknowledges the transformative power of blended learning to impact on children, families and early years education through fostering an inclusive culture and developing inclusive practices in early years services across Ireland.

Dr Emer Ring, Head of Department of Reflective Pedagogy and Early Childhood Studies, at MIC acknowledged that “this award further affirms the commitment to the focus on ‘quality’ that propels all early childhood care and education programmes at MIC and highlights the benefits of the College’s goal to develop research partnerships and share expertise with colleagues both nationally and internationally.”

A sentiment echoed by Professor Marie Mc Loughlin, Head of the Froebel Department of Primary and Early Childhood Education, Maynooth University who added that “the award acknowledges the huge contribution the consortium has made to enhancing the quality of early childhood education in Ireland. It also demonstrates the benefits of drawing together combined knowledge and expertise of a number of organisations, each deeply committed to contributing to the betterment of care and education for children in the early years.”

Teresa Heeney, CEO of Early Childhood Ireland stated: “We are very proud to be part of the consortium delivering the LINC programme and to have our work recognised by this award.  The real stars, however, are the early childhood professionals participating in LINC and bringing that learning back to their early years’ settings all over the country.  This has created a very positive ripple effect across the sector, to the benefit of the children and families at the centre of everything we do and in line with our vision that every young child is thriving and learning in quality early childhood settings.  LINC is off to a good start and awards like this really help to reinforce its value and spur everyone on to extend its reach and impact.”

The LINC programme is part of a government commitment to the provision of high-quality education and training in the field of early childhood care and education and was introduced as part of the Access and Inclusion Model (AIM) in 2016. While over 80% of the programme is delivered online, the classroom based sessions are offered in nine regional centres in order to ensure access to practitioners across the country. The centres for 2017/18 are Cork; Dublin North; Dublin South/West; Galway; Kildare; Kilkenny; Limerick; Meath; and Sligo.

Ms Holly Cowman, Director of the International Office, said; “We are absolutely delighted with this award. MIC has a vibrant international community, collaborating with more than 50 partner universities and colleges in Europe, North America and Australia, and hosts over 70 international students annually. These students all make a profound contribution to our community, not just academically but also culturally, enriching the fabric of student life at MIC.

She continued “The International Office is delighted to accept this award on behalf of the entire MIC community. We have professional services staff, faculty and a students’ union that are unmatched in terms of the warm welcome and ongoing pastoral care that international students receive here while being fully integrated into all aspects of College life. A high-quality education, built on a long tradition of commitment to excellence, comes as part of a package that includes a friendly, safe, English-speaking environment, which really nurtures students coming here from all over the world.”

MIC was also shortlisted on the night in the Best Student Experience Category.