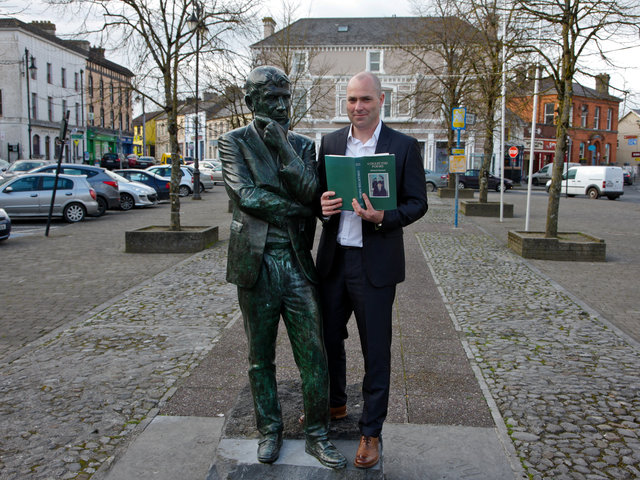 Hundreds of literary enthusiasts from all over Ireland will descend on the town to attend the three-day event in the very streets which shaped Hartnett’s poetry.

This year’s festival, which is an initiative of Limerick Arts Office and supported by The Arts Council, once again offers a mix of poetry and music, literature and drama, visual arts and dance.

Speaking at the launch Éigse Michael Hartnett 2016 in Newcastle West, on Monday, April 4, 2016, author Donal Ryan said he is “honoured” to be part of an event that celebrates the life and work of “Munster’s poet laureate”.

“Newcastle West is my second home and for me it is a place where poetry forms part of every exchange. Nowhere in the world is language used quite the way it is in West Limerick,” said Mr. Ryan.

He added, “Remembering and celebrating, and, for some, discovering, Michael Hartnett, this writer who lived in language, who whispered and spoke and shouted and sang with two tongues and one beautiful heart, is something everyone should share in. Michael Hartnett’s poetry springs from the soil and stone and soul of West Limerick, it’s Camas and Templeglantine and Maiden Street. His legacy is giant, but casts no shadow; our world is a brighter and better place for his having been in it.”

“This year’s festival will be an exciting and eclectic mix of voices and music, and the members of the organising committee have, as always, put their hearts and souls into it. I hope that everyone who can turns out to share in this celebration of the life and work of Munster’s poet laureate,” said Mr. Ryan.

“Éigse is special because it is a very intimate and warm festival where you can meet people who knew Hartnett and his colourful and complex nature and for whom his poems, and his doings, are part of their lives,” commented Sheila Deegan, Limerick Arts Officer and Arts & Culture Officer, Limerick 2020.

“It is not every day you get to see verses of poetry in shop windows, which is part of the pleasure of walking around Newcastle West during Eigse. Paul Durcan once made the point that few towns erect a statue to a poet. Newcastle West has done that and that says a lot about the esteem in which Michael Hartnett is held in his native West Limerick”, she added.

Éigse Michael Hartnett will be officially opened on Thursday, April 14, at 8pm by the Mayor of Limerick City and County Council, Cllr Liam Galvin, and will feature a keynote address by Rita Ann Higgins on “Wasp in a Mug, or why is it some poems unsettle us.”

The free event also will feature the presentation of the Michael Hartnett Poetry Award 2016, which is this year being shared by John McAuliffe from Listowel, County Kerry for his collection ‘The Way In’ and to Doireann Ní Ghríofa from Kilnamona, Co Clare, for her collection ‘Clasp’.

Gerard Smyth, Poetry Editor of The Irish Times, was, along with Rita Ann Higgins, one of the judges of this year’s Michael Hartnett Poetry Award and he will deliver the citations to this year’s joint winners. The Limerick Arts Office and The Arts Council jointly fund the €4,000 annual prize to honour the poetic legacy of the late Michael Hartnett.

Friday offers a chance to see some innovative dance films along with some integrated dance performances, choreographed by Mary Hartney, inspired by a Michael Hartnett poem. There will also be a chance, over morning coffee, to hear local award-winning author Mike Mac Domhnaill read from his short story collection, ‘Sifting’. Poet and artist Jo Slade will open an exhibition of paintings by students at Scoil Mhuire agus Ide, Newcastle West, which have been inspired by Hartnett poems.

Friday also will see a Story Exchange, where students will have the experience of stepping into another’s shoes through the telling of their stories. Éigse teamed up with Narrative 4 to bring this to Newcastle West as part of Narrative 4’s mission to develop empathy and leadership in young people through the powerful medium of storytelling. Narrative 4 is an international foundation, co-founded by writer Colum McCann and other writers and artists.  Poet Michael Coady will team up with emerging poet Jane Clarke on Friday night for readings.

On Saturday, award-winning novelist and short story writer Donal Ryan will deliver this year’s Michael Hartnett Memorial Lecture. His talk, called “Saving Words” will look at language and how we use it and also how we have subverted the English language imposed on us and elevated it to an art.  Saturday afternoon’s walkabout will be led by Des Healy, a close friend of Hartnett from the time they went to school together. It will take people to the places important to Hartnett and will be a mix of anecdote, poetry and song.

The Poetry Slam is an important element of Éigse Michael Hartnett 2016 and starts as always with a Hartnett ballad. The prize money for an original poem is €300 while there is also a €100 prize for best recited Hartnett poem.

The big headline act of Éigse Michael Hartnett 2016 is the reading by internationally acclaimed and award winning author Colum McCann on Saturday night. He will be joined on stage by singer/musician Colm Mac Con Iomaire. Throughout the weekend meanwhile, an exhibition of photographs inspired by Hartnett’s Inchicore Haikus will take place in Newcastle West Library.