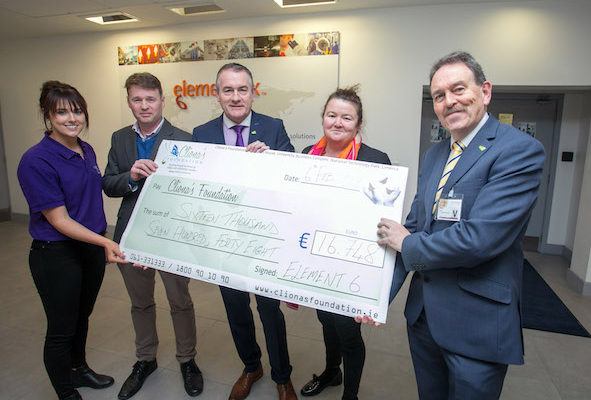 Leading global synthetic diamond manufacturer Element Six and its employees in its plant in Shannon Free Zone have put an early 2018 gloss on the finances of deserving Mid-West based Cliona’s Foundation after presenting the popular charity with the proceeds of last year’s entire fund-raising endeavours.

Three separate Element Six Clionas Foundation fundraising events – a charity cycle, cake sale and Christmas lunch –  and a weekly ‘bake’, all run by employees in 2017, raised over €8,000 but a matching contribution by the company has now brought the total amount going to the charity to €16,748.

Element Six Clionas Foundation fundraising was chosen as the staff’s 2017 designated charity because of the support it provides to the parents of children with a life-limiting condition but in particular the support it gave to the parents of three-year-old Fionn Barry, who has spent most of his young life in hospital being treated for Infantile Spasms – a debilitating and life-limiting illness that requires 24hour care. Fionn’s father Trevor Barry works as part of the maintenance at Element Six.

Trevor said that the generosity of colleagues and the company had touched him and his family deeply.  “You often hear it said that people are great but we can certainly vouch for that.  We’ve got incredible support for Fionn, who would not be with us were we not in a position to provide 24hour care, and I am so touched, in particular, by what my colleagues at Element Six have done and, indeed, what the company has done. Cliona’s Foundation helped us out at a time when we were struggling and we know that these monies will be hugely appreciated by the other families it will enable them support.

Said Brendan Ring, co-founder with his wife Terry of Cliona’s Foundation, “This is a really generous donation and will make a huge difference. We know from our own experience with Cliona the huge additional costs that caring for a sick child can bring and we met many families who were really struggling with these costs and other bills. This should not be the case but the sad reality is, there are many families in financial crisis while trying to care for their sick child.  Our support alleviates some of that pressure for a period of time and we know it really does make a difference financially and psychologically. The staff and company have given a great example of just what can be achieved by social clubs if they put a charity programme in place. I would encourage as many companies as possible to do this, regardless of what charity the money goes to.”

Said Grainne Loonam, Element Six staff charity committee leader, “Last year was the first year that we actually put in place a designated charity programme and we are delighted with the outcome.  A year goes by so quickly and while there was a good bit of effort and time put into running our events when you get to present a cheque like we have now to Cliona’s Foundation, it makes it all worthwhile.

“We had great inspiration by way of the fight that young Fionn is putting on and we had the support of the company fully behind us by way of affording us time to organising events and then matching our overall donation. On top of it all, we had great fun doing the events.  Everyone played a part in what’s been a really positive experience for us.”

Funds from Cliona’s Foundation are used to pay for the ‘hidden costs’, including accommodation, food, petrol, car parking, specialist equipment, additional home care  and other miscellaneous expenses incurred by families who have a child with a life-limiting illness , The Foundation was set up by Brendan and Terry Ring following the death of their daughter, Cliona, from an inoperable brain tumour in 2006 when she was just 16 years old.

Cliona’s Foundation has provided support to 500 families across 29 Counties over the past 11 years.