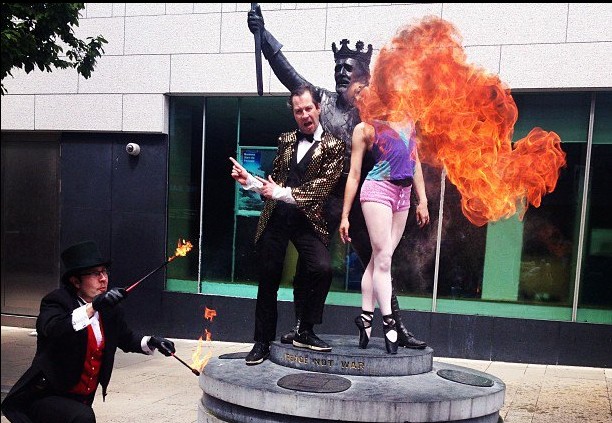 The ceremony, which was held at the IFEA’s 61st Annual Convention in Tucson, Arizona, U.S.A. saw the International Festivals and Events Association (IFEA) pay tribute to the Limerick Elemental Arts and Culture Festival and all the Limerick team that made the event possible.

The event, in which Awards were handed out in 68 different categories in total was host to International contenders such as Destination NSW in Sydney, Australia; Ludwig Van Beethoven Easter Festival in Krakow, Poland and Festival Lent, Maribor, Slovenia. elemental festival wins Pinnacle award.

“We would like to congratulate all of our Pinnacle winners for their outstanding entries into this year’s competition,” said Steven Wood Schmader, IFEA President and CEO.

“The IFEA/Haas and Wilkerson Pinnacle Awards Competition recognizes the outstanding accomplishments and top quality creative, promotional, operational and community outreach programs and materials produced by festivals and events around the world. Striving for the highest degree of excellence in festival and event promotions and operations in every budget level and every corner of the globe, this competition has not only raised the standards and quality of the festivals and events industry to new levels, but also shows how event producers can use innovation and creativity to achieve a higher level of success.” continues Steven.

Alan Hogan, of Elemental Arts and Culture Festival Limerick said, “It is great to see the work which has gone into the festival and the brochure being recognized on such a significant, international scale. For a festival, there is no higher recognition. Created with David Curtin of Brainstorm Design and illustrator Jacob Stack, the 2015 brochure has an augmented feature. To celebrate the win, the good people at Augment.com have very kindly activated the app once more, until October 9th, so people who still have the brochure can download the app and have some fun with it.”
Headquartered in Boise, Idaho, the International Festivals & Events Association (IFEA) is the Premiere Association Supporting and Enabling Festival & Event Professionals Worldwide. In partnership with global affiliates under the umbrellas of IFEA Africa, IFEA Asia, IFEA Australia, IFEA Europe, IFEA Latin America, IFEA Middle East (MENASA), and IFEA North America, the organization’s common vision is for “A Globally United Industry that Touches Lives in a Positive Way through Celebration.”