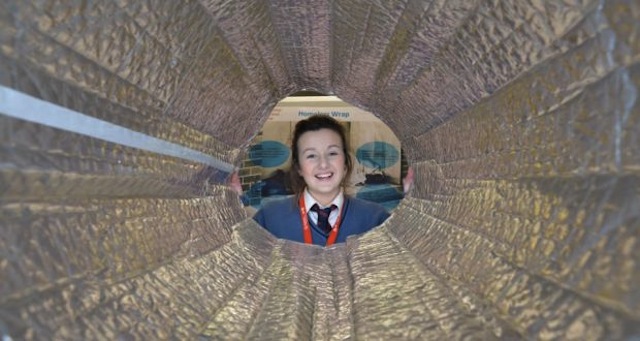 Emily Duffy pictured at the BT Young Scientist competition in 2015

Desmond College sixth year student Emily Duffy has been shortlisted in the final 20 for the 2017 Pramerica Spirit of Community Awards for her invention of a sleeping bag to protect the homeless.

The nomination for the only all-Ireland youth initiative came about because of her dedication to service in her community. Emily was moved by the high levels of homelessness in her community so she began volunteering with Mendicity, a charity that employs homeless men and helps enable them to start a new life.

Emily entered the BT Young Scientist competition in 2015 with this incredible invention, however, having been noticed by numerous companies Emily’s invention is being put to good use on the streets of Dublin. Emily’s original idea was to devise a sleeping bag that would be waterproof, fireproof, very well insulated, lightweight and cheap to manufacture. Her initial aim was to come up with a practical response to an aspect of homelessness and Emily also wants the bag to be used in emergency or disaster zones around the world and in Ireland.

Working closely with the service users, Emily Duffy ensured that her invention met their needs and requirements. The sleeping bag is made out of metallic fireproof bubble wrap which provides a waterproof layer for people sleeping on rain-soaked streets. Reflective strips would improve visibility, and Velcro fastenings meant the user could enter and exit the bag easily.

Pramerica Spirit of Community Awards rewards post-primary students for outstanding acts of volunteerism and the positive contribution they make in their local communities and further afield. At the gala held in Crowne Plaza Hotel in Dublin, two of the 20 students will be named All-Ireland Youth Volunteers of the Year, receiving €1,000, a gold medallion, a crystal trophy for their school and an all-expenses paid trip to the United States in May to participate in the Prudential Spirit of Community Awards.