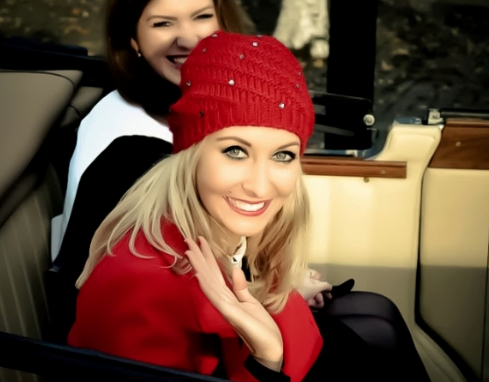 Emma O’Driscoll is a television and radio presenter for RTE. Emma rose to fame in 2001-2002 when she auditioned for Irish Popstars competition and landed a spot in the pop band Six which had huge success nationally. Emma is also an accomplished children’s book author.

Emma Louise O’Driscoll was born in Limerick on March 23 in 1982. Raised in Limerick with her two sisters Julie and Georgina and her brother Stephen. From a young age Emma always displayed a keen interest in song and dance and showed great talent. Emma attended Presentation Secondary School in Limerick, whilst there she was part of the Dominican Choir and Bunratty Castle Singers, she learned dance at Shape Dancing School and was a member of Limerick Dance Troupe High Voltage. Emma received a Blue Peter Badge and also won hip hop and freestyle championship titles in Ireland and Europe.

Six became a hugely popular band, their first performance was at the Cheerio’s ChildLine Concert at the Point Theatre Dublin. Their first single A Whole Lot of Loving is still to this day the fastest selling Irish single in history. During their time the band released two multi-platinum selling singles and a top 5 album. Six also had a no.1 single in Norway and New Zealand. The band also toured with Westlife in the UK performing sixty six shows in total and also two national tours of Ireland.

Soon after Six ended Emma took part in RTE’s Charity 252, a reality tv show which saw her and six other celebs run a radio and tv show for 14 hours a day. The cameras watched their every move and the reality series was broadcast on RTE 2. The show was hugely successful and raised €40,000 for charity in the process. Following her success on the show Emma began co-hosting Limerick’s Live 95FM breakfast show and hosted her own show Emma’s Saturday Night Party. Emma landed her first presenting role on RTE’s The Den presenting the Disney Club. Over her career Emma has presented many children’s programmes including Den Tots, Hubble and The Buzz.

Using her dance and singing experience Emma has been choreographing, singing, writing and presenting on RTE Jr’s brand new fitness show for kids Move It, the show carries over to RTE Radio Jr where Emma presents a show every Saturday and Sunday morning. Continuing to use her singing and dancing talent Emma performed as herself in a Snow White pantomime at University Concert Hall Limerick, and has been a member of the Limerick Panto society for over six year appearing in many other pantomimes.

Emma has made numerous other television appearances, in 2009 she participated on RTE’s Celebrity Bainisteoir, her Limerick team made it to the semifinals. In 2010 she appeared as a guest judge on the All Ireland Talent Show alongside John Creedon for the South auditions. She has made appearances on shows such as The Afternoon Show and Two Tube.

Emma completed her final grade in Speech and Drama with The Irish Board of Speech and Drama and is a certified practitioner of Neuro Linguistic Programming. A children’s author, Emma published her first book The Misadventures of Max for the Baby Max Wings of Love Fund.