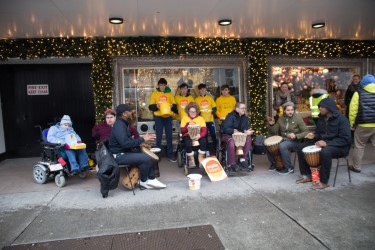 On Thursday 15 December, the Enable Ireland annual Christmas caroling fundraiser took place on the streets of Limerick City. With a day of drumming followed by caroling supported by employees of Dell, taking place outside Brown Thomas, they created a festive atmosphere amongst the city centre, all the while collecting funds for a very worthwhile cause.

Enable Ireland provides services to over 5,000 children and adults with physical, sensory and intellectual disabilities in 14 counties across Ireland. They work to enable and empower people to achieve independence, choice and inclusion within their community.

Located in Mungret, this particular Enable Ireland team are an adult day service centre, which offers a non-residential, five-day week service. Ann Enright, the local community fundraiser for Limerick, spoke about what the day entailed; “I was offered by Dell to do a carol singing for us, and they wanted to do it in Limerick city. I got a permit for that. When the permit came through they gave me the permit for four hours instead of two, so David Idioh the drummer jumped in with his crew and they came from  12 until 2, and then Dell took over from 2 until 4. It was great to get it all done in the one day, it was really lovely.”

Dell, situated closely to Enable Ireland, has joined together with them in the past couple of years at Christmas time to do a caroling fundraising in the city. Although last year it was a washout due to the storms, Mary Foley, an employee at Dell, spoke of the success of this year’s fundraising “I think the day is going well, this year so far has been really good. Even though the weather has been miserable it’s still nice to get out and do it. There’s still a lot of people around town which is great, there’s a great buzz in the city. ”

Mary also spoke of the other work Dell do in partnership with Enable Ireland, saying “we also run a league between Enable Ireland and Dell. It’s called the Boccia League. Boccia is one of the sports that is played within the Special Olympics, and some of the guys would be on the team. It’s good, we get to be on mixed teams with them and we have a big league that runs for about a month in the lead up to Christmas.”

Here you can find out more about Enable Ireland.

You can read more about charities in Limerick here.