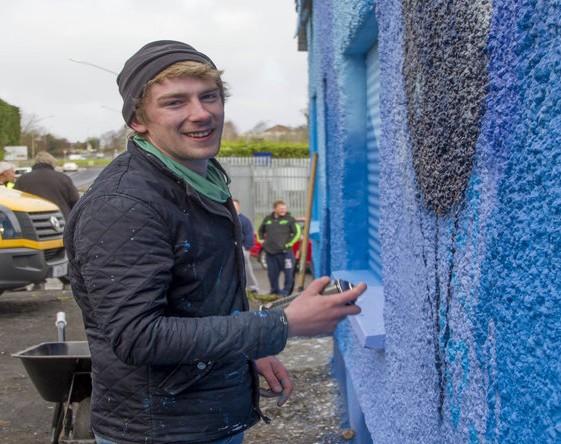 Eoin Barry is the recipient of the 2013 and 2014 Limerick Printmakers Bursary Award. This is an accolade given to an outstanding graduate of LSAD’s ‘Printmaking and Contemporary Practice’ degree program, each year. The award has become an integral part of Limerick Printmakers remit and one that reinforces Limerick Printmakers core ethos of both promoting printmaking as an art form, and supporting emerging artists working within the discipline. Barry is a printmaker concerned with social and societal issues who lives and works in Limerick. Following his BA, Barry completed a Masters program in Social Practice and the Creative Environment in LSAD, in 2014. As part of this course, Barry created and enacted ‘The Uisce Campaign’, a project that saw a print of a drain cover sent to 250 unsuspecting recipients across the globe via the postal network. 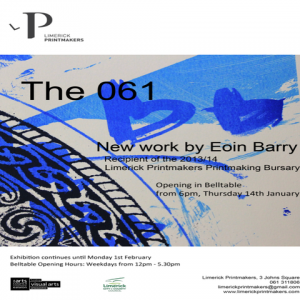 Other projects by Barry include, ‘Cathair Grá’ which involved repurposing 45 electrical boxes as canvases for Limerick based artists working in the community. Barry’s practices informed and informs the workshops he undertakes with local schools and organisations, an example being ‘How much does this bag really cost?’. This workshop was held in a west Limerick school, posing the above question to students in order to explore issues surrounding ethical, sustainable labour and the industry of large-scale, textile manufacturing.

The content of the work involves local indigenous ESB boxes resurrected from the graveyard of a local electrical station. Using Irish words forged from iron combined with an area code, that he discovered in the phonebook, the work came to life.

This body of work was created by Limerick, for Limerick, in Limerick. The text and objects you see are derived from the city, or as Barry terms it, ‘The 061’.

Limerick has a long history of alternative names, from historic titles to the more recently designated kind. Now through various visual practices. such as Barry’s works, Limerick has a new title, a numerical sequence ‘The 061’. This method has been used widely by various figures in popular culture.

Tag along to The Eoin Barry Printmakers Exhibition to learn more interesting facts and information about Barry’s work and the inspiration behind it all.
Check out Limerick Printmakers here or here
Have a look at all the work done by Limerick City Council here
Read about other similar upcoming events in Limerick here