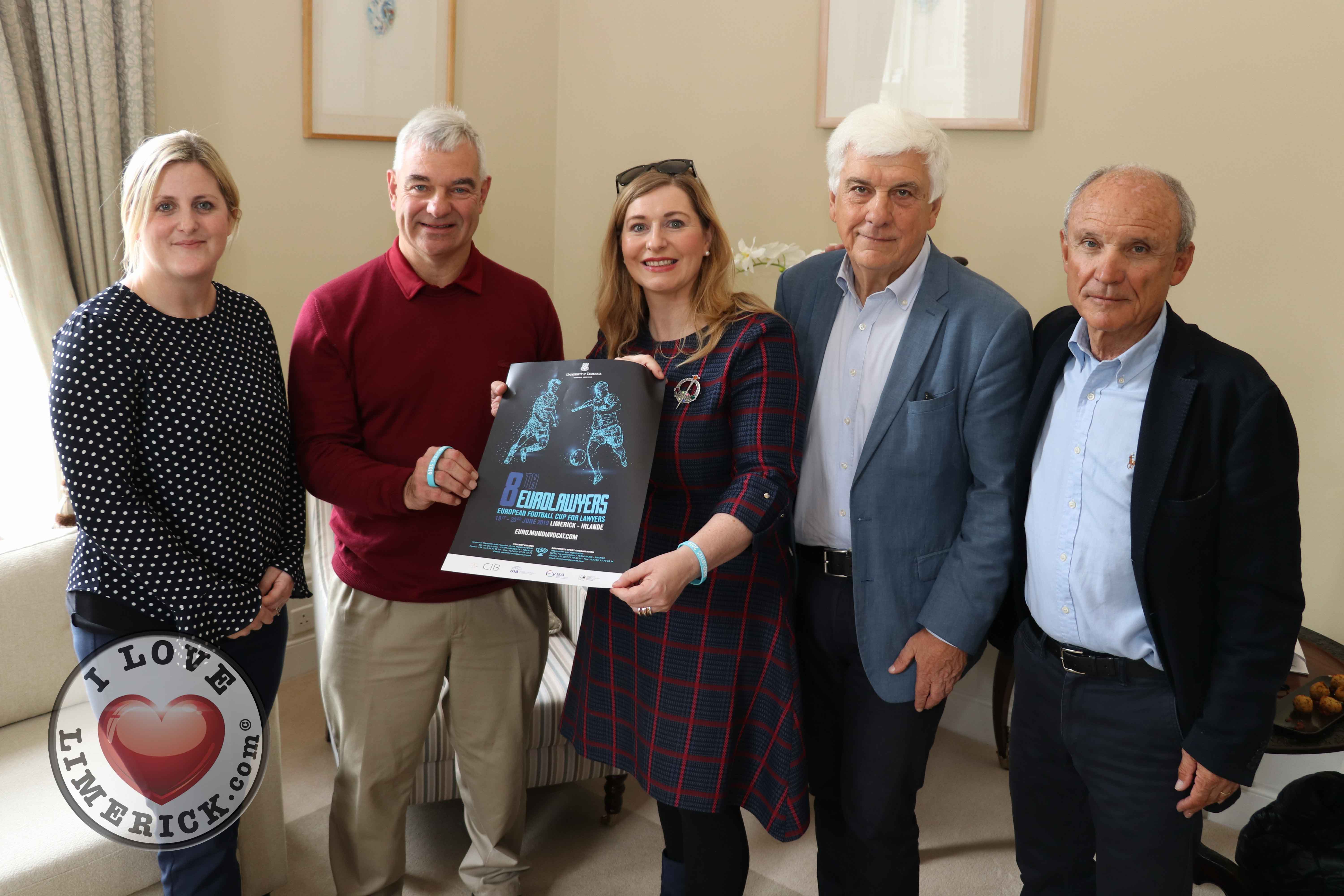 Limerick will play host to the 8th Eurolawyers Football Cup 2019 from June 18 – 23, 2019. The venue will be the University of Limerick Conference and Sports Campus and the event aims to bring 45 teams from 20 different countries for the five day festival of football. With approximately 800 sports visitors expected to be in attendance, this event is hugely significant for the sports tourism of Europe with an estimated economic impact of up to half a million euro for the Limerick region.

The University of Limerick was able to secure this sporting event following a bidding process, successfully competing against bids from Lisbon, Copenhagen and Cambrils/Salou. The organising company, Corporate Sport Organisation (CSO) Paris, previously brought events to Limerick including the World Medical Games in 1995 and the Mundiavocat Football World Cup for Lawyers in 1996.

Adrien Delaunay, of CSO Paris said, “The Eurolawyers is a football tournament dedicated to teams composed exclusively of lawyers from European countries, which takes place every two years. Its origins came from the Mundiavocat, the World Football Cup for Lawyers, created in 1983 by the French lawyer Vincent Pinatel and Pièrre Lusinchi. With a strong development since their creation, the continental tournaments appeared from 2005 with the Eurolawyers, followed closely by the AsiaLawyers, the AmericaLawyers and the tournament ‘Avocats Francophones’. The previous edition of the Eurolawyers took place in Maribor (Slovenia). It brought together 40 teams from 20 different countries, from Spain to Russia or Italy, Romania and Hungary.”

The Eurolawyers event will take place on the world-class sports facilities at the University of Limerick and will utilise the University’s new McGuire pitch development. All teams will be accommodated on-campus which will provide an Olympic/World Cup-style atmosphere, with many supporters and families of the teams expected to stay in the key sporting destination of Limerick city.

David Ward, Sports Business Development Manager of the University of Limerick Conference and Sports Campus comments, “We are delighted to continue our long-standing relationship with the corporate sports organisation as the eight edition of Eurolawyers will utilise our accommodation, sport and catering facilities. It is a wonderful event to promote Limerick and the region to our international guests.

Karen Brosnahan, of Conference and Sports Bureau, added, “This event is a testament to the fantastic relationships between CSO and Limerick spanning 2 decades.  In 1995 and 2015 UL hosted World Health & Medical Games and no better legacy of success but to have another CSO event in 2019.”

It is expected that the visitors for the event will benefit the region while residing in UL as they utilise Limerick’s unique position as a gateway to the Wild Atlantic Way with potential for extending their stay. Shannon Airport can expect football as a main hub through its connectivity to main Europe and London.

Letitia Wade, Business Tourism Officer at Fáilte Ireland comments, “Business and Sports Tourism continues to be one of the most lucrative forms of tourism, with visitors travelling to Ireland for business purposes spending almost three times more than the average visitor. One of our core priorities at Fáilte Ireland is to significantly grow the regional spread of these types of events so that every part of Ireland benefits, and that’s why we provide support and funding for convention bureaux across the country, including Shannon Region Conference and Sports Bureau.” Letitia continues, “We were very pleased to collaborate again with Shannon Region Conference and Sports Bureau and the University of Limerick to invite CSO back to the region for the spectacular EuroLawyers European Football Cup event. Not only will this event be worth almost €500,000 to the local region, but it also important in terms of leaving a lasting legacy for Limerick as a top place in which to host a sports or business event.”

The event is open to the following age groups: Classic, Masters (35+) and 5-aside, and each squad is limited to 26 people. Contact [email protected] for more information.

For more information on the Shannon Conference and Sports Bureau, click here