European City of the Future Award goes to Limerick City 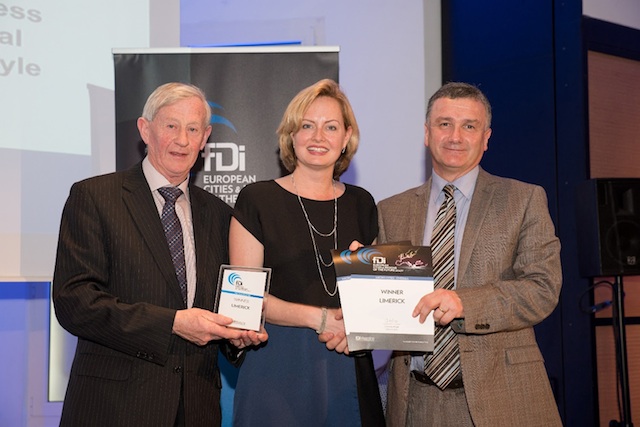 Limerick City and County Council representatives gathered with officials from almost 100 European cities and regions for the prestigious FDI European Cities & Regions of the Future awards ceremony in Cannes, France this week.

The event celebrated the success of cities and regions, including Limerick City, that feature in FDI Magazine’s European Cities & Regions of the Future 2016/17 ranking.

In existence for more than a decade, FDI Magazine’s biennial league tables of the most attractive locations in Europe for future inward investment have become a key benchmark of FDI competitiveness across the region. They serve as a barometer of attractiveness for the many cities and regions, from Ireland to Russia and from Finland down to Greece, that are proactively pitching themselves for inward investment.

Limerick City was last month announced as ‘European City of the Future’ in its population category as well as a list of the Top 10 Northern European Cities, which also features London, Copenhagen, Helsinki, Dublin and Stockholm.

Limerick City, which was nominated by Limerick City and County Council, also has been named runner-up in its population category for ‘Business Friendliness’, ‘Economic Potential’ and ‘FDI Strategy’.

Speaking at the awards ceremony, Cllr. Noel Gleeson, Chair of the Council’s Economic Development, Enterprise and Planning SPC said, “Limerick City’s strong performance in this award scheme sends a clear message to potential investors that business opportunities are being opened up in Limerick and the public has renewed confidence in the economic future of their city and county.”

“Existing multinationals and large national companies are expanding and increasing their workforces and Limerick is becoming increasingly noted as an attractive destination for inward investment from global, tech, and other companies. Our growing international reputation will help consolidate this progress,” said Cllr. Gleeson.

Pat Daly, Director of Services, Economic Development & Planning Department, said, “I want to commend the staff of Limerick City and County Council, including Innovate Limerick, the Local Enterprise Office (LEO), for their commitment and central role in establishing Limerick as an attractive investment location for businesses from inside and outside of Ireland.”

“The Council is committed to working with IDA Ireland and Enterprise Ireland in securing new investment by businesses from inside and outside of Ireland. To capitalise on the progress made to date, Limerick is investing over €1billion in enterprise and investment infrastructure and targeting the delivery of 12,000 as part of the Limerick 2030 Vision: An Economic and Spatial Plan for Limerick,” added Mr. Fitzgerald.

Courtney Fingar, editor ­in ­chief of FDI Magazine, commented: “With continuing challenges being faced by Europe, from the economic to the political, it is more important than ever for Europe’s cities and regions to take a proactive stance towards FDI promotion and to fight for their share of investment flows. Our rankings are designed to recognise the locations that have the right fundamentals in place to attract foreign direct investment. We applaud all of those whose names appear in our league tables, and congratulate the many city and regional officials who joined me on stage to accept awards on behalf of their jurisdictions.”