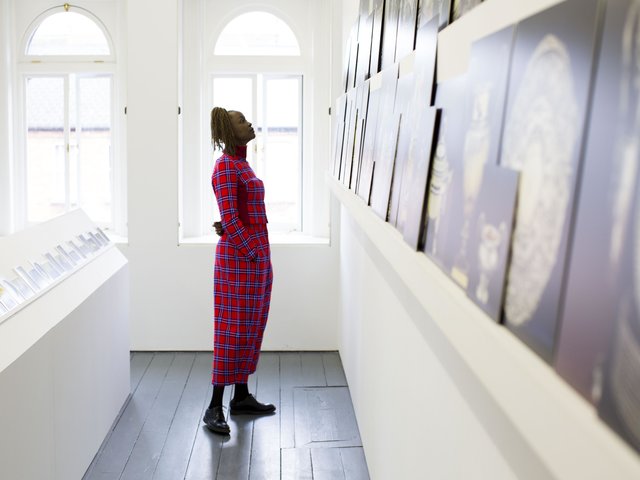 EVA International 2016 Still the Barbarians Open to the public

EVA International 2016, Ireland’s biennial of contemporary art Still the Barbarians, curated by Koyo Kouoh, is open to the public from April 16, to July 17.

Still the Barbarians will take place across six locations: Limerick City Gallery of Art, Cleeve’s Condensed Milk Factory, The Sailor’s Home, King John’s Castle, The Hunt Museum and Mother Macs. Within the context of the 1916 Easter Rising centenary, Still (the) Barbarians investigates the post-colonial condition of Ireland as a point of departure from where artistic reflections, critical redefinitions and political transformations are articulated.

Hugh Murray commented on the curatorial concept for EVA International Chair, “responding to the 1916 Easter Rising centenary in Ireland, Still the Barbarians, Koyo Kouoh’s theme for EVA International 2016, offers a compelling reflection on the history and legacy of our colonial past. Taking its title from Constantine Cavafy’s 1898 poem, ‘Waiting for the Barbarians’, Koyo has commissioned many new works and presentations. Artworks have travelled to Limerick from around the globe, bringing together 57 artists who were selected from over 2,000 proposals from 106 countries. The opportunities that this creates for intercultural dialogue is immensely important in this profoundly sad time of involuntary civilian dislocation and migration on a massive international scale. The exceptional artists and artworks chosen for Still (the) Barbarians allow us the privilege of sharing their insights into the diversity and the fundamental shared humanity of our different cultures, heritage, and histories.”

Curator Koyo Kouoh reflects on her decision to curate Still the Barbarians: “The opportunity to work with EVA International offered a means to investigate and engage with an important discourse surrounding post-colonial effects, and how they continue to shape our present condition. When I looked at the line-up of previous EVA curators, I felt very privileged to be part of it.”

Koyo Kouoh comments on the selection of artists in relation to the curatorial concept: “Still the Barbarians invites us to look at the postcolonial condition on a comparative level. It is not just given from an Irish perspective but also from an African perspective, a Southeast Asian perspective, and a South American perspective. The whole discourse on the post colony should be more present in societies that were once colonized or were once colonizers – in Ireland, a country that has been occupied for so long, as well as elsewhere. The whole selection of artists is an attempt to show that the local is in the global and that the global has an influence on the local, and how these contemporary issues are a matter of interdependency, since it is a question of how you see yourself from whatever standpoint or whatever location you are acting from, of how you connect that to the world. Nowadays, even the most remote or isolated places are connected to the rest of the world because of the flurry and flood of information we have access to.“

An Activation programme will provide opportunities for discourse and dialogue in response to the exhibition, and Young EVA,  with education curator Katy Fitzpatrick and philosopher Aislinn O’Donnell,  will facilitate a series of workshops between children, young people and participating artists.

The Still the Barbarians programme will conclude with a Colloquium and The Poets’ Recital co-curated by Koyo Kouoh and Rasha Salti, supported by the Johann Jacobs Museum and in partnership with Limerick 2020.

Koyo Kouoh is the founding artistic director of RAW Material Company, a centre for art, knowledge and society in Dakar and the curator of “FORUM”, the education programme at 1:54 Contemporary African Art Fair in London and New York.

Koyo maintains a critical curatorial, advisory and judging activity internationally. In collaboration with Rasha Salti, Kouoh is working on “Saving Bruce Lee: African and Arab Cinema in the Era of Soviet Cultural Diplomacy”, a three-year research, exhibition and publication project to be held at Garage Museum of Contemporary Art in Moscow in June and September 2016. Koyo Kouoh lives and works in Dakar and Basel, and was recently highlighted as number 73 in the Art Review Power 100 list.