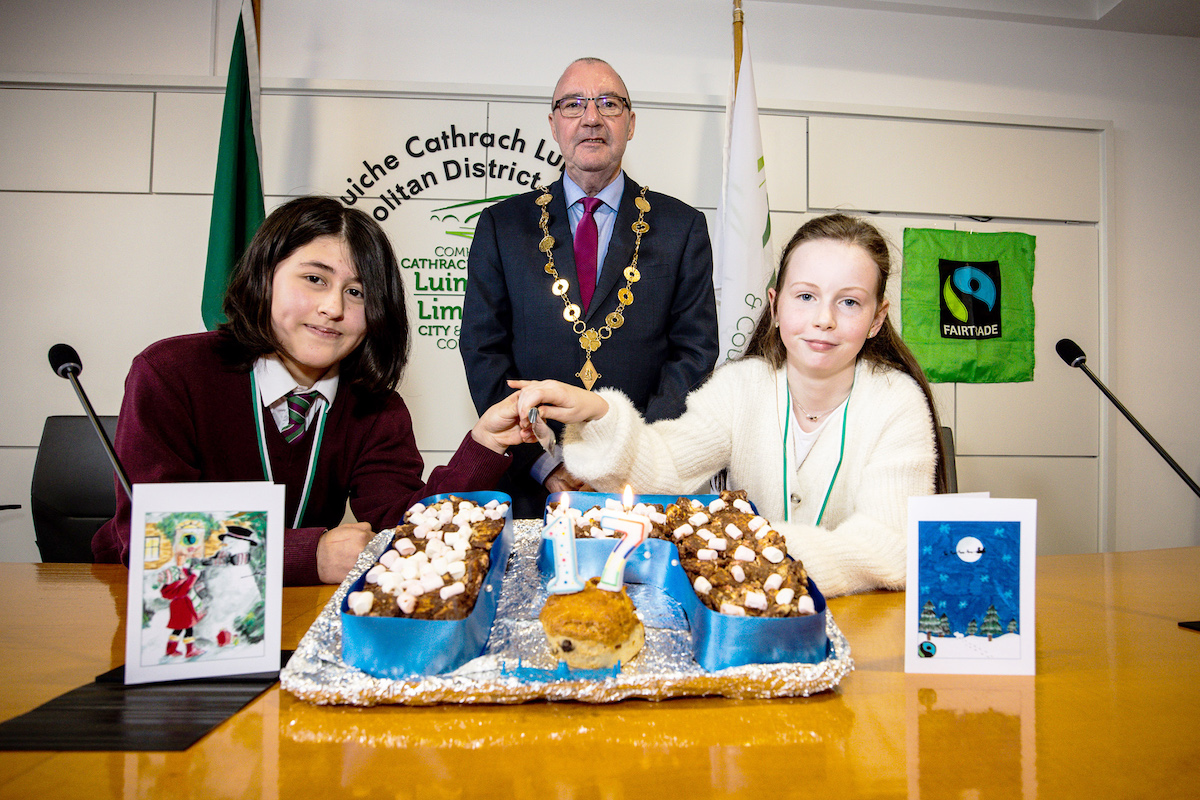 As part of the awareness programme, the students created Christmas Cards centred on the Fairtrade message of promoting fair trading practices between Ireland and developing countries

Students from schools across Limerick have been told that climate change is making the work of the Fairtrade organisation more important than ever.

As part of the awareness programme, the students created Christmas Cards centred on the Fairtrade message of promoting fair trading practices between Ireland and developing countries.

Cards were created by pupils of all ages, ranging from five up to 18 and involved schools across the city and county, illustrating what Fairtrade means to them.

Addressing the pupils from schools across Limerick, Mayor of Limerick City and County Cllr Franis Foley said “Choosing Fairtrade means that you care how the product was produced, who produced it and what benefit they get.”

“It means taking a look behind the brands, the messages and get to the real story behind the product. That is what Fairtrade is about! There are over 1.7 million producers, farmers and workers spread across more than 75 countries in the world participating in Fairtrade with sales in 2017 reaching 9.2 billion US Dollars.”

Announcing the winners of this year’s school’s Christmas Card, Fairtrade Limerick said the challenges being faced by farmers in Ireland are mirrored by farmers in the developing world.

Dolores O’Meara, Chair of the Limerick City Fairtrade Committee said: “‘People across the globe are finding life tough in 2022.  We are all concerned about rising prices, the uncertainty of energy supplies and the impact of climate change.  These issues have a far greater impact on those living in the developing world where they have little or no governmental supports.  One way in which we improve their situation is to support them through Fairtrade.  We can put products with the Fairtrade logo such as Fairtrade tea, coffee, cocoa, chocolate, bananas, biscuits into our shopping baskets and provide Fairtrade farmers/producers with a living income to help them survive these global challenges.’

The gathering in City Hall also marked the 17th anniversary of Limerick City as a Fairtrade City.

Limerick City was awarded status as a Fairtrade City in 2005 thanks to the concerted efforts of local people to ensure that Fairtrade produce was made widely available.

The Fairtrade programme ensures that producers in developing countries receive a fair price for their products.  A minimum price for negotiations between producer and purchaser is set in order to ensure the producers are guaranteed a sustainable business. However, if the market price is higher than this minimum price set, then the purchaser must pay the market price.