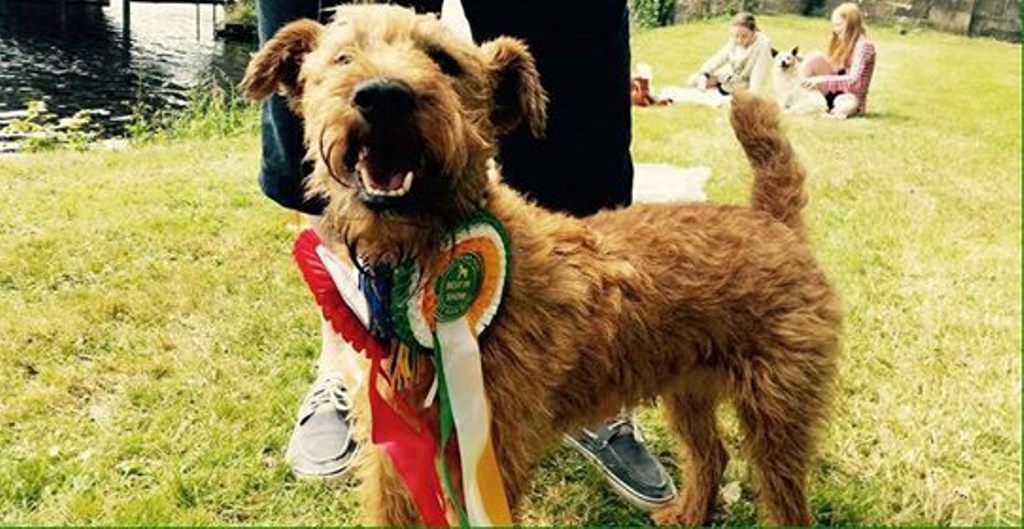 “Banner” who proudly won Best in Show at the 2015 Strut your Mutt Dog Show as part of Féile Brian Ború, which raised €495 for Limerick Animal Welfare.

The sun shone down (for the most part) in the beautiful twin-towns of Killaloe & Ballina as they celebrated the 22nd Annual Feile Brian Boru 2015.

Libbi, Zara and William Black, who took part in “Return of the Warriors” Street Pageant and won the Best Traditional Costume prize. The Black family were visiting Killaloe & Ballina from Cork for the weekend to celebrate Féile Brian Ború 2015.

Locals and visitors to the area were treated to a large array of events from 1st to 5th July, including The Furey’s Live in Concert in the Lakeside Hotel; A stunning Fireworks display over the River Shannon by Rocket Pyrotechnics; Traditional Craft Experience with CELT; Traditional Street Games; Animal Magic with their amazing display of animals; Strut your Mutt Dog Show in aid of Limerick Animal Welfare; Historical Guided Tours on Lake and Land, including St. Flannan’s Cathedral & on board the Spirit of Killaloe; Street theatre with the Armagh Rhymers who travelled all the way from Armagh, bringing with the some of the Dalcassian soldiers who were returning from Brian Ború’s funeral in Armagh; Live Music with The Mowgli Mob, DFN & Deco; Trad Session, Comedy Night with Irish Comedian Patrick McDonnell; The BBC – The Ború Busking Competition; Children’s Art; Art Exhibitions & Displays; Table Quiz;

The Féile Brian Ború committee would like to thank most sincerely all those who helped make this event possible.

They would like to thank in particular all the sponsors of Féile Brian Ború 2015.

“We recongise that we are currently in a challenging environment and we would like to thank all those, who in spite of this, continue to support our local festival! It is with your support that we continue to run Féile Brian Ború each year and continue to commemorate Ireland’s Greatest High King in his native place!”

The committee would like to thank all the volunteers who helped make this event possible and thanks also to all those who took part in this year’s events.

They would like to congratulate the winners of all our competitions –

The Under 8’s Hurling Tournament.