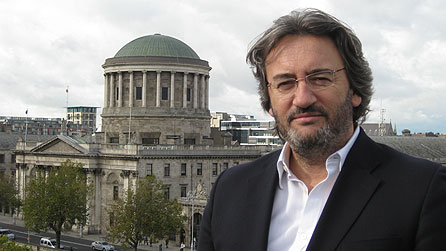 It was announced on Monday 12 January that international award winning foreign correspondent and author Fergal Keane (OBE) has been confirmed as guest speaker for the 2015 Limerick Mayor’s Ball.

Fergal Keane began his career in journalism in 1979 as a reporter for the Limerick Leader and Chronicle before moving to the Irish Press. He then went to work with BBC in 1989 as Northern Ireland Correspondent. From there he was appointed Southern African correspondent after covering the region during the early 1980’s. In 1995 he was appointed Asia correspondent based in Hong Kong and two years later, he returned to be based in the BBC’s World Affairs Unit in London.

He was named overall winner of the Amnesty International Press Awards in 1993 and won an Amnesty television prize in 1994 for his investigation of the Rwandan genocide, Journey Into Darkness. In 1996 Fergal Keane was awarded an OBE for services to journalism. He is the nephew of Irish playwright, novelist and essayist John B Keane.

The special correspondent for BBC News will attend the charity event recognised as the key civic and social event on the city’s calendar on Friday, 17th April. It is expected to raise thousands of euro for local charities.

The three charities to benefit from this year’s Mayor’s Ball include Cystic Fibrosis Ireland, The Aisling Return to Ireland Project and Pieta House.

Mayor of Limerick City and County, Cllr Kevin Sheahan, said he is delighted to support three very worthwhile causes and is looking forward to an entertaining evening with Fergal Keane.

“I’ve admired Fergal Keane as a journalist for many years throughout his impressive career which started with the Limerick Leader and Chronicle more than 30 years ago and I’ve watched his rise to become one of the BBC’s most recognised names and faces,” he said. “I’m delighted that he is returning to Limerick where it all began and I’m hopeful that the event will be well supported by the public as we seek to raise some much needed funds for three charities that are very close to my heart.”

CF Ireland (CFI) is a voluntary organisation that was set up by parents in 1963 to improve the treatment and facilities for people with Cystic Fibrosis in Ireland. CFI also co-operates with medical professionals to give maximum assistance to both parents and children/adults with Cystic Fibrosis and is supported by fundraising and voluntary contributions.

Pieta House is a centre for the prevention of self-harm or suicide and dealt with nearly 4000 people last year with numbers continuing to rise all the time. 90% of its income comes from fundraising events.

The Aisling Return to Ireland Project provides supported holidays in Ireland for long-term emigrants, fulfilling what is for many a dream of seeing their homeland again. It reaches out to Irish people who are vulnerable, isolated and alone by helping long-term emigrants reconnect with their families and friends and resettle in Ireland.

Individual tickets and tables of ten are now available for the Mayor’s Ball at €120/€1200 per table.
Those wishing to request tickets should contact [email protected] or 061-407347