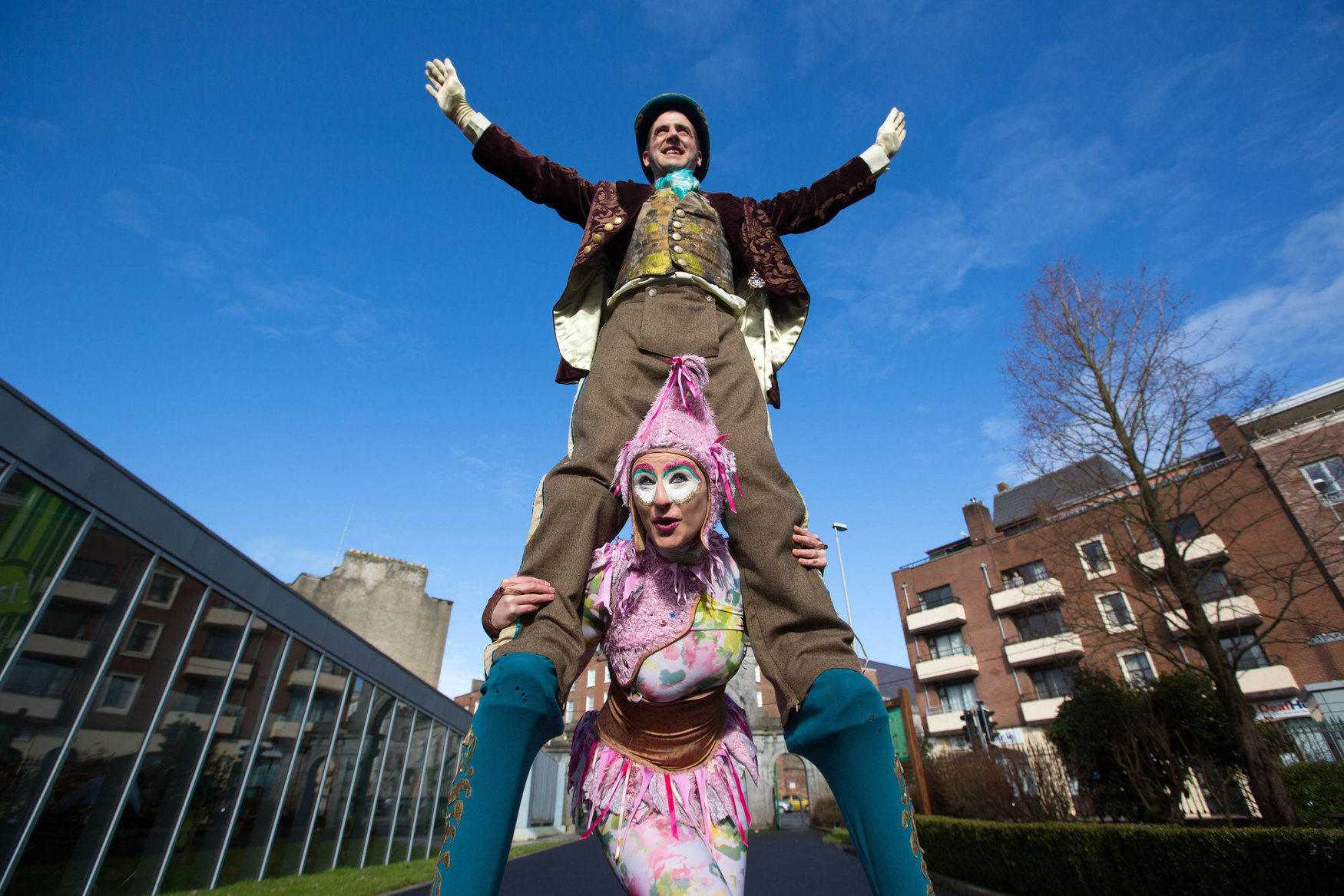 Up to 70,000 spectators are expected to line the streets of Limerick city centre to watch the annual St Patrick’s parade as local, national and international participants create a carnival of colour, celebration and craic.

Aerial dance and contemporary circus specialists Fidget Feet have now based themselves in Limerick, and have been chosen to lead this year’s parade due to the huge contribution they have made to the Limerick City of Culture programme 2014.

Founded in 2004 by choreographer Chantal McCormick (Donegal) and musician Jym Daly (Cork), Fidget Feet work with an outstanding production team to create work that is both original and fresh.

Expect an exciting opening to the parade as applications roll in from community groups, bands, dance troupes and charity groups who are all keen to participate in this year’s theme ‘Spring’ and creatively and colourfully celebrate St Patrick’s day together.

The event organisers are also working with professional street artists and community arts facilitators to enhance the overall day’s entertainment. Aiming to maximise the entertainment factor for the crowd, the parade will be shorter this year, providing the highest quality and variety of participants.

Parade entries will be limited with priority given to community groups, those participating in the theme, and walking entries.

A special award – the Martin Folan award will be presented this year to the best creative entry. This award honours the work and legacy of the Limerick based artist and teacher Martin Folan.

Judges this year include Lucy Medlycott from the Irish Street Arts, Circus and Spectacle network (ISACS) who commented:
“Limerick is the place where I was first launched into the world of street theatre, all thanks to Martin Folan, who was an absolutely incredible artist and teacher. He inspired so many people, and whom I will forever attribute my love of street arts to.”

HIGHLIGHTS OF THE 2015 LIMERICK ST PATRICK’S FESTIVAL INCLUDE:
A community youth choir ‘Young Singers’ from Ontario, Canada who strive to enrich lives through choral music, combining the joy of singing with the art of performing

This year’s Flag Ambassadors are the students from Coláiste Nano Nagle, The Presentation Secondary School who will carry Irelandʼs largest tricolour.

The 45th Limerick International Band Championship will take place on Sunday, March 15th at 12 noon when bands from all over Ireland, USA and Europe will compete to be crowned Overall Parade Champion. The Band Championship will start in Pery Square and end in Arthur’s Quay with a free concert for the public. Further details will be announced closer to the event.

The Greening of Limerick: A number of Limerick’s most prominent buildings are set to go green especially for the occasion. Already confirmed include Limerick City Hall, King John’s Castle, The Clarion Hotel, Barrington’s Hospital and Bellisimo Hair Salon.

St. Patrick’s Day 2015 at the Hunt Museum: The Hunt Museum will be celebrating all things Irish with free themed events on Tuesday 17th March 2015 from noon-5pm. Free admission to everyone wearing green.

“The theme for this year’s parade, Spring, is open to interpretation and exploration and I’m looking forward to a wonderful colourful event. Our National City of Culture designation left Limerick with a tremendous legacy and with our exciting grand Marshals and European Capital of Culture 2020 bid currently being prepared, I believe events like our St. Patrick’s Festival showcases one of Limerick’s greatest attributes, our cultural and creative community.

He continued: “We are encouraging all participants to perform and entertain as they proudly parade through the main streets of Limerick. Whether it is showing off football or judo skills, dance or skateboard moves we really urge groups to come up with exciting ways of demonstrating what they do to the anticipating crowd. It is your chance to shine, celebrate and have fun!”

The Festival is looking for enthusiastic, reliable and motivated people to be stewards for both of the events. As a steward, you will perform a vital role as the public face of the festival, ensuring that audiences have a positive, enjoyable and safe experience.

The 2015 Limerick St Patrick’s Festival is run on behalf of Limerick City and County Council by Grooveyard Productions. Fidget Feet

Application forms for this year’s event can be found on their site here. The closing date for entries is Monday, 2nd March 2015.