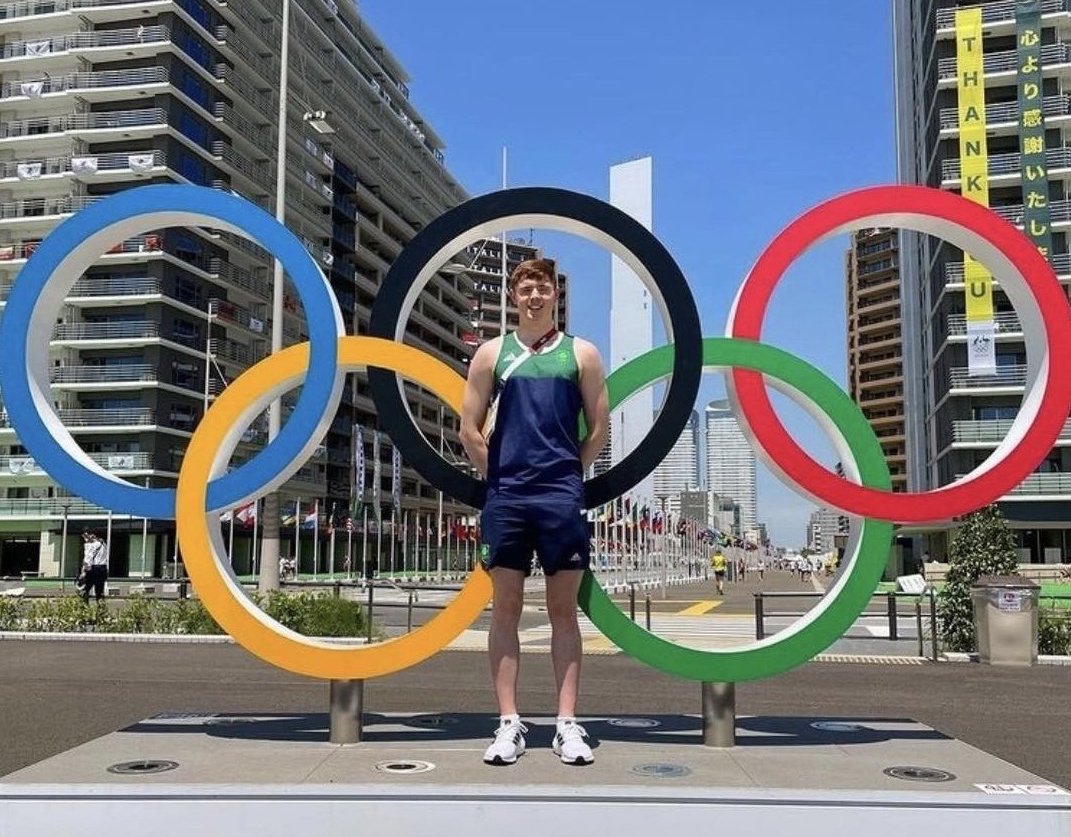 Finn McGeever is an Olympic swimmer and UL student.

Finn made history at the Tokyo Olympic Games this summer, as a member of Ireland’s first-ever 4x200m freestyle relay quartet.

Finn McGeever is a 20-year-old competitive swimmer and second-year student of Physics and Maths at the University of Limerick. Finn made history at the Tokyo Olympic Games this summer, as a member of Ireland’s first-ever 4x200m freestyle relay quartet. The new Olympian, who hails from Tipperary, has trained in Limerick from a young age and is eager to get back to the UL lecture halls and Sports Arena after his recent victory.

When did swimming become a part of your life?

I grew up beside Lough Derg so swimming has always been a part of my life. I used to spend every summer jumping into the lake with my brothers and my friends off the various piers. My dad also used to take me to the local Lakeside Leisure Centre to swim in the pool most evenings each week. These were the foundations that made me start swimming lessons when I was six years old, and competitive swimming when I was nine with coach John Dempsey.

Has competitive swimming always been your main aspiration/interest?

When I was younger I was interested in soccer, but once I started competing in competitions such as the Community Games and the Irish Minor Schools, I realised that swimming was the sport for me. I was also starting to make some lifelong friends in my training squad too.

You study Maths and Physics at UL, but did you have any connection with Limerick before you started your degree?

I live in Ballina in Tipperary, however, I have trained in the UL Sports Arena for all of my swimming career! Therefore, I was very familiar with the university campus before I started my studies there.

Was being an Olympian always on the cards for you?

Not in 2021 anyway! My goal was that if I was ever going to make the Olympics, it was going to be in 2024. I always thought that even making the Olympics was unlikely as I wasn’t as strong a swimmer in my youth. It goes to show that you don’t have to be a good junior athlete to be a good senior athlete.

They finished the 4x200m Freestyle Relay in 15th place.

We're proud to have you on our team Finnhttps://t.co/3TLzveMogR#Olympics #Tokyo2020 pic.twitter.com/HQ0VK6NGYN

For obvious reasons, training for the Tokyo Olympics was unique to training for any other Olympic games. How did you deal with the changes and the uncertainty?

The postponing of the games worked in my favour as I developed massively as an athlete in that year. The lockdowns proved useful for training, as there were no nights out to tempt us away from our training routine.

Amazingly, 13 athletes from the UL community, from students to staff and graduates, took part in the Tokyo Olympics. Was there a sense that ye were representing the university as well as Ireland?

Absolutely. The ‘UL Sport’ social media were very good at constantly sharing news about us, so from keeping up with that news, I was able to know who to look out for around the village.

How long did you spend in the Olympic Village/ Tokyo?

I spent one week in a holding camp, then two weeks in the Olympic Village.

Now that the Olympics is over, will your main focus be coming back to Limerick and getting your degree?

Yes. The next Olympics is three years away and I have two years left in my degree. The goal is to focus on my studies while continuing to improve in my sport over the next two years. Then I will have a whole year to focus solely on swimming.

All I can say is hopefully. After seeing how my community responded to me competing in Tokyo, I have more incentive than ever to do whatever I can to make it to Paris 2024.

What is your favourite thing about being an athlete in UL/Limerick?

The best part about being an athlete in Limerick is living on the UL campus with all of my training group. We go to training together, we eat together and we go out together. It makes for a really well-bonded squad.