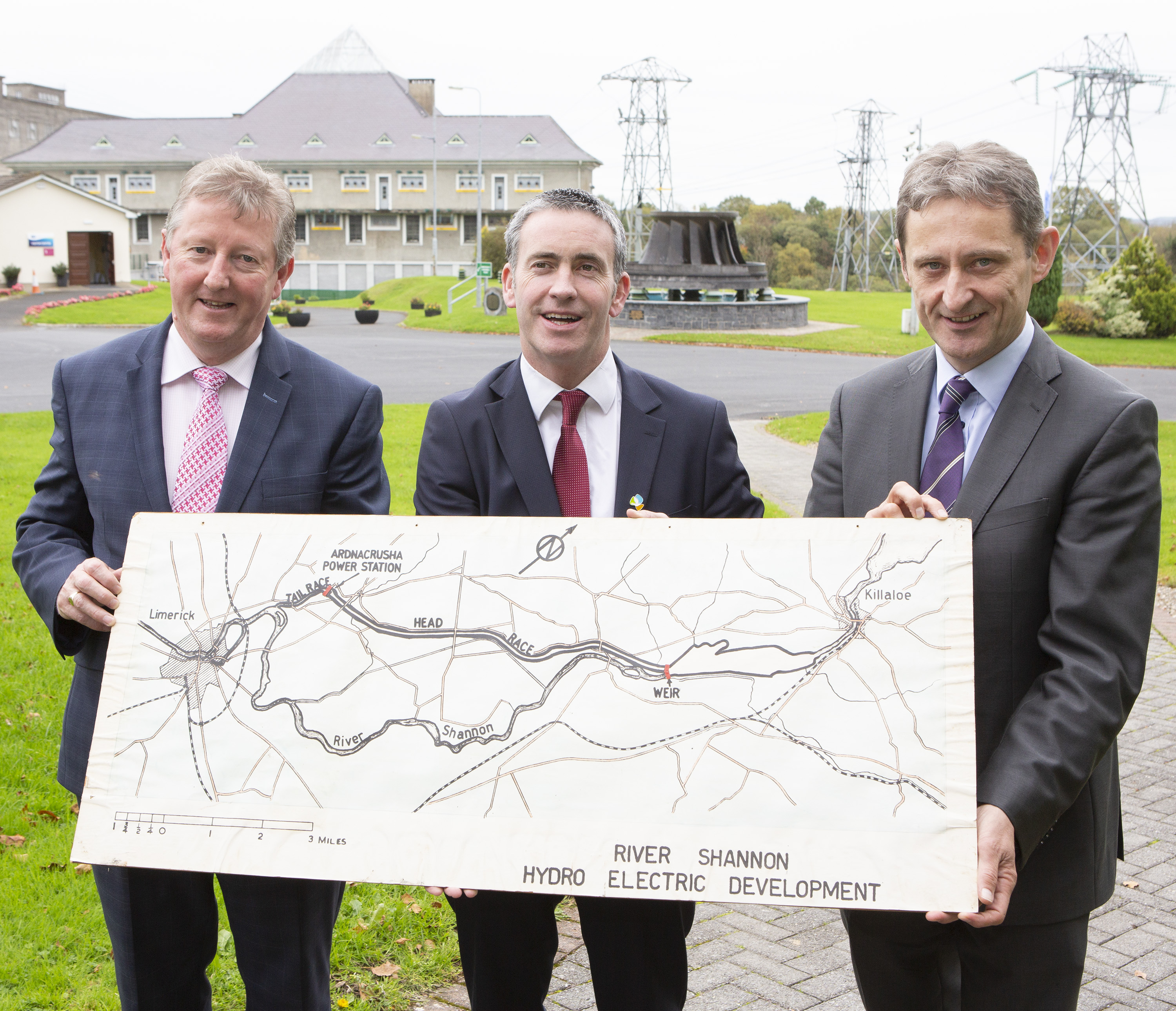 Fish passage on Shannon improvement launched. The Minister of State for Rural Affairs Seán Canny, TD and the Minister of State at the Department of Housing, Planning and Local Government Damien English, TD together with Jim Dollard, ESB Executive Director Generation and Trading recently chaired the inaugural meeting of a working group tasked with recommending ways to improve fish passage at Parteen on the River Shannon at Ardnacrusha Power Station. Picture: Liam Burke/Press 22.

The Minister of State at the Department of Housing, Planning and Local Government, Damien English, T.D., the Minister of State for Rural Affairs and Natural Resources, Seán Canney, T.D., and Jim Dollard, ESB Executive Director, Generation & Trading, today chaired the inaugural meeting of a working group tasked with recommending ways to improve fish passage at Parteen on the River Shannon.

In the early 20th century, the Shannon was renowned as a producer of salmon. In the intervening period, there has been a significant reduction of spawning and nursery habitat in the river for a number of reasons. While there are a number of barriers to fish migration on the Shannon, improved passage of fish around the hydroelectric scheme would enhance the ecological condition of the river and give fish improved access to the upper Shannon catchment – the largest catchment in Ireland. Thus, it could potentially enhance tourism and angling in the area. Establishment of a working group was a commitment in the Government’s River Basin Management Plan (RBMP) 2018-2021, published in April 2018.

The working group, to be chaired by the Department of Housing, Planning and Local Government (DHPLG), will consider the impact of barriers to fish migration at Parteen and Ardnacrusha and is tasked with making recommendations for improving fish passage in the environs. It is expected to make its recommendations within eighteen months. Technological and scientific advancements have enhanced fish connectivity through barriers elsewhere in Europe. Many barriers to fish movement exist in Ireland’s aquatic environment, however, the barriers in the lower Shannon are perhaps the most high-profile example.

Speaking this afternoon at the launch of the working group at the ESB’s Ardnacrusha Generating Station, Minister English said: “Today is an important step on our journey towards improving our water ecology in Ireland. Steady fish passage is vital for having sustainable fish stocks, and a healthy aquatic environment. The Government promised to establish a steering group to examine the barriers to fish passage at Parteen and Ardnacrusha and today we are delivering. I hope that the group’s work will ultimately lead to a solution for improving fish passage here, which, if successful, could inform our approach to other fish barriers across the country.”

Minister Seán Canney, who is responsible for Inland Fisheries Ireland (IFI), said: “I am delighted that IFI will be central to this group. Increased fish stocks in the lower Shannon could bring enormous recreational and economic benefits to the area: increased opportunities for local anglers and tourists fishing on the Shannon, and a resultant boost to the local economy. The Government is taking a national approach to addressing fish barriers and the IFI has a crucial contribution to make – both through membership of this group and through their development of a national inventory of barriers to fish passage on rivers.”

Jim Dollard, ESB’s Director of Generation, also welcomed the new initiative. “ESB is committed to Ireland’s environment and natural landscape, and every year we focus significant resources and expertise on waterways and fish conservation through a number of initiatives. ESB plays a significant role in the delivery of Ireland’s National Eel Management Plan, operates hatcheries on the Shannon, Erne and the Lee and eight fish passes and lifts along the rivers where we have a presence. We have also delivered many river development projects across the Shannon through our interactions with the local angling community. ESB is happy to continue to work with stakeholders to improve the Shannon as an amenity.”

Related Topics:esbShannon River
Up Next

Redemptorist Church signs up to We are Breastfeeding Friendly Limerick initiative