By Richard Lynch on November 20, 2020@richanthon 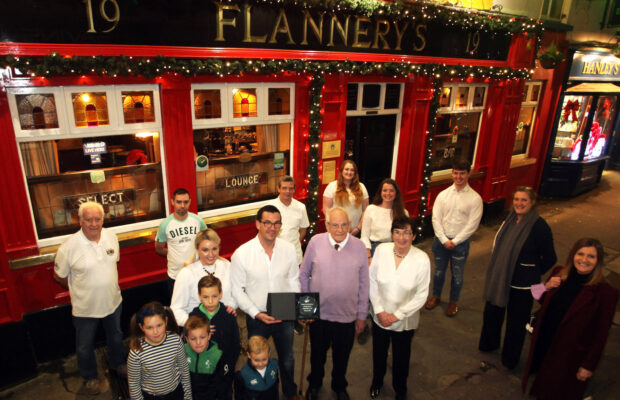 Limerick City Tidy Towns’ annual awards event for 2019 was due to be held back in March but became one of many victims of the Covid19 pandemic.  While they had planned on rearranging the event, this has proved impossible given the ongoing effects of the pandemic and the enforced closure for many months of the overall winners, Flannery’s Bar on Shannon Street, who were finally presented with the winner’s trophy this week, following an online vote by over 1,000 members of the public.

Thanks again to ⁦@LmkTidyTown⁩ for presenting the overall winner award for 2019.We’re not just a team,we’re much more than that.Having a great group of people around us with fantastic customers is what makes it special. @Limerick_ie⁩ ⁦⁦⁦@VFIpubs⁩ ⁦⁦ pic.twitter.com/YzMlABHO09

Flannery’s Bar was one of two joint winners in August 2019, along with Hanley’s Chemist, for the beautifully complimentary redecoration of their exteriors, retaining the traditional appeal of the units but giving them a vibrant new look, with bright new paintwork, planting and outside seating, which has proven to be a much needed asset to the pub, given the current restrictions on numbers due to social distancing requirements.

The trophy was presented to Paul Flannery and the entire Flannery’s team by Limerick City Tidy Towns Chair, Helen O’Donnell, and organiser of the monthly awards, Maura O’Neill on the evening of November 19, and the pub looked better than ever with its beautiful Christmas lights shining brightly.

“It’s been a shining light in a very tough year,” said proprietor Paul Flannery, “It’s fantastic, it’s a great achievement for my family. My Dad has been here since 1965. To be recognised for the work and effort the bar has meant to the city centre is great.”

Helen O’Donnell, Limerick City Tidy Towns added: “The really nice thing about this win is that it’s a public vote. This is a long-standing Limerick business, a couple of generations and another generation coming along. It’s really good to have a family business win this prize, and we are really delighted.”

The Limerick City Tidy Towns monthly awards for 2020 are currently suspended but hope to be back again in 2021.