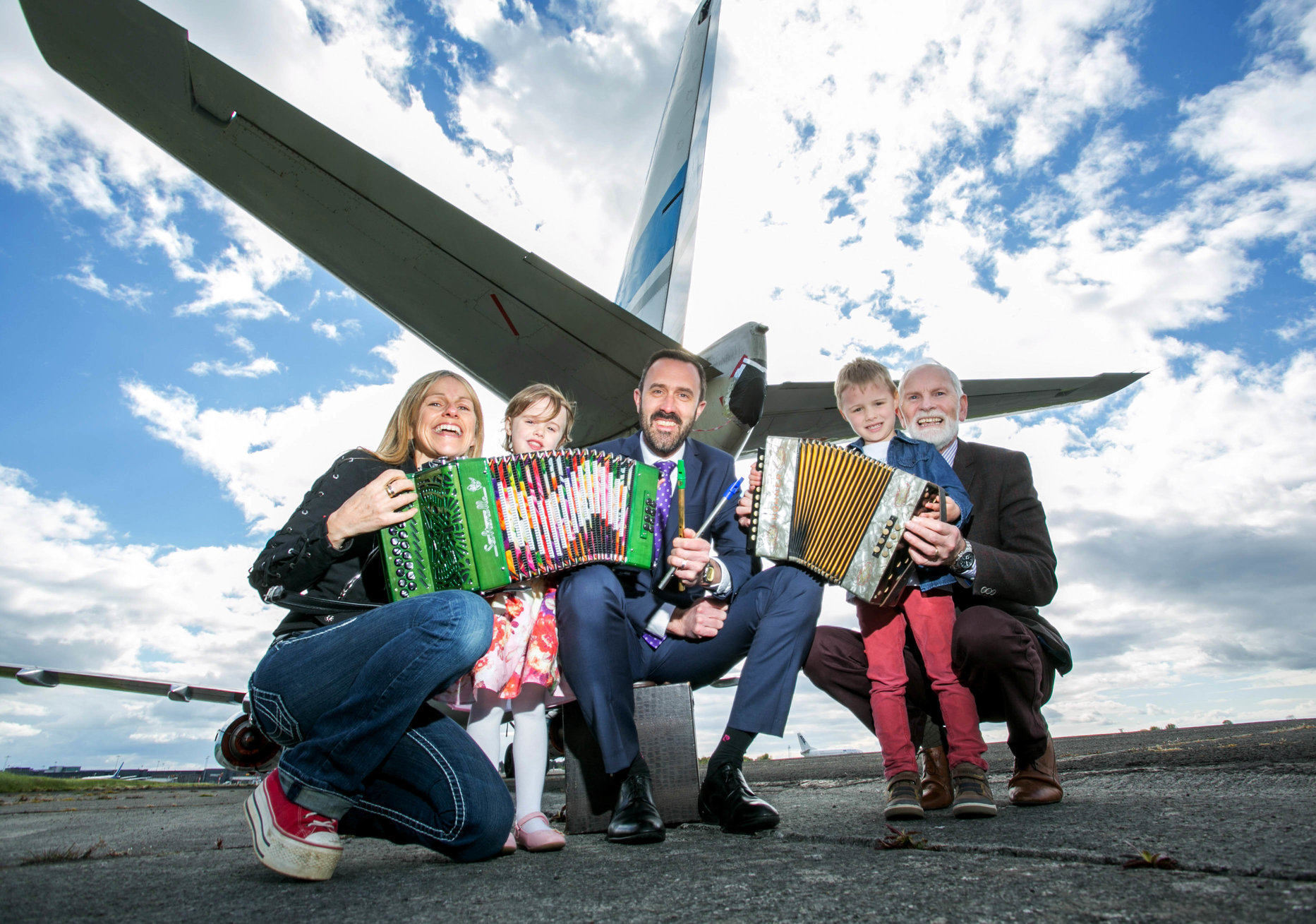 Shannon Airport has put its support behind ensuring that Ennis and Co. Clare gives Fleadh Cheoil na hEireann Inis 2017 its greatest ever send-off when it completes its two-year run in the Banner County in August.

Confirming that Shannon Airport will come on board as the main sponsor for the second year running for Ireland’s largest music festival of the year – Fleadh Cheoil na hEireann Inis 2017 – Matthew Thomas, CEO of Shannon Group, which operates Shannon Airport, said that this year’s event will be a party to remember.

Co. Clare’s best-known musician Sharon Shannon was on hand at the Airport for the official announcement of its sponsorship and gave 4-year-old twins Lillian and Colin McCullough from Kilnaboy,  an impromptu reminder of the sounds that will wrap themselves around Ennis and Clare from August 13th to 21st.

Announcing the sponsorship, the Shannon Group CEO said:  “The Fleadh was a huge success last year and showed just why Clare is considered by many to be the home of traditional Irish music.  We were incredibly proud to be associated with the Fleadh last year. The atmosphere around the town was electric, the sense of hospitality was incredible and at the end of it, all Ennis and Co. Clare got a huge economic injection.

“Based on that experience and the determination by the organisers this year to raise the bar even higher, we are already really looking forward to August.   I’ve no doubt that everyone will be looking back saying that Ennis really was a special host-town.”

Shannon Airport Managing Director Andrew Murphy was at the airport for the official announcement of its sponsorship and was joined by Frank Whelan Chairman of Fleadh Cheoil na hEireann Inis 2017 Executive Committee.  Commenting on their sponsorship Mr Murphy said:  “Ennis and Co. Clare proved to be the perfect host for the Fleadh last year.  It was the greatest single celebration in the county of music, song and dance, which are the essence of Clare culture. We are delighted to get on board and even more so this year as we are expecting the curtain to come down on the two years here in spectacular style.”

Up to 400,000, including 80,000 from abroad and many of them coming through Shannon Airport, will gather for this year’s Fleadh.

Also speaking at the launch, Sharon Shannon, whose performance in the ‘Shannon Aerodrome’ at the Fleadh in Ennis on Saturday night, August 19th will be one of the many highlights of the week-long celebration, said that there’s already a great sense of excitement building ahead of this year’s Fleadh.

“There was an incredible buzz all over the world last year about the Fleadh in Ennis.  I met so many people who were blown away by the hospitality and the atmosphere around the town. Ennis has got a great character, with the mix of narrow streets and open areas, and is tailor-made for the Fleadh.  People are already gearing up for another amazing treat of nine days and nights of music, dancing, singing and craic at the Fleadh here in Ennis once again. I’m really looking forward to it.”

Said Frank Whelan Chairman of the Fleadh Executive Committee: “We are especially pleased that Shannon Group has come back on board for 2017 with significant and vital sponsorship for Fleadh Cheoil na hEireann Inis 2017.

“Sponsorship is the lifeblood of an event of this scale. It would be impossible for us to host an All-Ireland to the standards we aspire to without it and we are deeply indebted to Shannon Group for such a strong vote of confidence in Comhaltas as a cultural organisation, in ourselves as the Fleadh Organising Committee and in the town of Ennis and County Clare. We are proud of Shannon Airport and its role in aviation, heritage and commercial business and we are delighted to be partnered with them through this sponsorship,” he said.

For more stories on music in Limerick click here