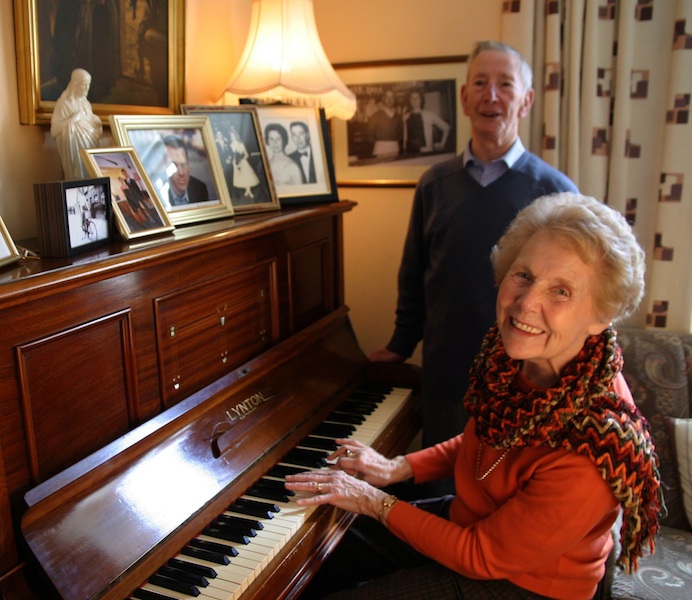 Florence Lynch pictured above with her husband Eric.

I wanted to pay tribute to one of Limerick’s true ladies, my mother Florence Lynch who left this earth in the hope of being reunited again with my dad, Eric, on Monday, March 7 at 3.06am at the University Hospital, after a long battle with Parkinson’s disease. In the hours before her passing, our entire family and some close friends surrounded her as we sang our favourite family songs.

My father Eric passed April 23, 2015, aged 86, and my mother was heartbroken and never recovered from his passing as they had been married for 59 years. In their lifetime, they were inseparable, and being apart proved just too difficult. For 42 years, she and Dad were the welcoming proprietors of the legendary pub bearing his name on St Joseph’s Street in the city. My parent’s pub was the first bar in Limerick to have music, the first to get a music license.

Dad bought the pub from Stephen Coughlan, who was Mayor of Limerick twice, during the 50s and early 70s.  My parents remained madly in love all their lives and ran the pub, which was synonymous with good times, a great atmosphere and above all, a first-rate music scene, for four decades and sold it in 1997. It was the first music house in Munster and has been closed for almost 20 years, soon after Mam was diagnosed with Parkinson’s Disease.

Plenty of songs were sung in their heyday, as Mam took the helm at the piano. She was steeped in a musical background and started playing when she was 13. Her father died when she was three so she couldn’t afford a piano, but her aunt and uncle bought her a piano and paid for all of her lessons. After that, my mother became the breadwinner in her family.

Florence and Eric behind the counter at Eric’s Pub in the 60’s.

From when they first lived together over O’Sullivan’s shoes in O’Connell Street, Mam used to play the piano in the apartment with the windows open and crowds of people would gather outside in the street listening to her play. She played all around the country when she was involved in the bands, and even when they went somewhere on holidays, she ended up as the pianist in some singsong.

In the early 90’s she went and got her music certificate from the School of Music and earned a distinction. She laughed at the memory. “The examiner didn’t realise that I was the student! He even asked me why I had waited so long to get my cert when I was finished.”

My parents worked incredibly hard, 7 days a week, 365 days of the year. Even on Christmas Day and Good Friday. I think that’s where I got my work ethic, as I love to work, it keeps me sane. I am one of eight children and we all lived upstairs over the pub. A big day in our house was Paddy’s Day and the pub would be thronged with people, spilling out onto the street. It was our busiest day of the year. All the family would dig in and I would spend the day washing glasses.

The pub was also famous for its 10 pence a game pool table and my dad kept the price at 10 pence for decades. There would a team from our pub going around the country for pool and darts matches and the Eric’s team loved nothing better to celebrate their victories upcoming their homecoming. Back in the early 80’s our pub was also one of the first to show movies and first to get a Betamax video player and then a VHS when they first hit the market. I remember the front lounge of the pub thronged with people who came to see screenings of movies such as ‘The Exorcist’.

Many Limerick people have wonderful, nostalgic memories of the pub, with my mother playing the piano and my dad singing songs. I remember as a child lying in bed upstairs as the sounds of all the old songs played below. Everywhere I go in Limerick people always ask after my parents. I come from a background stepped in history and I am incredibly proud of my heritage.

Richard with his parents at the Limerick LGBT Pride Parade in 2011.

When my parents eventually did close the pub my mam went on to play the piano for nine years in the Old Stand pub as the culture of music was such a huge part of their lives and they could not let it go. Eventually, my mother’s health got the better of her and she could no longer continue to play but she would play for my dad at home and he would sing her all the old love songs. I lived in NY for over 15 years but eventually came home in 2008 to care for my parents. I could not bear to be apart from them.

My Mam was a very kind, strong and determined person. Last week, Mam’s 24 yearlong arduous battle with Parkinson’s disease came to an end. She herself had spent years campaigning and raising funds for the treatment of Parkinson’s. In one year alone she raised €16,000 through the ladies mini-marathon in Limerick. For decades she would hold raffles in the pub and raised tens of thousands for charities such as St. Gabriel’s School. She was a brilliant musician, a voracious reader of books and an expert in Tudor history.

My parents were very loving, kind, liberal people who always put on emphasis on the importance of loving one another. I organised the first week-long LGBT Pride Festival in the city in 2008 and my parents came to the parade to support my community. After that, they would try to come every year and one of my siblings would roll mam down in her wheelchair to the top of O’Connell Street with my dad to watch the parade as it passed. Last year my mother attended the Parade alone as Dad was no longer with us. She was very emotional that day as it brought back so many good memories. It was their favourite Limerick parade.

Mam and Dad’s favourite day of the week was Saturday as they loved to visit the Limerick Milk Market for the weekly shop.

I Love Limerick would not exist, if it were not for my parents. I have done it voluntarily for 8 years for no money, not because I have no self worth, but because my greatest thrill was to see the smile on my their face every week when they opened my Limerick Chronicle column to read about their son working hard to try make a difference and to do something positive for their beloved city.

My parents were incredibly proud Limerick people and when I won Limerick Person of the Year in 2011, they both nearly burst with pride. They told me that ‘the best thing about Limerick, is the people, and that’s all we need.” Their favourite day of the week was Saturday as that meant a trip to one of their favourite haunts, the Limerick Milk Market.

At both of their funerals countless people approached me to tell me that this signified the end of an era in Limerick. A time when people cared about their neighbours. An age of romanticised storytelling accompanied by songs of yesteryear. I believe it to be true, as they just don’t make them like they used to anymore, because of my upbringing I am privy to a part of Limerick history that will soon be almost forgotten. That won’t happen if I have my way. I live by my mother’s advice to “never be a stranger in a person’s company” and to “always look for the good in people.”

I can look back with no regrets. I lived for my parent’s happiness, as did all my siblings. I am incredibly proud of all of us and blessed to be a Lynch.

Mam and Dad were married almost 60 years and were madly in love. Mam I am so happy you and dad finally together again. I love you both so much and I am sure right you are singing with the angels in heaven.

See a tribute to my Dad Eric Lynch, here