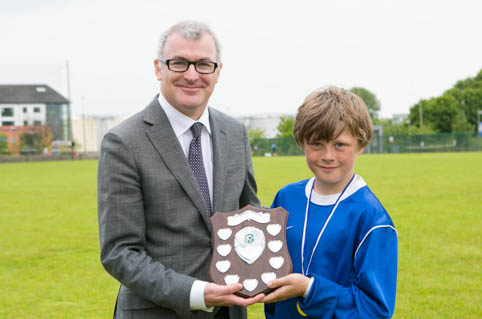 It may be 25 years since Italia 1990 but there was plenty of football fever in Mary Immaculate College on June 11 as the 7 annual League o’ Legends Soccer Blitz took place with over 110 boys and girls from fifth and sixth classes participating.

The League o’ Legends is a joint venture between the Transforming Education through Dialogue (TED) Project), a college initiative that works directly with primary and post-primary schools, and the PLUS schools network comprising representatives from nineteen local DEIS Limerick schools. The TED Project is based in the Curriculum Development Unit of the College and engages with the schools in activities and programmes throughout the school year. The annual League o’ Legends is a wonderful highlight of the year for many of the pupils. The tournament aims to build partnerships between schools and the College and to give the pupils an opportunity to explore what a third-level campus has to offer and to utilise the sports complex.

This year’s league failed to disappoint as  Scoil Íosagain C.B.S., Sexton Street retained the winner’s  plaque following their impressive win over the boys from Our Lady of Lourdes N.S. with a winning score of 4 – 1. Ben Dillon, Captain of the victorious team, was named Player of the Boys Tournament for his valiant efforts.

Our Lady of Lourdes N.S., Rosbrien also featured in the girl’s final but unfortunately for them they were beaten for a second year in a row by the mighty Corpus Christi N.S. team who knocked up a 4 – Nil defeat on the final score board. Team captain Sophie Quinn and team-mate Chloe McInerney were named Players of the Girls Tournament for their impressive footwork.

Speaking at the awards ceremony, Prof. Gary O’Brien, Associate Vice President heartily congratulated the children, their teachers and parents on their enthusiastic participation in the event and noted that MIC’s relationship with the schools is very precious to the College and the TED project and that the College looks forward to continued engagement and to welcoming the children back as students when they are older.

Commenting on the event he said; “It was wonderful to see the pupils from the PLUS network of schools engaging in playing together as a team, having fun and encouraging and supporting each other throughout the tournament.  I have no doubt we will be hearing of some of these players again”.

Also commenting on the event was Prof. Teresa O’Doherty, Dean of Education who said; “We do this work here in the College because we believe in making a positive difference in our community, locally, regionally, nationally and globally – indeed this is part of our Strategic Plan.  Each of you here today is a very important part of our community and we hope that one day you will come to Mary Immaculate College to continue your educational journey”.