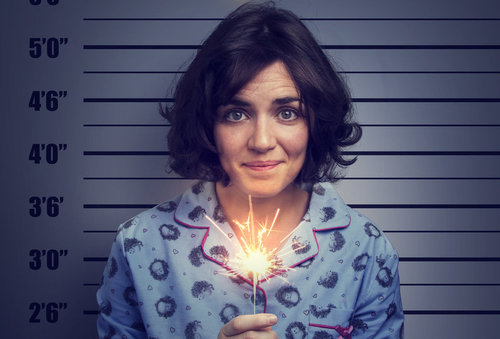 For all the fires not yet lit stars Irish singer, songwriter and performer Catherine Ireton.

For all the fires not yet lit is about Bride-to-be Claire who is not going to make a speech at the wedding. No way! She’s not that type of person. But what if being timid is a good thing? What if being scared is just you starting an adventure? And so it is that a morning’s outing to the shop in her slippers turns into a 24-hour odyssey for this unlikely heroine who discovers just what is possible when you look fear in the eye, no matter how small the battle.

The story is told through dialogue and song. Catherine is a natural storyteller and she brings us into the world of the character, Claire. “It is about finding what your true courage is. I want to recognise the smallness of all our battles in the grand scheme of things,” Catherine tells Ilovelimerick.

Catherine Ireton is a singer, songwriter, theatremaker, and performer from Castletroy and is based in Brighton. Since leaving Limerick to study art at UCC, the Castletroy girl has toured the world with Scottish band Belle and Sebastian.

God Help the Girl was a musical project by Stuart Murdoch, leader of the Scottish indie group Belle and Sebastian, featuring a group of female vocalists, including Catherine Ireton, with Belle and Sebastian as the accompanying band. The project has released a self-titled album, an EP and several singles. Central to the project is a musical film, featuring songs from the project’s recorded releases. The film was released in 2014.

Catherines theatre shows have toured all over the UK and Seoul, Hong Kong, Macau and Shanghai.

The main discovery of the project turned out to be Catherine, with whom Murdoch had established contact by chance in 2005. Catherine was studying Drama and Theatre Studies at University College Cork between 2002 and 2005. There she was the vocalist in the pop-jazz group elephant with whom she published the album ‘In the Moon’ in 2004. The band broke up in July 2005, but before that the songwriter and guitarist of elephant, Michael John McCarthy, moved to Glasgow to do a post-graduate course and passed the album In the Moon to his friend who showed it to Stuart Murdoch. When Stuart Murdoch heard the album of elephant, he invited Catherine, who was in her final year at university and both directed and played in theatre performances in Ireland at that time, to Glasgow in March 2005, held a trial recording session for her and afterwards asked her if she wanted to work with Belle and Sebastian. The singer agreed and moved to Scotland in the same year. She joined the project along with other vocalists, singing and recording demos of nearly all the songs.

Since then Catherines theatre shows have toured all over the UK and Seoul, Hong Kong, Macau and Shanghai. She has recorded seven albums and EPs and much of her recent work is produced by Farnham Maltings. Farnham Maltings supports, collaborates with and invests in artists to make new theatre and reach new audiences. She is also an associate artist of Glór.

During her early years in Limerick, Catherine was a regular Sunday soloist at the Dominicans for years as well as a Bunratty folk singer and she says that she owes a lot to her Limerick roots for opportunities that encouraged her to keep singing.

Speaking to Ilovelimerick about the upcoming show Catherine said, “I love Limerick so much and so proud to be premiering it in my hometown, even though it’s a while since I left the city, it’s so close to my heart!  The show is about courage but I think there is also something really scary but brilliant about sharing this show with the people who know me best and for them to be the very first people to see it. It feels like a privilege that I know I am going to get a good audience”.

For all the fires not yet lit was conceived & devised by Catherine and Gavin Stride, directed by Joanna Bohen and musical composition & direction by Ed Briggs.

For more on shows at the Belltable click here