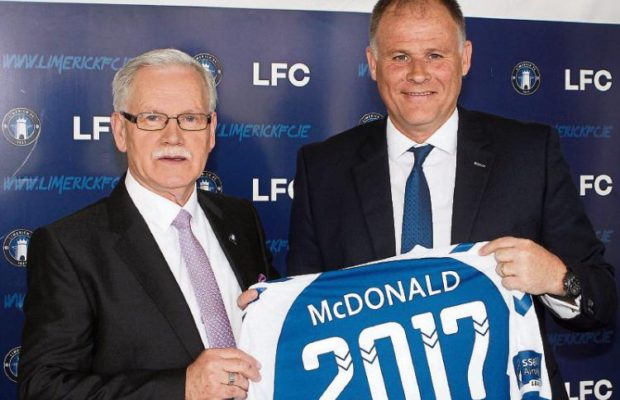 Neil McDonald has been unveiled as Limerick FC’s newest manager this Thursday morning, signing a deal that will keep him at Market’s Field until 2019.

McDonald was the assistant manager at Premier League side Hull City as little as four months ago but left after the sacking of Mike Phelan.

As a player, McDonald made over 300 appearances while playing for Newcastle United and Everton from 1983 to 1991.

McDonald will succeed Martin Russell as the Blues manager and replace Willie Bolland who has acted as interim manager over the past few weeks. He takes over as the club sit sixth in the League of Ireland Premier Division table, just three points behind the top four.

McDonald said: “I’m very impressed with the club and what they’re trying to do. I want to be a part of that and to push them onto a new level. That’s why I’ve come to the club on a long-term project.”

“Everyone I’ve spoken to since Monday speaks very highly of the football club. They’re trying to push the club to become an A-star club all the way through from youth up to the first team. It’s the first time in my career that I’ve signed a contract of this length. It shows I’m committed and shows the club has faith in me to bring the club where it wants to go.”

McDonald brushed off any suggestion of a culture shock and seemed excited to be moving to Limerick: “I’m here to live. I’ll move across as quick as I can. I’m looking forward to that. My family are comfortable with it. Hopefully, they can sample Ireland too.”

With ambitions of Europe, the ex-Blackpool boss admits that he will take on that goal and try to achieve it in his first year: “We’re three points off the European spot at the minute, so I don’t see why not. Step by step, I’ll introduce my stamp on things and hopefully, the players implement that on the football pitch. Europe is achievable.”

Asked whether he had spoken to Allardyce before taking the job, McDonald said: “I did and he’s always spoken very highly of Limerick. He said it’s a progressive football club.”

Neil McDonald will take charge of his first game as Limerick FC manager this Friday night as the Blues go up against the defending champions, Dundalk at the Markets Field at 7:45 pm.