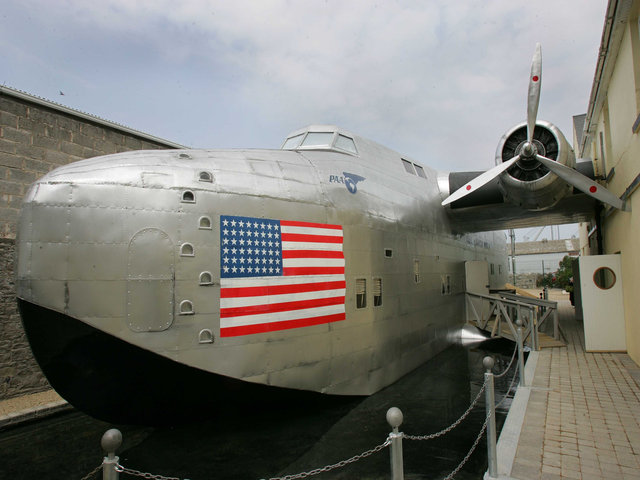 More than 350 former Pan Am workers reunite in Foynes Limerick, Ireland, on April 12 – 15, 2016. The workers and associates of Pan American World Airways, will reunite to share their memories and experiences of what was once the principal and largest international air carrier in the United States.

Organised by Foynes Flying Boat and Maritime Museum, supported by Fáilte Ireland and the Shannon Region Conference and Sports Bureau, the event represents the final ever Pan Am World Reunion and is only the second to be hosted in Europe.

Foynes was the first European Airport to which Pan Am began operating commercial transatlantic services on July 9, 1939 under the command of Captain Harold Gray. The ‘Yankee Clipper’ was the airline’s first Boeing B314 NC18603 allocated to the Atlantic division. A replica of the aircraft is on display at Foynes Flying Boat and Maritime Museum. Captain Charlie Blair, husband of the late Maureen O’Hara, was a frequent visitor and flew the last scheduled passenger flight from Foynes to New York in October, 1945.

The forthcoming former Pan Am Workers Reunite programme will feature talks, workshops, networking events and a visit to the former airport at Foynes allowing former pilots, engineers, administration staff, ground handlers and air hostesses, many of whom are now in their 70s and 80s, to recount their times with the airline

Reunion attendees, who later went on to become successful businessmen and women, filmmakers, journalists and authors after Pan Am’s demise in 1991, will also don their old Pan Am uniforms during the three-day reunion.

Among those travelling to Limerick next month is Edward Trippe, son of Pan Am founder and commercial aviation pioneer Juan Terry Trippe, 1899 – 1981, as well as Captain Don Cooper who was based with the carrier in Berlin for many years. Attendees will be from Singapore, Europe, South America, Guam, Hawaii, Canada and from all over the United States.

Margaret O Shaughnessy, the Director of Foynes Flying Boat & Maritime Museum initiated the event two years ago when she spoke at one of the Pan Am Reunions in Long Island, New York.

“One of the attendees Merry Barton and I stayed in touch and I am delighted we have been successful in bringing this unique aviation event to Ireland,” she said.

Ms. O’Shaughnessy continued, “The Boeing 314 has become the “Quintessential” Pan Am clipper flying boat, the one people think of when they recall the era during which Foynes flourished as the hub of aviation activity between North America and Europe. I look forward to bringing former Pan Am employees to the Foynes Flying Boat & Maritime Museum to visit the replica Yankee Clipper on display. It is sure to be a nostalgic and memorable visit for everyone concerned.”

“This event will also deliver a significant boost to the local economy with attendees staying in hotels throughout Limerick City and in Adare. Many also have planned a holiday in Ireland around the Pan Am Spring Reunion,” said Ms. O’Shaughnessy about former Pan Am Workers Reunite.

Saturday, August 18, 1945 was a record day for Pan American World Airways operations in Foynes, two clippers, the ‘Atlantic’ and the ‘Dixie’ arrived from New York in the morning and returned that night. 101 transatlantic passengers were handled at the airport, a record for a day’s operation by one airline. Travelling were nationals of Great Britain, Argentina, Sweden, Switzerland, France, Czechoslovakia, Netherlands and the USA.