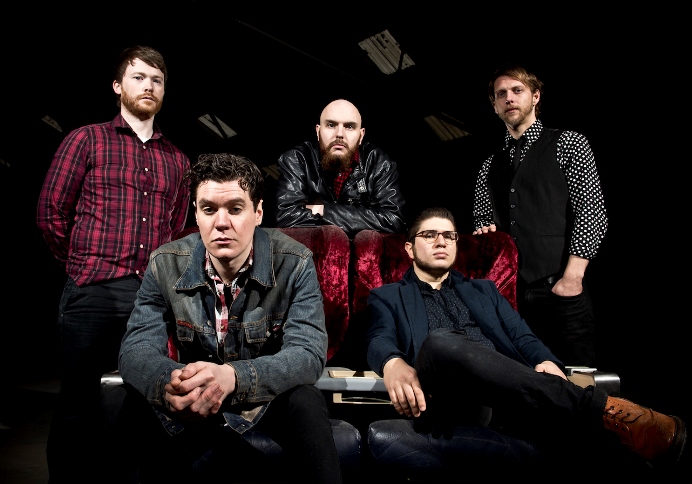 After a year in hiding, writing, recording & honing their craft, Fox Jaw are ready to release their second long player, ‘Ghost’s Parade’, and are equipped with a sagacious mind for the road ahead…

A modern band with an old soul, they have been producing a trend shaking, majestic deep growl, which swaggers from the terrific to the sublime. A band that usually err on the side of darkness, but always keeping it sweet and melodic with an honest collection of dark pop songs. Critics praising them as “True hidden gems”, “A seductively gloomy sound in a league of its own … will both mystify and satisfy” (State.ie). And “one of Ireland’s most inventive and engaging rock bands” (Hotpress).

With an already successful year of single releases with an impressive amount of airplay, raising many eyebrows in the Irish music industry, as a band proving themselves with an ever expanding sound. From the sleazy blues ballad sounds of ‘Kerosene’, to the rock & roll foot stomps of ‘Hijack’ – ‘Falling Debris’ further adds to an already technicolor palette, and gives one more snippet before the new long player finally gets its public release.

A simple background check on the band reveals, that the guys are one of the hardest working bands in the country. Formerly Fox Jaw Bounty Hunters, they released their debut album ‘The Devil In Music’ in 2011, and played close to 100 shows within 24 months, across Ireland, the UK & Canada (80 of those shows were within the first 10 months!). With many festival appearances including Indie Week (Toronto), Glasgowbury Festival, Vantastival, Arthur’s Day, Knockanstockan and even being added to the Main Stage at Indiependence Festival to share the boards with the like of Ash, Editors & Therapy?. Going from strength to strength, featuring on a Becks Vier TV advertising campaign, a flip cover of Hot Press, and receiving an ‘Album Of The Year’ Award from Independent UK music website, The Underclassed. There’s a strong chance you’ve come across this band before, without even realising!