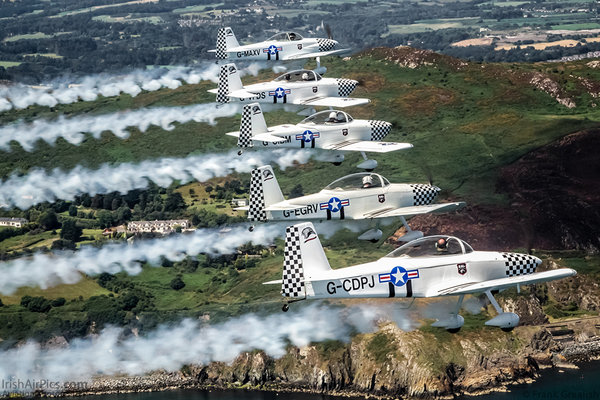 Foynes Air Show 2017 Unveils the First of the International Acts

Foynes Air Show 2017 Unveils the First of the International Acts
Spanish Air Force F-18 jets, British Spitfires, and Viggen jets flown by the Swedish Air Force are just a small sample of the daredevil acts unveiled this week as part of the Foynes Air Show 2017, the largest airshow ever to be held along the west coast of Ireland and supported by the Irish Aviation Authority.
Made up of 16 awe-inspiring acts, this year’s show will not only look to the future of aviation with demonstrations from some of the world’s most modern aircraft, but it will also pay homage to the past and the well-documented aviation history of Foynes.

On display on July 22, 2017 will be the Catalina flying boat marking the 80th anniversary of the first transatlantic flight, undertaken on July 5, when flying boat G-ADHM Caledonia, commanded by Capt. A.S. Wilcockson, took off from Foynes for Botwood in Newfoundland. Coming in the opposite direction on the same day was Capt. Harold Gray in the Pan American Sikorsky S42B N16736 Clipper III, which landed in Foynes before travelling on to Southampton.

Margaret O’Shaughnessy, Director of the Foynes Air Show 2017 said, “This is the biggest year ever for the Foynes Air Show. We have 16 acts coming from all across Europe, and visitors to the show will be amazed at the daredevil acrobatics of the skilled pilots and the impressive sight of some of the world’s most extraordinary aircraft.”

“This year’s show is a massive undertaking for Foynes and indeed Limerick, and has the potential to be the standout event of 2017,” she added.

The line-up of aerobatic performers includes a demonstration of an F-18 jet from the Spanish air force display team – a first for Ireland. The Ravens, a six-ship RV4/8 Aerobatic formation display team based in the UK will bring drama to the skies over Limerick, while the ‘Swedish Air Force Historic Flight’ will showcase Viggen jets – the Swedish single-seat, single-engine, short-medium range combat aircraft.
A British Spitfire, probably the best-known fighter plane ever produced, will also be part of the line-up. Norway will be represented by an MIG aircraft as well as a pair of ‘Vampires’, while Irish aviation will be celebrated at the event by the Irish Historic Flight Foundation flying Boeing Stearman and Chipmunk aircraft as well as a number of exclusive Foynes Air Show 2017 acts, to be announced soon.

The main supporter of the Foynes Air Show 2017is the Irish Aviation Authority (IAA) as part of its #AviationIreland campaign to promote aviation across the State. The IAA also supports the Bray Air Display which will take place on Saturday and Sunday, July 22 and 23, 2017.
Eamonn Brennan, Chief Executive of the Irish Aviation Authority said, “The Foynes Air Show has been a really great event in recent years and this year promises to be an extra special one for fans of aviation across Ireland. Aviation is a hugely important economic driver for our country and this year under the IAA’s “Aviation Ireland” campaign we are supporting not just one, but two, spectacular air shows over the same weekend –  at Foynes and at Bray, making this year an extra special one for fans of aviation across Ireland. We see this as a great avenue to raise the profile of aviation and to generate an interest in our industry.”
Please click here for more information on the Foynes Air Show 2017.
To read more stories about Foynes Air Shows, please click here.

Dominican/St Saviours Triduum Parish Celebrations of Our Lady of Limerick