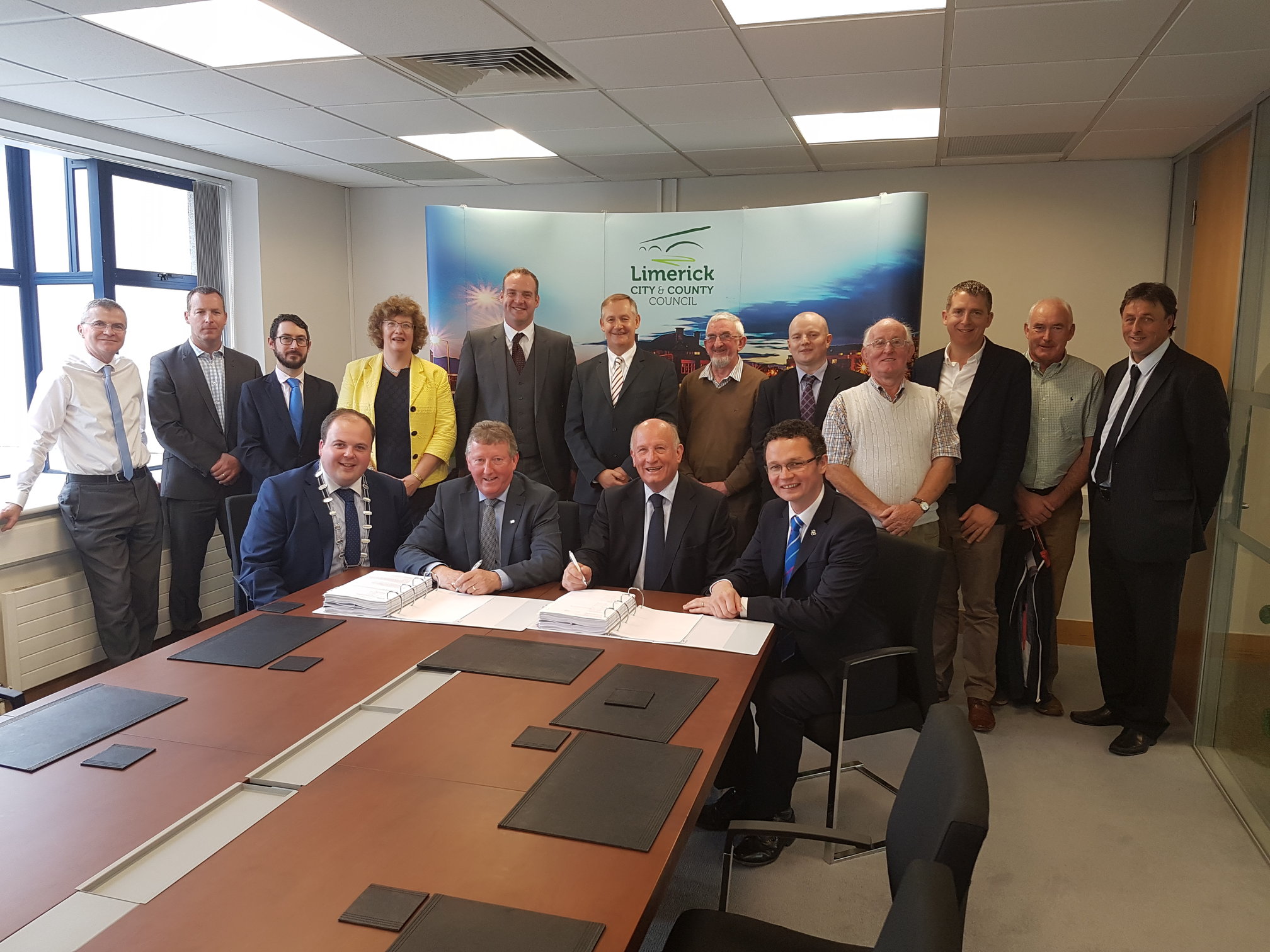 A 2.3 million euro Foynes Flood Alleviation Scheme is to begin in September, a permanent tidal defence barrier will be erected in Foynes following approval from the government, through the Office of Public Works.

In January and February of 2014, the highest ever tides ever witnessed in Foynes were recorded.  The resultant flooding caused major upheaval for residents and business owners alike.

Consulting Engineers Nicholas O’Dwyer and JBA Consulting were appointed to carry out a scheme design and oversee the construction of permanent flood defences for the town.

Following a competitive tender Wills Bros Ltd, headquartered in Foxford, Co. Mayo was selected for the project.  Contracts have been signed with works due to begin in September.

Speaking at the contract-signing ceremony, Minister of State with special responsibility for the Office of Public Works and Flood Relief Deputy Sean Canney said: “Limerick has been particularly hard hit by flooding in recent years, with many flood events having affected such areas as King’s Island, Foynes, Askeaton, Corbally, Ballysteen and others.”

“My Office, the Office of Public Works in partnership with Limerick City and County Council, has been working hard to progress solutions to these flooding problems.  I would like to acknowledge also the great efforts of local public representatives and community groups in helping to advance these Schemes,” he said.

“I am very pleased that a contractor is now being appointed to construct the Foynes Flood Alleviation Scheme.  This will provide the town with badly needed protection from risk of flooding into the future.  I and my colleagues in Government are committed to ensuring that the other flood relief schemes for Limerick and the rest of the country will be delivered as part of the significant investment in funding of €430m over the period 2016-2021,” the Minister added.

Joe Delaney, Design and Delivery Services with Limerick City and County Council outlined the background to the project.

“Limerick City and County Council, in conjunction with the OPW who are funding the scheme, initiated a Foynes Flood Alleviation Scheme, with the objective to provide a permanent tidal defence barrier to protect Foynes from future tidal flooding while ensuring that the public amenity and business function of Foynes waterfront is not negatively impacted upon.  The proposed tidal barrier will flank Irish Rail lands for much of its length on lands made available by Shannon Foynes Port Company,” he said.

Robert Gallagher, Senior Executive Engineer with the council said: “The consultants carried out an assessment of existing embankments, detailed design of a flood barrier defence system and progression of the scheme though the Part VIII process to completion of works on the ground.  The public was also consulted on the project.”

“With contracts now signed for the €2.3 million euro project, work is due to begin in September and should be completed within 5 to 6 months,” he added.

For any news from the Foynes area covered by I Love limerick click here.

For news across Limerick from I Love Limerick click here.