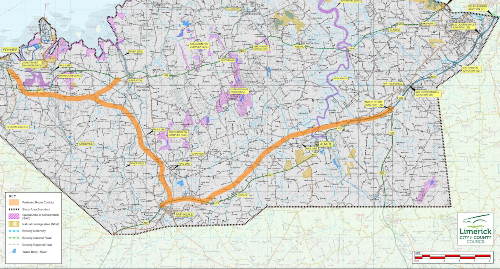 Limerick City and County Council has welcomed the government go-ahead to submit the Foynes to Limerick Road project to An Bord Pleanála for approval.The go-ahead was given after a meeting of the Cabinet.

The proposed road development, which includes a bypass of Adare, will cost in the region of €400 – €450 million and is 34km in length connecting the Core Port of Foynes to the national motorway network, on the outskirts of Limerick city.

A c200m long clear-span bridge over the River Maigue at Adare, A bridge over the River Deel and other smaller river bridges, Three bridges over the Foynes to Limerick railway line, Overbridges and underbridges to accommodate public and private roads and the Great Southern Greenway Limerick, Drainage and Utility diversions and Realignment of existing roads, access roads, accommodation works, landscaping and ancillary works

Welcoming the news, Mayor of the City and County of Limerick, Cllr Michael Sheahan said: “This is important news not just for West Limerick but for the entire mid-west region. A lot of work and careful planning has taken place since the route selection report was published in June 2016. Limerick City and County Council is hopeful of having the proposed road in place by 2025/2026. However, there are a number of significant hurdles to be crossed in the meantime, the first being the approval of An Bord Pleanála.”

Chief Executive of Limerick City and County Council Dr. Pat Daly said: “The proposed road will be very significant for the strategic development and expansion of Shannon Foynes Port, for West Limerick and the Mid-West Region in general. The road will support the envisaged expansion of Port of Foynes as outlined in the government’s National Ports Policy 2013 and its designation as a Core Port under EU regulations (Trans European Network TEN-T). The TEN-T regulations require a high-quality road connection between Foynes and Limerick, improving journey time, reliability and safety for all road users.

Brian Kennedy, Director of Physical Development with Limerick City and County Council added: “This project will include a bypass of Adare, which will run to the north of the village, and it will remove in the region of 70 – 80% of the traffic currently passing through Adare daily which is around 17,000 vehicles. Adare is a notorious bottleneck and this new bypass is vital to improve safety and remove traffic delays.”

The Foynes to Limerick Road Scheme including the Adare bypass is a major national infrastructure project to proceed to development as referenced in Project Ireland 2040 and the National Development Plan (NDP) 2018-2027. Reports and drawings are currently being finalized with a view to making a submission to An Bord Pleanála in the coming weeks.

For more information on The Foynes to Limerick Road project click here.