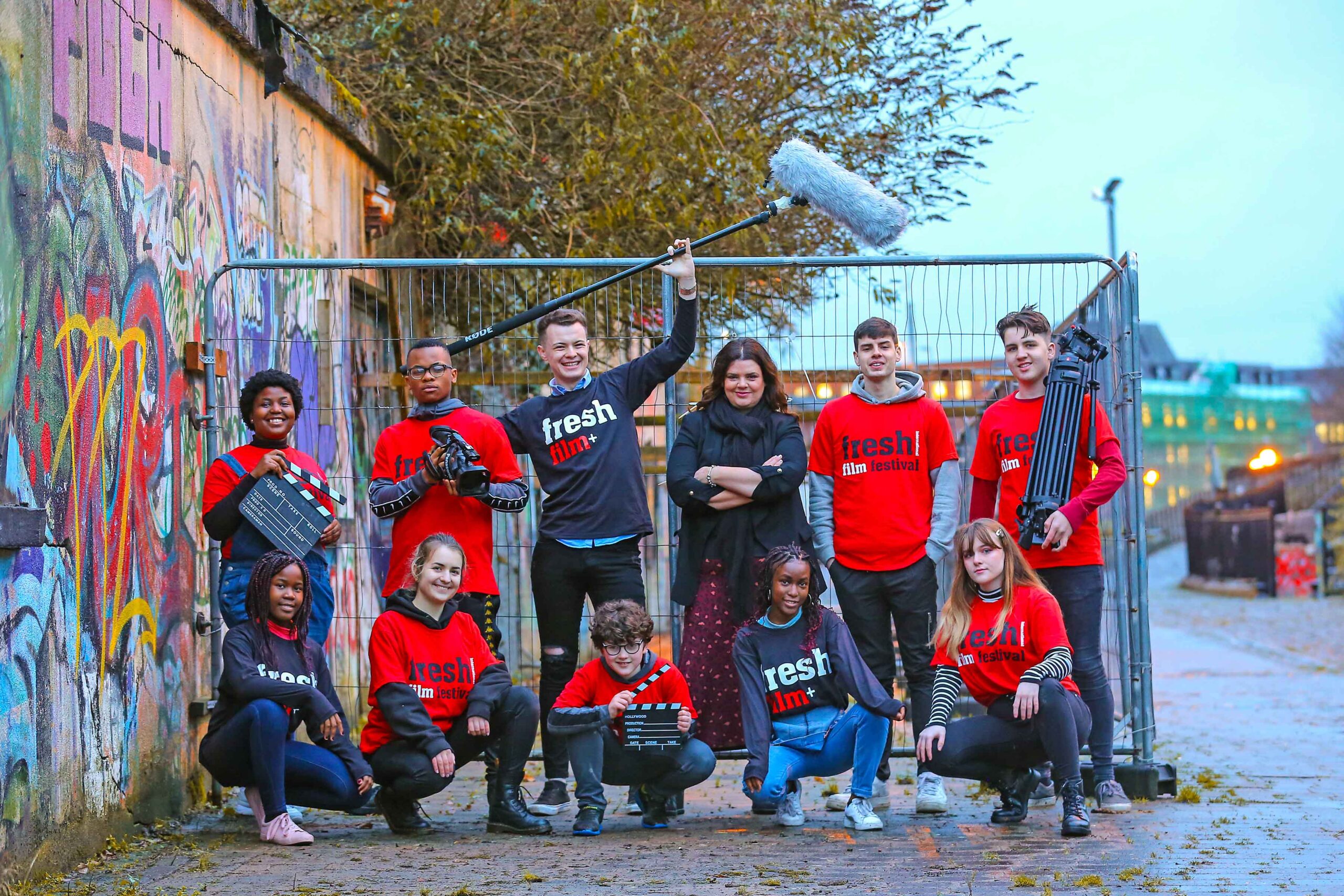 The Festival was started in Limerick in 1996. Jayne pictured here with young filmmaking talent from Limerick and Clare (picture taken before social distancing.) Picture: Dermot Culhane

All has changed in the world of film festivals post-Covid-19, and Fresh International Film Festival (March 22-28) is going digital for the second year running as it celebrates its 25th anniversary of giving young filmmakers a platform to shine.

Fresh Film encourages young people to make films by hosting the annual Fresh International Film Festival, which invites young people from Ireland and overseas, aged 7 to 18 years, to create, exhibit and share films and compete for Ireland’s Young Filmmaker of the Year. The Festival has been a stepping stone for young people launching careers in the film and TV industry and past winners have gone on to work for companies such as RTE, the BBC, and Netflix.

Ireland’s Young Filmmaker of the Year Awards 2021 will take place online with presenter and documentary filmmaker Stephen Byrne and comedian and writer Justine Stafford hosting this year’s awards. Jayne Foley, founder and artistic director of Fresh Film said, “The Fresh team at HQ have devised a virtual solution as we have an amazing community of young filmmakers and while we can’t bring them together in one room, for now, we can bring them together online. In the spirit of Fresh we want our online activities to connect, inspire and support young filmmakers.”

Fresh International Film Festival 2021 takes place Monday, March 22 to Sunday, March 28 and features an alumni showcase and a week of film screenings and workshops with the Junior Finals taking place on Thursday, March 25 and the Seniors Finals on Friday, March 26 via a YouTube live stream.

The Festival has reached its 25th year. It’s a big, round number for a festival anniversary and the festival’s schedule reflects the 25 year transition from analog to digital, with workshops and discussions setting the tone for the films to follow.

Jayne remembers, “When we started the Festival in Limerick in 1996, there wasn’t an outlet for young filmmakers to show their films. In setting up Fresh Film we were looking to create those shared moments. We loved cinema and we wanted to create a community of young filmmakers who would bond over screenings at a Festival. The Ireland’s Young Filmmaker of the Year Competition meant that the films screened and stories told would be their own. Analog video was king then, and we watched as video cassettes dropped through our letterbox from all over the country. And they’ve continued coming, on shiny discs, memory sticks and links now from Ireland and across the world.”

The closing date for the call for entries for , Ireland’s festival celebrating the best in young filmmaking is this Monday February 22, 2021! Fresh International Film Festival 2021 takes place online from March 22 – 28, 2021.#freshfilm
?@DermotCulhane pic.twitter.com/2vOJ6cyHTk

“The most exciting aspect of the Festival for us each year is the fact that the festival has become a launching pad for young talent. Seeing first-time filmmakers in the early stages of their budding careers, finding their footing as storytellers before an audience is a golden experience. It’s a nurturing environment and two and a half decades ago when the Festival started, we had no idea of how important it would become in the lives of countless young creatives,” said Jayne. “It’s a milestone year and like every year shows no shortage of ambitious projects on display. The Festival is culturally resonant  and committed to exhibiting films that express fresh voices with the hope that these films will provide invaluable exposure for young filmmakers, act as an archive of what young people have been doing with their lives, provide a social statement on how Ireland has changed and ultimately provide inspiring entertainment for all.”

Further details are available from www.freshfilmfestival.com.

Fresh International Film Festival invites young people from Ireland and overseas, aged 7 to 18 years, to create, exhibit, and share films. The festival provides an opportunity for these young filmmakers to have their work seen on a cinema screen for the first time and to compete for the title of Ireland’s Young Filmmaker of the Year. All films submitted are also considered for a range of Specialist Awards including the Radharc Trust Award (documentary), the Cartoon Saloon Animation Award, the RTE 60 Second Short Film Award, and the RTE Factual Award, in addition to the International and Audience awards.

Fresh Film runs a number of initiatives throughout the year, including a Hothouse programme designed to bring young people of different ages and diverse backgrounds together to share their film experiences and create new collaborative work, as well as distributing Irish films made by young people to festivals all over the world.

One Million Stars to End Violence launch at Hunt Museum