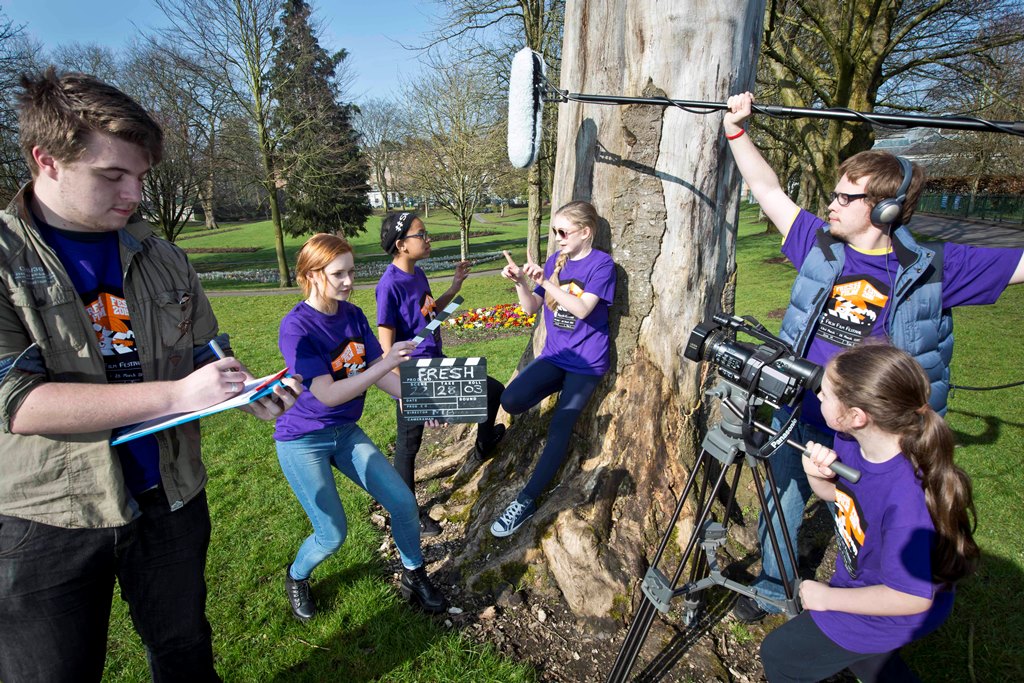 Fresh Film Festival, Ireland’s leading festival celebrating young filmmakers, takes place 22-28 March in Limerick.  Festival highlights include the finals of Ireland’s Young Filmmaker of the Year Awards, workshops in scriptwriting, animation and music videos, feature screenings and international shorts.  Special guest Roddy Doyle will lead a workshop in scriptwriting with 16-18 year olds, followed by a screening of “The Commitments” and a post-screening Q&A.  The full festival schedule is available from their website here, or be contacting them at (061) 319555.

Fresh Film Festival encourages young people to make films by hosting an annual international film festival for young people, presenting Ireland’s Young Filmmaker of the Year Awards, acting as an advocate for young filmmakers and promoting their work worldwide.  Fresh runs a number of initiatives throughout the year, including a Hothouse programme designed to bring young people of different ages and diverse backgrounds together to share their film experiences and create new collaborative work, as well as distributing Irish films made by young people to festivals all over the world.  Fresh Film Festival is supported by the Arts Council of Ireland, Limerick City and County Council and RTE Supporting the Arts.

The Festival has Junior, Senior and International categories for individual and group projects.  Many young people choose to make their films independently, while others work on film projects through their school, youth group or film school.  Films must be original and can be up to 15 minutes duration for Seniors or 10 minutes duration for Juniors.  Films submitted are screened at one of the Regional Heats which take place in Dublin, Cork, Galway and Limerick, while the finalists’ work will be screened during Fresh Film Festival in Limerick.  Full terms and conditions of entry are available from their website here.

The central focus of the Fresh Film Festival each year is the opportunity to compete for the title of Ireland’s Young Filmmaker of the Year.  Fresh received 428 submissions for this year’s festival, the highest number of submissions in the festival’s 19 year history.  All films have now been viewed by the Fresh screening panel, presented at the regional heats in Limerick, Cork, Galway and Dublin, and the finalists have been announced.  These shortlisted films will be screened at Fresh Film Festival 2015 and the Ireland’s Young Filmmakers of the Year will be announced on March 25 (Senior) and 26 (Junior).

Roddy Doyle, who will lead a scriptwriting workshop and will also participate in a public Q&A session at the Festival. Picture by: Ken Coleman.

Fresh Film Festival is very pleased to welcome renowned writer Roddy Doyle to Limerick for a scriptwriting workshop with young writers and for a public Question & Answer session after a festival screening of “The Commitments”.  The workshop is now sold out, but there are still tickets available for the film at The Odeon Cinema, Castletroy on Tuesday March 24 at 12pm.  Tickets can be booked through Fresh Film Festival on (061) 319555, or by e-mailing them at [email protected] or at The Odeon on the day (subject to availability).

Now in its 19th year, Fresh Film Festival encourages young people from Ireland and overseas, aged 7 to 18 years, to create, exhibit and share films.  The festival provides an opportunity for these young filmmakers to have their work seen on a cinema screen for the first time and to compete for the title of Ireland’s Young Filmmaker of the Year.  All films submitted are also considered for a range of Specialist Awards including the Radharc Trust Award (documentary), the Brownbag Animation Award, the RTE 60 Second Short Film Award and the RTE Factual Award, in addition to the International and Audience awards.

Highlights of Fresh Film Festival 2015 (all events are open to the public unless otherwise stated):

– Feature screening of “Populaire”, a humorous and glamorous film set in 1950s France: Monday March 23, 10am, The Odeon Cinema, Castletroy.

– Feature screening of “Flight of the Doves”, based on the well-known book by Irish author Walter Macken: Tuesday March 24, 10am, The Odeon Cinema, Castletroy.

Looking forward to this year’s festival, Fresh Film Festival Director Jayne Foley stated “Fresh Film Festival provides an opportunity for young filmmakers to see their work on a big screen, to meet like-minded young people and to create a community of young filmmakers in Ireland who can bond over screenings of their films.  Many of our previous winners have gone on to forge successful careers in film and television, such as Donal Foreman, who made the stunning “Out of Here”, released in 2014, and Nick Sheridan, who co-presents News2Day on RTE, and horror film director Conor MacMahon, and we’re sure that there are many bright futures among this year’s finalists!”