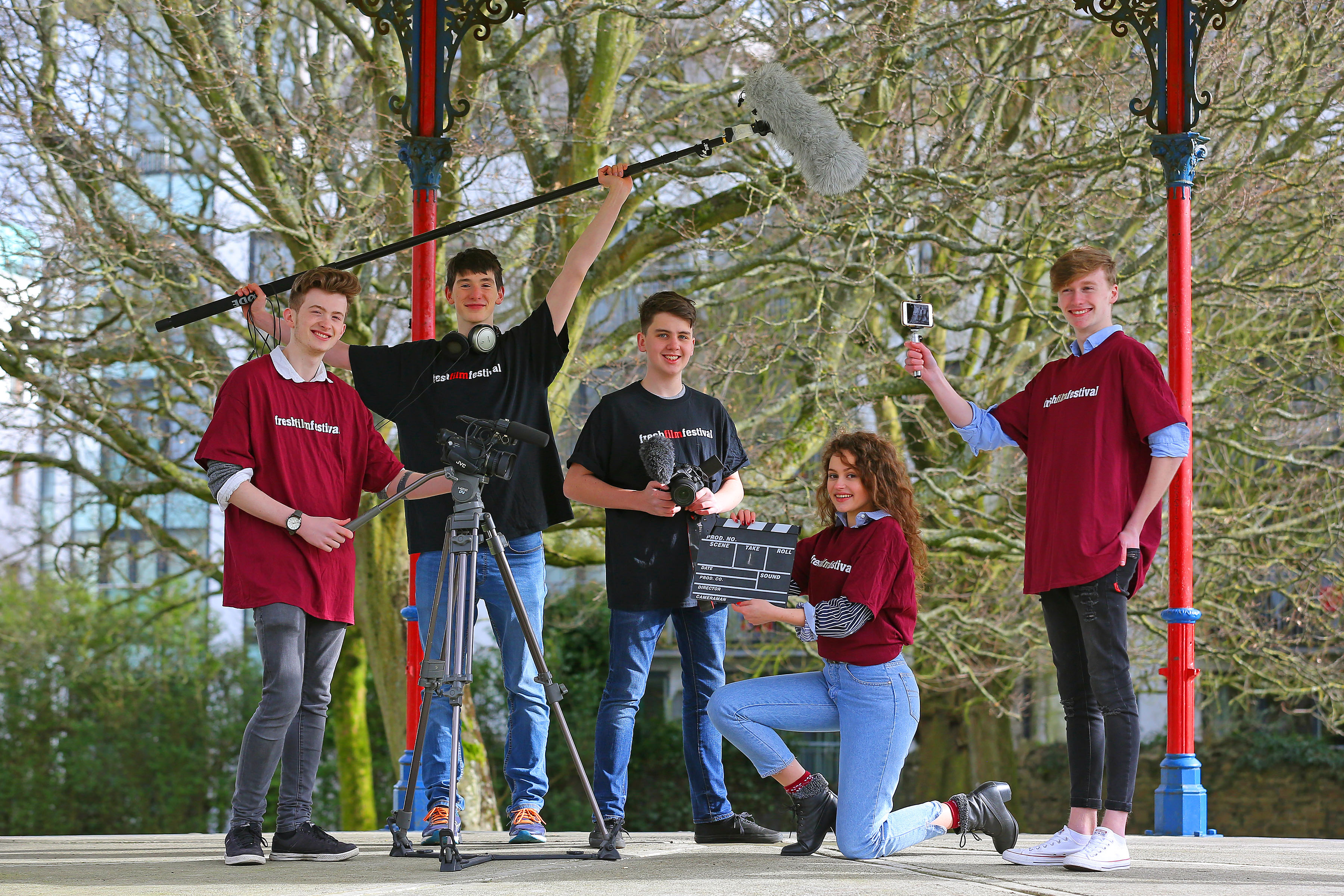 Limerick’s Fresh Film Festival, which will take place from March 20-25, has announced its festival programme. The highlight of the Fresh Film Festival 2018 programme will be the finals of Ireland’s Young Filmmaker of the Year, which received a record of almost 1,500 entries. The junior winner will be announced on Wednesday, March 21st and the senior winner on Thursday, March 22nd.

Young filmmakers pictured in the Peoples Park in Limerick celebrating the news that their films have got through to the finals of Ireland’s Young Filmmaker of The Year 2018 which will take place during the Fresh Film Festival on March 21st and 22nd in Limerick. See freshfilmfestival.net. Picture: Dermot Culhane.

Other highlights of Fresh Film Festival 2018 programme include feature screenings and workshops. Films screened at the festival will include the Academy-Award nominated ‘My Life as a Courgette’ and John Butler ‘s ‘Handsome Devil’ in association with IFI education, as well as Myron Dewey’s ‘Awake, A Dream from Standing Rock’ in association with Limerick Spring. Workshops will include an animation workshop with Brazilian animator Alexandre Almeida Juruena De Mattos and an industry master class with The National Youth Film School.

Now in its 22nd year, Fresh Film Festival encourages young people from Ireland and overseas, aged 7 to 18 years, to create, exhibit and share films. The festival provides an opportunity for these young filmmakers to have their work seen on a cinema screen for the first time and to compete for the title of Ireland’s Young Filmmaker of the Year. All films submitted are also considered for a range of Specialist Awards including the Radharc Trust Award (documentary), the Boulder Media Animation Award, the RTE 60 Second Short Film Award and the RTE Factual Award, in addition to the International and Audience awards.

Reflecting on the volume of entries for this year’s festival, Fresh Film Festival Director Jayne Foley commented, “Fresh Film Festival is all about encouraging young people to tell their stories through film, so the record number of submissions this year shows we have a nation of young storytellers with something to say and the creative means to say it. We’ve been overwhelmed by the entries this year: The future of filmmaking in Ireland is bright”. She went on to note the importance of Ireland’s Young Filmmaker of the Year, “Ireland’s Young Filmmaker of the Year Competition gave all these young people a focus – an event to aim for. This is the core part of the festival – young people making and screening their own stories before an audience of their peers”.

Fresh Film Festival encourages young people to make films by hosting an annual international film festival for young people, presenting Ireland’s Young Filmmaker of the Year Awards, acting as an advocate for young filmmakers and promoting their work worldwide. Fresh runs a number of initiatives throughout the year, including a Hothouse programme designed to bring young people of different ages and diverse backgrounds together to share their film experiences and create new collaborative work, as well as distributing Irish films made by young people to festivals all over the world. Fresh Film Festival is supported by the Arts Council of Ireland, Limerick City and County Council and RTE Supporting the Arts.

Further details  about the Fresh Film Festival programme 2018 are available from here.

Related Topics:fresh film festivalFresh Film Festival 2018Ireland's Young Filmmaker of the Yearirelands young filmmaker of they year 2018
Up Next