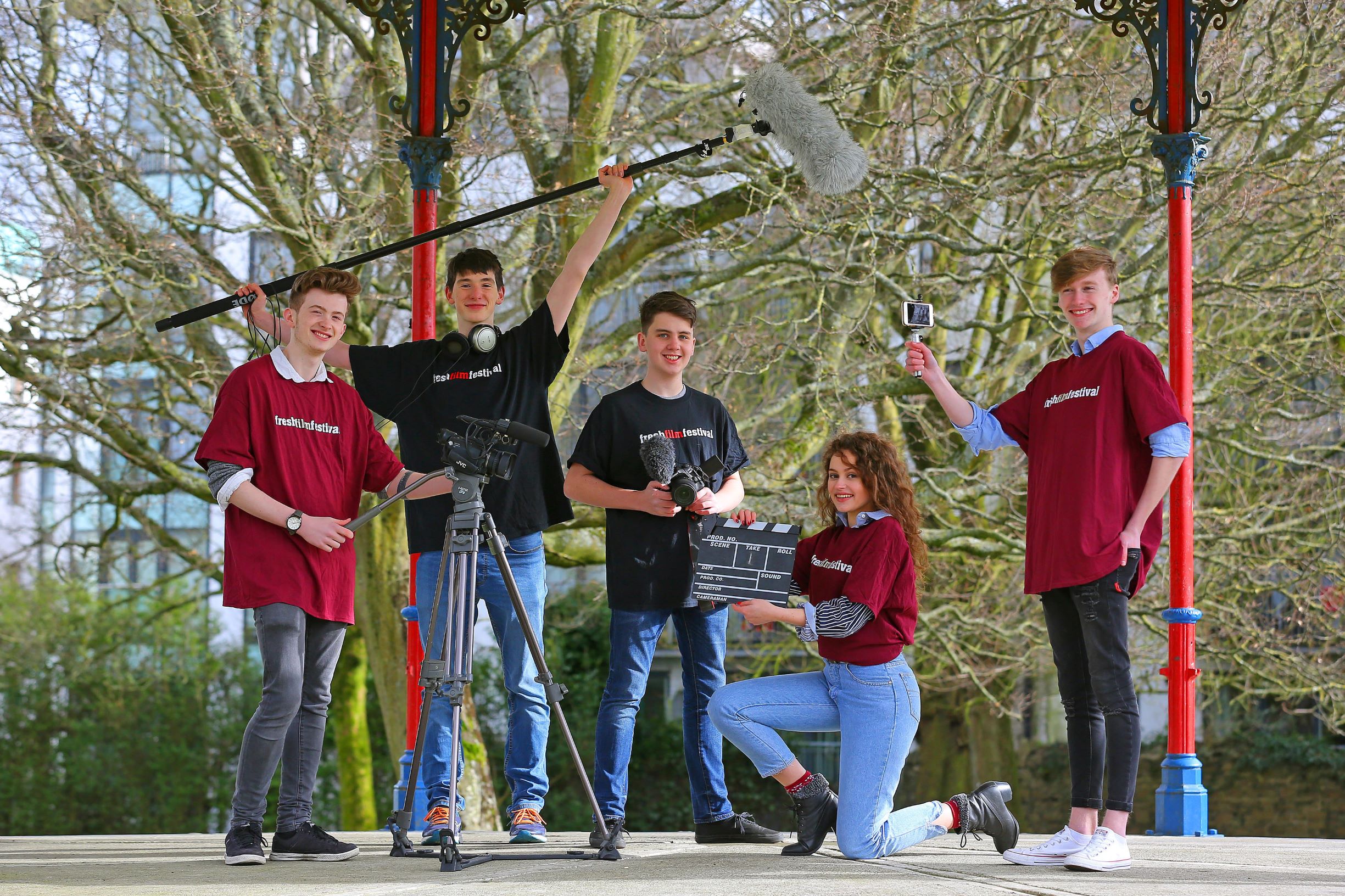 The Fresh Film Festival Limerick heats 2019 will take place at the Belltable Arts Centre on Tuesday, March 5. Pictured is Jayne Foley, Founder and Creative Director of Fresh Film Festival and Ireland’s Young Filmmaker of the Year Awards (front centre) pictured in Limerick with young filmmakers from all over Ireland. Picture: Dermot Culhane.

Fresh Film Festival, incorporating Ireland’s Young Filmmaker of the Year Awards, has received over 1,700 submissions for this year’s festival, the highest number of submissions in the festival’s 23-year history.  The Fresh screening panel has now viewed all submissions and has selected films by young filmmakers from Limerick to screen at the Regional Heat in the Belltable Arts Centre on Tuesday, March 5. The regionals heats are also taking place all this week in Leinster, Cork, and Limerick, and next week in Galway.

Films shortlisted for the final at the Fresh Film Festival Limerick Heats 2019, will be announced at the conclusion of each regional heat and will be screened at Fresh Film Festival 2019 in Limerick from March 25 to 30 and Ireland’s Young Filmmaker of the Year Awards will be presented on the March 27 and 28 during the Festival.

Other highlights of Fresh Film Festival 2019 include feature screenings and workshops, such as such as the Industry Master Class with the National Youth Film School.

Pictured is Jayne Foley, Founder and Creative Director of Fresh Film Festival and Ireland’s Young Filmmaker of the Year Awards (front centre) pictured in Limerick with young filmmakers from all over Ireland. Picture: Dermot Culhane.

Reflecting on the volume of entries for this year’s festival, Fresh Film Festival Director Jayne Foley commented, “Fresh Film Festival is all about encouraging young people to tell their stories through film, so the record number of submissions this year shows we have a nation of young storytellers with something to say and the creative means to say it.  We’ve been overwhelmed by the entries this year: The future of filmmaking in Ireland is bright!”  She went on to say, “Fresh is now an international event and we are now seeing films made by young people from Iran, China, USA, Korea and all over Europe. This year we received over 1,700 films made by young people, films that tell stories and reflect the lives of all these different cultures. This is so exciting”.

The Festival has Junior, Senior and International categories for individual and group projects.  Many young people choose to make their films independently, while others work on film projects through their school, youth group or film school.  Films must be original and can be up to 15 minutes duration for Seniors or 10 minutes duration for Juniors.  Films submitted are screened at one of the Regional Heats, which take place in Dublin, Cork, Galway and Limerick, while the finalists’ work will be screened during Fresh Film Festival in Limerick.

Fresh Film Festival encourages young people to make films by hosting an annual international film festival for young people, presenting Ireland’s Young Filmmaker of the Year Awards, acting as an advocate for young filmmakers and promoting their work worldwide.  Fresh runs a number of initiatives throughout the year, including a Hothouse programme designed to bring young people of different ages and diverse backgrounds together to share their film experiences and create new collaborative work, as well as distributing Irish films made by young people to festivals all over the world.  Fresh Film Festival is supported by the Arts Council of Ireland, Limerick City and County Council and RTE Supporting the Arts.