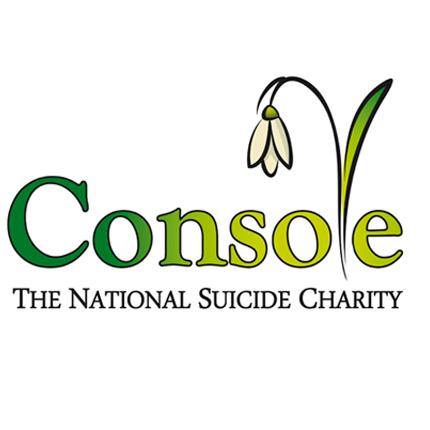 Console was established in 2002 by Paul Kelly after he had experienced the grief of losing a loved one through suicide.  Through his own loss, Paul recognised a need for a dedicated suicide Prevention, Intervention and Post intervention service in Ireland.  Console offer counselling services including talk and alternative therapy, child psychotherapy and therapeutic support groups; Suicide preventions and intervention programmes; Education and awareness programmes and a dedicated 24-hour helpline to support people in crisis and those bereaved by suicide.

The charity has a full time centre here in Raheen, Limerick, Dublin, Cork, Wexford, Galway, Kerry, Kildare, Athlone and Mayo. Console also offers Liaison services in Counties Donegal, Sligo, Leitrim, Tipperary and Clare. Counselling is available for any individual, couple, families or children who have been affected by suicide.

“In February 2015, I [Danna Blackwell] joined Friends of Console Limerick, the fundraising arm for Console Centre, The Grange, Raheen, Limerick.  Friends of Console were set up to help financially support Console Centre through events and fundraising.  My choice to Join Friends of Console was very easy, when I had gone through a particularly traumatic year in 2006 I was a young single mother with two small children grieving there was no services in Limerick that could or would take my children for counselling.  Someone recommended Console to me.  My trauma was not linked to suicide but they listened to my story and agreed to take us as a family under their wing and without that support and professional counselling, I can say hand on heart that we would not be the thriving family we are now.  I owe Console and their counsellors a lifetime of support”

“Later that year at the Transition Year Graduation for my oldest Son in St Clements College Limerick, I was amazed at all the individual projects that had taken place during the year and the organisations involved and had the idea to merge the school for a friends of Console St Clements project.  I approached Eoin O’Toole the course director and he asked me to come back in September with a project idea.  In August, I sat down with Emer O’Neill the Limerick Centre Manager and outlined my concept.  Emer was very excited about the idea and asked me to draw up a proposal that she would take internally to Console for approval.”

“Emer and I then sat down and expanded on my initial idea friends of Console St Clements project.  Emer showed me the children and adolescent therapy rooms that had recently been redecorated by the Donal Walsh Foundation.  On the wall, there was a quote by Donal “Life is a beautiful struggle”.  We decided to use this as the theme, turn it on its head, and ask the student’s is it?  Is it beautiful, is it a struggle, can it be both?  We wanted them to take inspiration from the video creation generation they are in, blogging, YouTube, Snapchat storyboards and create a two-minute snapshot of what it is that causing them to struggle and what makes it beautiful in the end.  We wanted an insight in what it is that makes teenagers happy, sad, scared, afraid or brave and how are they coping and dealing with these things.”

“A brief was drawn up for what Console would offer the students and the school for completing this project and was sent into the school.  David Tidswell who runs the Media and Drama Module for TY took up the project with great enthusiasm.  With David, Console and Friends of Console on board I then went to find sponsorship for the Prize.  A group of friends came on board for the sponsorship, two whom wish to remain anonymous, O’Mahony Insurance and Limerick Packaging. “

“Each individual video spoke in a different way and each had the unique selling point.  It was clear that the boys really had sat down and thought about their struggles, looked at what was getting them through and how they were coping.  As a unit, we were deeply moved and impressed with the level of content from young teenage boys, who were completely new to this field of media and yet managed to pull off great pieces of work.  Picking just one was very difficult but the winning video was unanimous in the end.  Matt Guillermo, Lucas Ryan McCarthy, Mohammed Angarib and Eoghan Fitzgerald tackled Bullying in their video.  The visual impact of this video and the interpretation skills used along with the highlights raised in this video were the defining reason for this.”

The boys finished off the project by completing an anonymous questionnaire to track the progress they had made during the making of their videos and where their knowledge now stands on mental health, suicide, and services available to them.  The unanimous response was how much they loved the project that they felt it was inspirational and a highlight of their year.  They felt that the objective of working as a group around this subject aided then greatly in the process, they learnt many new skills both practically in the process and for coping which was definitely the major aim.  All felt that a project centered around mental health awareness in schools would be a major benefit.

“On the 25th May 2016 at the Transition Year Graduation Night, Ciarán Austin the Director of Services for Console came down to give a small talk and present the students with certificates and  the winners were announced.  The winners, Lucas Ryan McCarthy, Matt Guillermo, Mohammed Angarib and Eoghan Fitzgeraldboys were presented with Apple iPad Air tablets.  Separately, I had organised for them to attend a private showing of Jungle Book in April with the help Olivia at The Omniplex Cinema Limerick.”

The videos were very well received by the students and patents alike and it was very emotional to see their hard work actualised on a large screen.  The hope of releasing these videos, is to highlighting the issues that our youth are struggling with; give them something they can relate to and affectively direct those who are in need, who are struggling to the right services and show that there is always hope, there is always a ear and voice and way through.