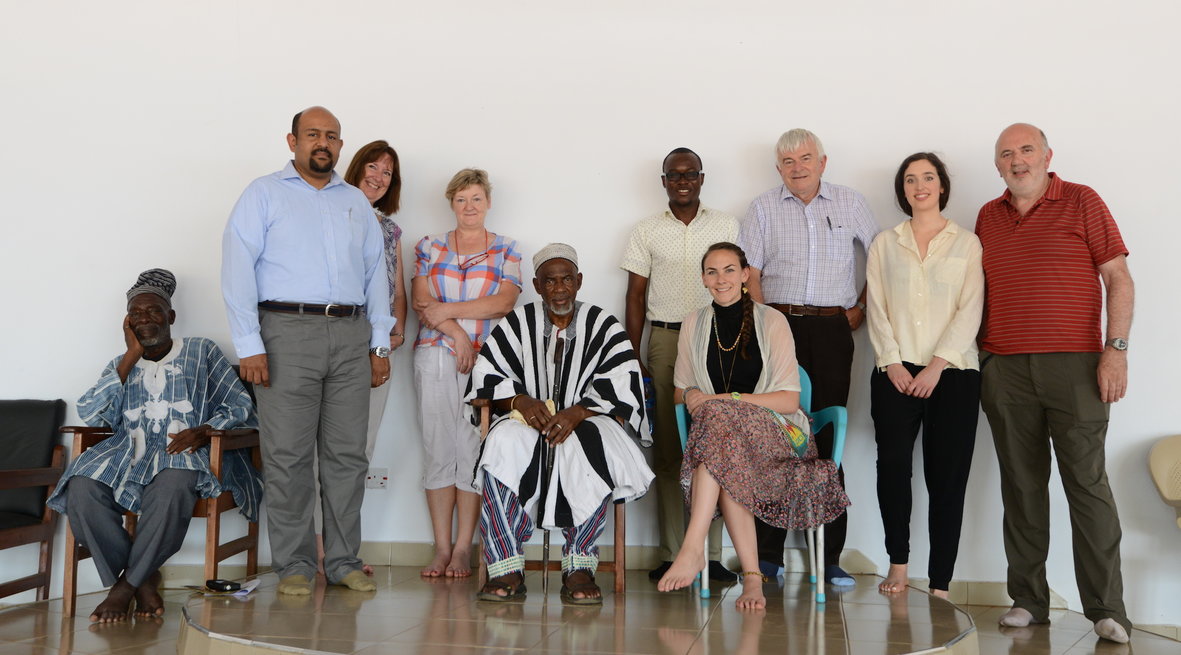 A partnership has been formed titled Friends of Ghana NGO between UL Hospitals Group, the University of Limerick and the national health service of Ghana – and will initially focus on training primary healthcare staff in basic life-saving skills in the remote Upper West Region.

Friends of Ghana NGO will operate as an independent NGO but UL Hospitals’ involvement, which has been ratified by the board, will see the realisation of the Group’s ambition to establish formal links in a developing country.

Prof Finucane said there had been “a number of false dawns” before Ghana was settled upon and the key person in making that happen was Canadian Kelly Hadfield, a second-year student in GEMS.

“Kelly is the founder of an NGO called Ghana Medical Help. She first went out there after high school and she has doing extraordinary things there ever since. She is a force of nature and almost a cult figure in northern Ghana. Kelly has been our conduit in what we are hoping to achieve, opening all kind of doors, up to and including the King’s,” said Prof Finucane.

Prof Finucane said that by west African standards, Ghana’s health service performs well and that life expectancy there had risen from 46 when it got independence in 1957 to 61 today.

But this has been achieved on “very meagre resources”, Prof Finucane said, pointing to World Bank data showing the per capita spend on healthcare in Ghana is US$58 per annum compared to US$9,403 in the United States.

And there are particular problems to overcome in rural parts of the Upper West Region, where Friends of Ghana will focus its initial efforts.

Explained Kelly Hadfield: “There are such high levels of poverty; compounded by geographical isolation and further compounded by extreme seasons with paths cut off by rivers in rainy season and so on. It means you can’t get to a hospital and that can be a major issue.”

Kelly recalled one heart-breaking case in which a low birth weight baby had died because the family could not raise the two dollars needed to travel to hospital.

“Minimising preventable deaths is what angers me the most and they are occurring every day in this region. This whole programme is about empowering locals to stop as many preventable deaths as possible. Right now, the healthcare workers who are the backbone of the service, the rural nurses at pre-hospital community level, have zero training for basic resuscitation skills or for managing trauma. And this is where the Friends of Ghana can help,” said Kelly.

Prof Finucane said: “What the people working in the system are looking for, and what we hope to provide, is training and education for people working at the most basic level, particularly in pre-hospital emergency care”.

“They are less interested in having experienced clinicians come over telling them about the latest endoscopy techniques or cardiac catheterisationtechniques. They need people who will tell them about basic life support; about stabilisation of patients and better ways of transporting people to hospital.”

A major teaching event in Ghana, to be delivered by ULHG and UL staff and students, is being planned for the summer of 2017. It will see collaboration between between practitioners and academics in medicine, paramedics, nursing and midwifery.

Colette Cowan, CEO, UL Hospitals Group, said: “Establishing a link in the developing world was a key part of our corporate social responsibility policy as a group. But we didn’t want a token project where we were just clapping ourselves on the back. We wanted something that was targeted and something that could be effective. What Paul Finucane and his team came back with was exactly what we had in mind and I was delighted to bring the Friends of Ghana project to the board for approval. We are confident that we can make a difference in Ghana and we hope to learn as much from our partners there as they will from us.”

Katie Sheehan, Operational ADON, Croom Hospital, who herself has long experience working with an NGO in Kenya, said a number of fundraising events were being planned for Friends of Ghana. This includes a Gig For Ghana, a night of live music at the Strand Hotel on February 9th next, details of which will be announced in due course.

The charity has already been donated the proceeds of the UL Hospitals’ staff charity cycle that took place during the summer.

“Another thing we are looking at is setting up a way to donate by way of a small payroll deduction. Whether it is a penny or a euro a month, it could be something that people would not miss and could go a long way towards supporting our education programme in Ghana,” said Katie.

One supporter Friends of Ghana might be able to call upon is Chris Hadfield, famous in Toronto for being the first Canadian to walk in space and famous to 350 million YouTube viewers around the world for his version of David Bowie’s “Space Oddity” while in command of the International Space Station. He also happens to be Kelly Hadfield’s uncle!

“I’m very close to him and he has been very supportive of Ghana Medical Help. Maybe he can bring his guitar to Limerick for one of our fundraisers,” said Kelly.

For more news like UL Hospitals and University of Limerick Team Up For Friends of Ghana NGO from I Love Limerick click here.