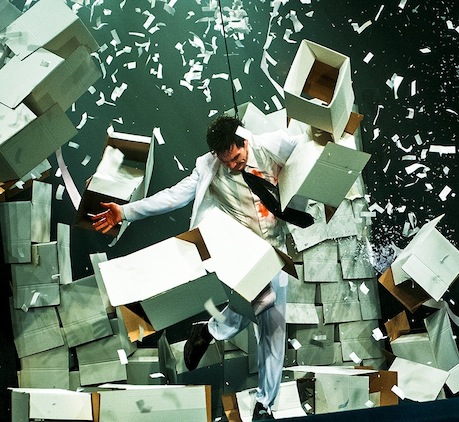 FUERZABRUTA for Limerick City of Culture 2014

FUERZABRUTA for Limerick City of Culture 2014

As part of Limerick City of Culture 2014, an industrial space in Limerick city will be re-imagined as a standalone culture factory, opening its floor for the first time in ten years to the most breathtakingly exciting, theatre spectacle in the world, ‘FUERZABRUTA’. Once the manufacturing hub of the West, the Old Dell factory will play host to the Irish premiere of world renowned sell out show, FUERZABRUTA. From Thursday 13 until Saturday March 22, the factory will be transformed, replacing the previous industrial buzz with pulsating beats and a physical and visual extravaganza never seen before in this country, breathing new energy and vitality into the 350,000 sq. foot space. Created by Diqui James, FUERZABRUTA, is an all-standing out-standing rave of a show. Famed for its majestic stage sets and high-end theatrical extravaganza, the FUERZABRUTA team have created a show inspired by raw energy and creative innovation. Featuring mind-blowing visual effects from a Kafkaesque suited figure bursting full throttle through a series of moving walls to figures swooping through the shadows and a hugely impressive watery world suspended just inches above the audience’s heads, all set to a thumping soundtrack. Get set for astonishing performances from a show that boasts mind-blowing visual effects that must to be seen to be believed. FUERZABRUTA has been unleashing a mind blowing experience on audiences in sold out shows across the globe since its premiere in Buenos Aires in 2005, and is currently the fastest-selling show ever at London’s ‘The Roundhouse’. You may get wet, you may get dirty – bring friends and dancing shoes and prepare for visual and sensory overload. It is an event where worlds collide, where dreams are real, and reality takes a back seat. Don’t miss your once in a lifetime chance to experience this electrifying show in Limerick. Give in to it, let go and enjoy the ride. Tickets are €28/€20 concession plus booking fee are on sale now and are available to purchase from Eventmaster.  See www.limerickcityofculture.ie for full details. Times and dates below.

All tickets are unreserved standing.

FUERZABRUTA is a standing show which contains scenes of mild nudity and violence with strobe lighting and loud music, therefore is not recommended for young children.

Strobe lighting is used repeatedly throughout the show. There is also water involved in the performance – please keep electrical items in a safe place.