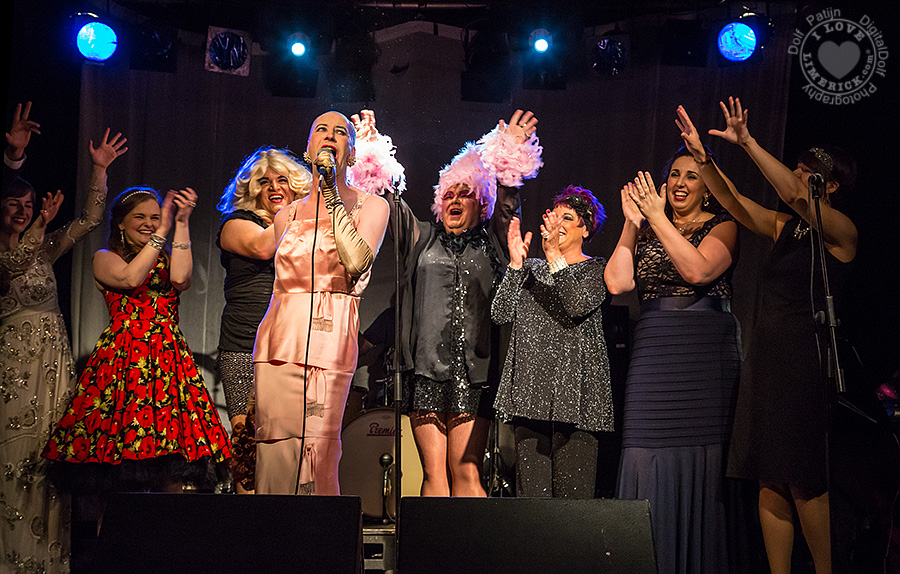 The Lime Tree Theatre fundraising gala for Language UnBecoming A Lady, a play written and performed by Myles Breen, hosted a performance of the play, which is a Bottom Dog Theatre production on Thursday August 27, to help take the play to New York.

The fundraising gala for Language UnBecoming A Lady not only included a performance of the play at the Lime Tree Theatre, Mary Immaculate College (MIC), but also included a pre-show drinks reception. A post-show cabaret took place afterward at Dolan’s Warehouse, where the audience were treated to a never before seen performance.

Speaking about the Gala on on Thursday August 27, Myles Breen, the play’s sole writer and performer, said at the launch of the Gala in May 2015: “Mentioned in the play is the Divine Diana, Robert’s alter ego. An after-show party will be held in Dolan’s Warehouse where we’re going to be doing the world premiere of The Divine Diana show. So you get two shows for the price of one, and I’ll be in a dress in both of them”. (See below for details on how to buy tickets.)

Funds raised from the event will go toward taking the play to the Cell Theatre in Manhattan, from September 14 – 27.

An Indiegogo campaign has also been created, with the hopes of raising funds to travel the play abroad. Myles says about the play, on the Indiegogo website:

“Hi. It’s Myles! As friends and colleagues, many of you know I wrote and performed this play for the first time in 2009 as part of Limerick’s annual Pride festival. Directed by my colleague Liam O’Brien (who many of you also know – just not as well as me!) our small show played for just four nights at the offsite Belltable Space in Limerick. Completely sold out and consecutive standing ovations later, I was overwhelmed by the response from local audiences. And so began a love affair with ‘The Divine Diana’ that has taken the show across the country to 19 venues, 55 performances and audiences over 5000 people.”

Liam O’Brien, director of the play, said: “It’s an incredibly exciting piece of work, it’s never been more relevant in the wake of the monumental ‘Yes’ vote for marriage equality in this country, and it is very much a Limerick story that we are going to share internationally”.

The play will be held in New York City, from September 14 – 27, as part of the Origin’s First Irish Theatre Festival. The Origin Theatre Company, established in 2002, is a gateway to America for contemporary European Theatre. George C. Heslin, founder of the Origin Theatre Company, said at the launch: “Since 2002, we’ve presented work from 17 European countries and work from over 150 playwrights, most of them new works and new commissions”.

In an effort to maintain transparency with costs, and working to ensure that people are comfortable with donating, the remaining costs are laid out so people can know where the funds are going. It is said on the site:

“We’ve just received notice that we have been generously supported by Culture Ireland who will cover our flights and accommodation in New York.  We’re incredibly grateful for this support and are delighted to announce it here. But we still have a significant amount to raise to cover the remaining costs of taking a show abroad. It adds up surprisingly fast once you consider venue fees, US visas, insurance, a mandatory equity stage manager and marketing and production costs. Our travelling team comprises of our actor, director (also operating sound) and lighting designer – who are not receiving any fees for their work, as we are not asking you to pay our wages – but Bottom Dog aren’t currently in the position alas to cover the rest of the touring expenses.”

Every donation, no matter the size, is always appreciated and everyone involved in the play is grateful. Liam wrote on the Indiegogo campaign site:

“Over to the director! Liam here. As well as echoing everything Myles has said, I want to personally thank you for your time in considering supporting us.

Bottom Dog Theatre Company have been producing theatre in Limerick for 7 years. As an unfunded company we survive on the patronage of our audiences, partner venues and sponsors. We have toured across the country with shows such as What Happened Bridge Cleary, Romeo & Juliet, Porkville and of course Language UnBecoming A Lady and in this short time have been nominated for multiple Irish Theatre Awards in the process, playing most venues throughout Ireland – and nowhere we enjoy as much as at home.

But to receive an international platform for our work – and importantly as local artists who live and create in the city – benefits the entire Limerick arts community. Staging works of excellence abroad, making international theatre connections and opening the door for future Limerick companies, actors and technicians to bring their work to New York through the new Culture Connect Limerick programme, are all reasons why your support will be far reaching after September..

For anyone who has worked with us or supported us in the past, you know that we give our audiences value and entertainment in equal measure. We are proud to have this opportunity to build on your support over the last 7 years to promote ourselves and the Limerick theatre community in America, and we also promise to do you proud.

To that end, the support you can offer us now through this campaign will be equally rewarded with perks at all levels and price tags – from personal performances, to corporate sponsor packages. So have a look and see what you can do. No amount is too small. Or indeed too big. And we’re happy to chat in person about what else we might be able to offer you or your company down the line to return your gratitude.”

To read more about the Lime Tree Theatre, click here

To book tickets for the fundraising gala at the Lime Tree Theatre, click here

Photos by Billy Butler, for I Love Limerick. All Rights Reserved.